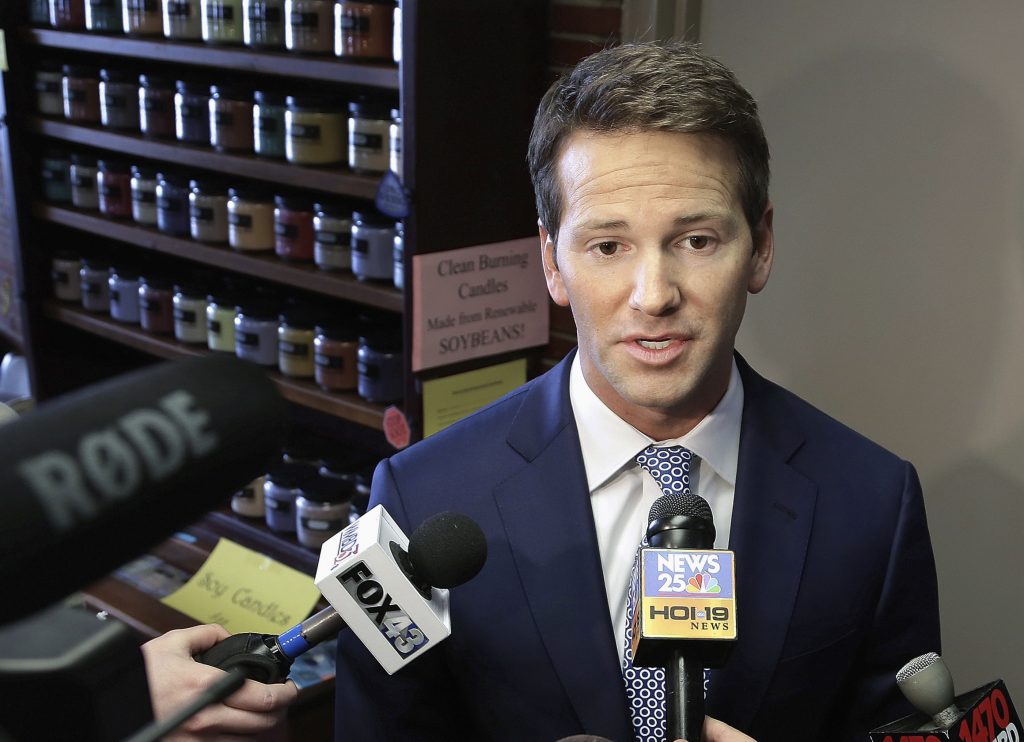 The indictment of a 35-year-old disgraced former Republican congressman jolted residents of his central Illinois district, shaken by prosecutors’ claims that Aaron Schock illegally dipped into campaign and government coffers to subsidize a lavish lifestyle.

Perhaps more stunning was an allegation found on page 34 of the charging document: Schock’s apparent willingness to pocket thousands of constituents’ dollars by arranging annual Washington tours combined with meet-and-greets.

“I know that some people feel very hurt, angered and betrayed,” said Quincy insurance agent Jack Freiburg, who attended such an event in 2014.

State political observers say the alleged scheme stands out — even with Illinois’ long-established reputation for corruption, including a former governor’s attempt to sell President Barack Obama’s U.S. Senate seat. House rules require excess fees from such visits be returned to constituents or donated to charity.

“That’s a new one on me,” said David Melton of Illinois Campaign for Political Reform. “I have never heard of anything quite that audacious.”

The three-day extravaganza attended by Freiburg and about 50 others in July 2014 included bus rides to the National Zoo and a reception at the Japanese ambassador’s residence. Freiburg paid a $785 “Fly-in Conference Fee” to Schock’s office — meant to cover meals, transportation and other hosting costs — on top of $2,000 to $3,000 for a plane ticket, hotel room and other expenses.

Schock, the once-rising GOP star and prodigious party fundraiser, secretly kept at least $11,000 from that event, the indictment said.

Freiburg recalled that many on the trip were well off, but others weren’t, including several recent college graduates. “Some sacrificed financially to go,” the 63-year-old said.

Prosecutors say that in 2011, Schock set up a Florida bank account under the name of a fictitious company, “Global Travel International,” and instructed staff to deposit that year’s fly-fee money into it. He allegedly kept at least $4,482 from the 2011 fly-in, which happened in the same month he appeared on the cover of a men’s health magazine, which boosted Schock’s profile nationally.

Schock, who resigned last year as scrutiny of his spending intensified, issued a statement on Nov. 10 responding to the charges of wire fraud, theft of government funds and other things, saying, “We might have made errors” but that “no one intended to break any law.” Schock’s lawyer, George Terwilliger, did not immediately respond to voicemail messages seeking comment on the fly-in fee accusations.

Freiburg remembers how quickly and easily Schock made it on the political stage. His first victory was at age 19 for a seat on the Peoria School Board, and he became the youngest member of Congress after winning in 2008 at age 27. “He was so very charismatic — such a bright, shining star,” Freiburg said.

Schock successfully marketed himself during six years in Congress as an unwavering fiscal conservative. A 2012 campaign flier claimed that his frugality started as a farm kid, saying he saved up $4,000 and invested it in his own IRA when he was 14. But the indictment paints a picture of him treating his elected office as a kind of ATM.

He allegedly spent $40,000 in government funds to redecorate his office, including $5,000 on a chandelier, and used $8,000 in campaign cash to take a private plane from Peoria to Washington because he feared missing a connecting flight to Europe. The indictment also says he bought four football game tickets in January 2014 for $10,025 with campaign funds and resold them at a $1,975 profit.

A 2011 Pekin Area Chamber of Commerce news release says at least half a dozen members attended Schock’s fly-in that year. Messages left for several of them seeking comment weren’t returned. One man who went, Bill Fleming, said he didn’t detect much dwelling on Schock these days — even after the indictment: “Everyone has moved on.”

Freiburg says he’s more disappointed than anything, and suspects early fame went Schock’s head. A conviction on just one fraud count carries a maximum of 20 years behind bars.