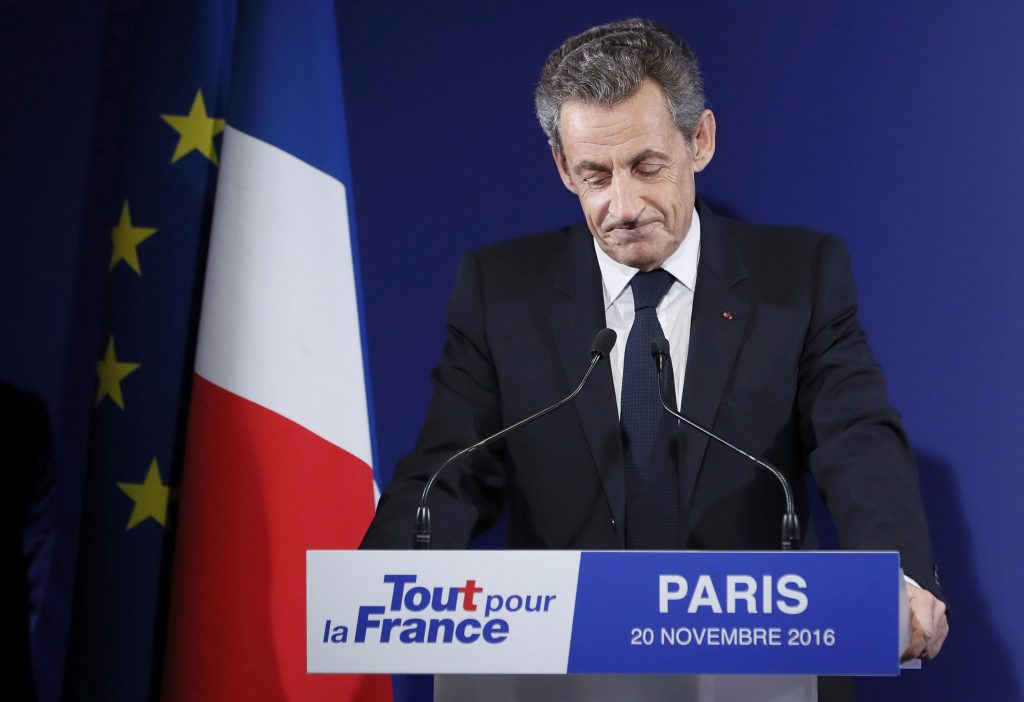 The two candidates confirmed as winning the most votes advance to the Nov. 27 runoff.

In a speech from his campaign headquarters in Paris on Sunday, Sarkozy called on his supporters to vote for Fillon in the second round.

“I did not succeed in convincing a majority of voters. I do respect and understand the will of those (voters) who have chosen for the future other political leaders than me,” Sarkozy said.

Fillon has enjoyed a strong boost in popularity in recent weeks thanks to his image of authority and seriousness compared to Sarkozy’s more brazen demeanor.

The campaign had been marked by concerns about immigration and Islamic terrorism.

Donald Trump’s election as president of the United States was on many voters’ minds, as France faces its own wave of populism that has emboldened an outsider with an eye on the presidency. Countries around Europe are facing similar anger at immigrants and the political establishment, and are watching the French presidential race closely.

Across France on Sunday, lines were long at many polling stations as voters chose among seven candidates.

The conservative nominee is expected to have strong chances of winning the April-May presidential election, because traditional rivals on the left have been weakened by Socialist Francois Hollande’s troubled presidency.

The conservative candidate’s main challenger may turn out to be far-right leader Marine Le Pen, who is hoping anti-immigrant, anti-Muslim and anti-establishment sentiment can propel her to the presidency. Le Pen, official candidate of her once-pariah National Front party, did not take part in the conservative primary.

The conservatives’ campaign has focused on immigration and security concerns following recent attacks by Islamic terrorists.

The same issues are being hotly debated throughout Europe. Concerns about migration helped drive Britain’s vote to leave the European Union, and are weighing on upcoming elections elsewhere. German Chancellor Angela Merkel is expected to announce Sunday her plans to seek a fourth term next year, as she seeks to counter populism after opening her country’s doors to refugees.

Other candidates in the French vote were Nathalie Kosciusko-Morizet, the only woman on the conservative ballot; former government ministers Bruno Le Maire and Jean-Francois Cope, and Parliament member Jean-Frederic Poisson.

Sarkozy hoped to pull votes from people attracted to Le Pen. He called for stricter immigration rules across Europe, and vowed to ban Muslim women from wearing headscarves at universities and possibly elsewhere.

Fillon pledged to organize a referendum on a quota system for immigrants.

In contrast, Juppe advocated a more peaceful vision of French society, based on respect for religious freedom and ethnic diversity.

On the economic front, all candidates want to lower taxes — especially on businesses — and reduction in the number of public servants. The leading candidates also agree on giving managers more flexibility by loosening the 35-hour weekly limit on employees’ working time.