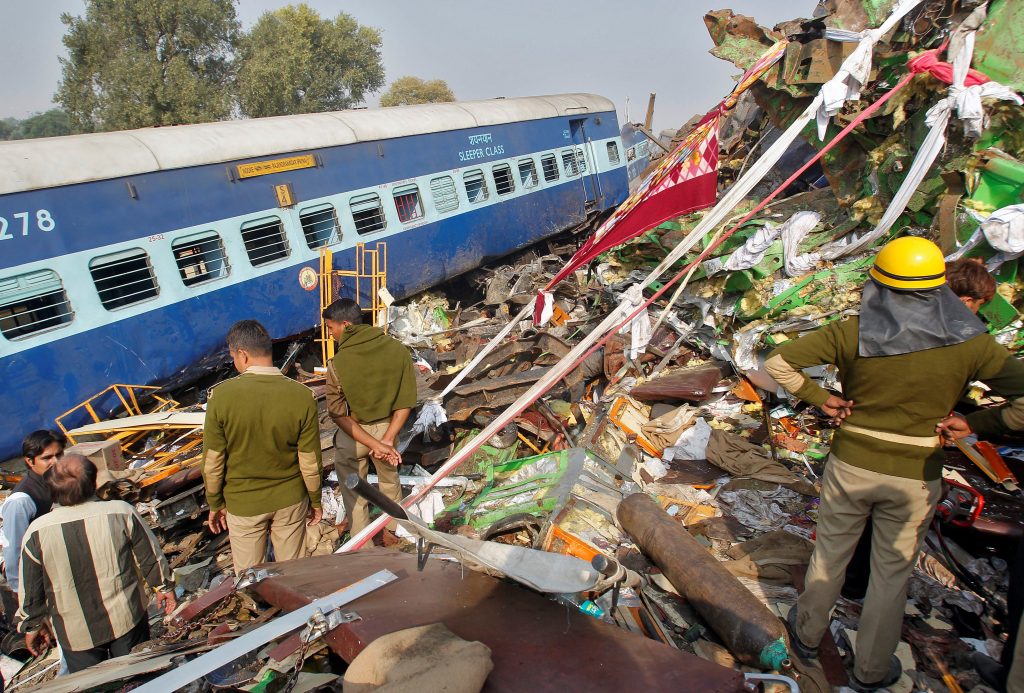 At least 104 people were killed when 14 coaches of an overnight passenger train rolled off the track in northern India on Sunday, with rescue workers using cutting torches to try to pull out survivors, police said.

Daljeet Chaudhary, a director general of police, said the death toll was likely to rise because rescue workers had yet to gain access to one of the worst-damaged coaches. About 150 people were injured, he said.

The train derailed at around 3:10 a.m., jolting awake passengers who had settled in for the long trip. The bodies were retrieved from mangled coaches that had fallen on their side.

Some of the coaches crumpled when they crashed into others, trapping hundreds of people inside.

“We are being very careful in using the cutting torches,” Chaudhary said.

The derailment occurred near Pukhrayan, outside of Kanpur, an industrial city about 250 miles southeast of New Delhi. The Patna-Indore Express train, linking the central Indian city of Indore to the city of Patna to its northeast, completes its 845-mile journey in 27 hours.

Medical teams were providing first aid near the site, while the more seriously injured were moved to hospitals in Kanpur, Chaudhary said. Of the roughly 150 injured, 72 were in serious condition, he said.

Police were having a hard time keeping away hundreds of people from nearby villages who were the first to reach the accident site. “We have cordoned off some areas near the coaches to keep people from hampering the rescue efforts,” Chaudhary said.

Prime Minister Narendra Modi expressed his concern over the derailment.

“Anguished beyond words on the loss of lives due to the derailing of the Patna-Indore express. My thoughts are with the bereaved families,” Modi wrote.

Kanpur is a major railway junction, and hundreds of trains pass through the city every day. After the derailment, several trains using the line were diverted to other routes, Anil Saxena, spokesman for Indian Railways, said in New Delhi.

It was not immediately clear what caused the coaches to derail. Rail authorities have ordered an investigation into the accident, Saxena said.

Accidents are relatively common on India’s sprawling rail network, which is one of the world’s largest but lacks modern signaling and communication systems. Most crashes are blamed on poor maintenance and human error.

Trains are the most popular mode of transport for millions of Indians, with around 23 million using the country’s vast railway network every day.

In 2012, an Indian government report said about 15,000 people are killed every year in railway accidents, caused by outdated equipment and overstretched staff.

Prime Minister Modi has pledged to invest $137 billion over the next five years to modernize India’s railway network, the world’s fourth largest.