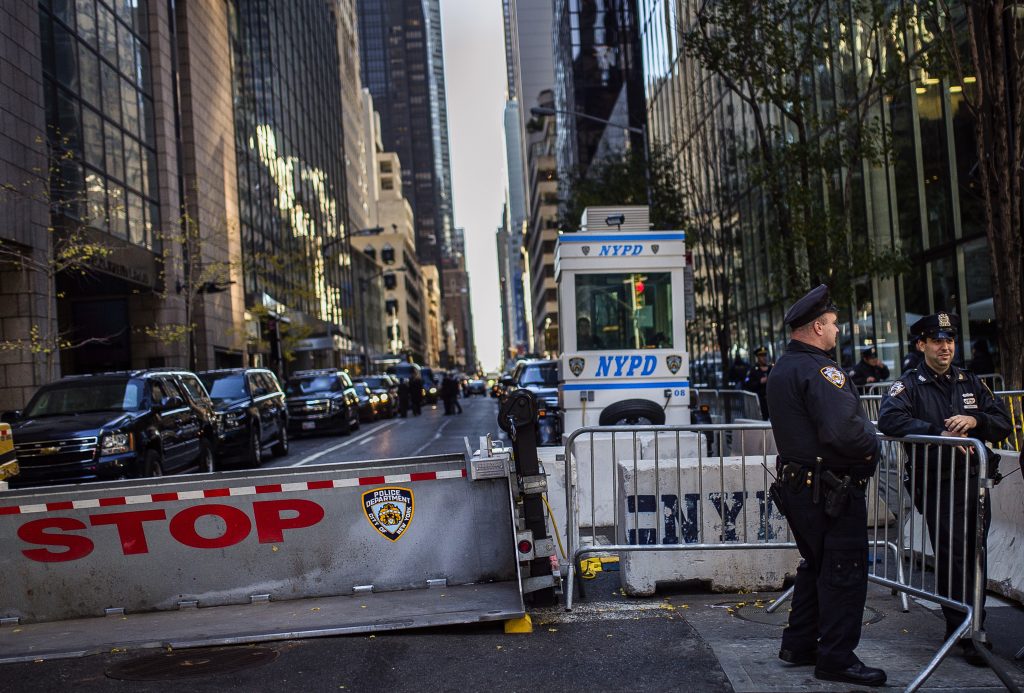 The phalanx of police officers armed with assault weapons, bomb-sniffing dogs and concrete barricades causing congestion and other headaches outside Donald Trump’s home will remain in place at least until his inauguration in late January, city officials warned on Friday.

It’s a situation that has put the Republican president-elect’s hometown in the position of asking his new administration to pay ongoing costs for what Democratic Mayor Bill de Blasio called an unprecedented security effort for a U.S. president’s unofficial residence.

“We’re being asked to do something on a scale that’s never been done before,” the mayor said at a news conference with NYPD and Secret Service officials.

The mayor spoke at a command center at NYPD headquarters where four video monitors carried live feeds of the intersection outside Trump Tower, in midtown Manhattan. The monitors showed how police have closed two of Fifth Avenue’s five lanes, completely barricaded the block where residents have a private entrance and set up checkpoints manned by officers in guard booths.

The measures, largely intended to fortify Trump Tower in a terror attack, have slowed motor and foot traffic outside and raised concerns among retailers it could hurt business during the year-end shopping season. Anti-Trump demonstrations have shut down Fifth Avenue entirely at least three times in the past 10 days.

Authorities are still refining their tactics to minimize inconveniences to workers and shoppers through late January. In the immediate aftermath of the election, Trump Tower’s entrance was walled off by dump trucks filled with sand and its atrium was closed to tourists, measures that were lifted within a couple of days.

What happens after the inauguration will depend on how the new president divides his time between his high-rise apartment and the White House, officials said. Depending on the answer, the NYPD might create a new command assigned full time to securing Trump Tower.

Officials also said they have begun exploring ways to get federal help in covering potentially huge overtime costs for the nation’s largest police department. Similar reimbursements have been made in the past for large-scale events like Pope Francis’s visit to the city last year.

“I think the federal government will recognize that the NYPD is carrying a burden for the entire nation,” De Blasio said.

The mayor predicted New Yorkers would shrug off the hassle of protecting Trump.

“After we get through legitimately grumbling, we’ll go on with our lives,” he said.