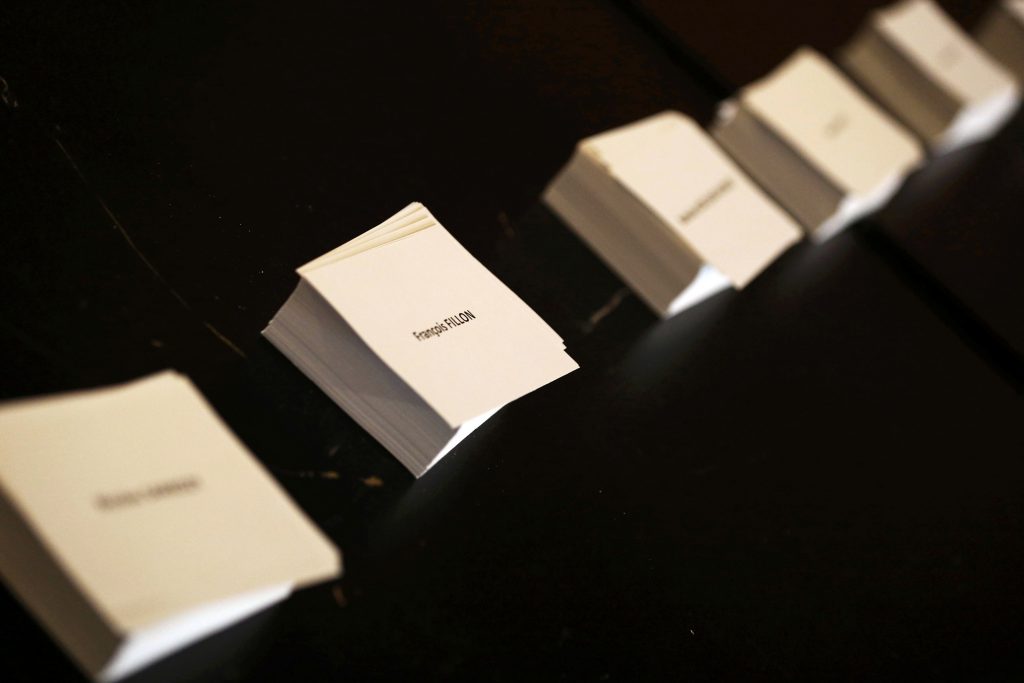 Conservative presidential hopefuls in France face the judgment of voters in a primary race on Sunday and the victor looks likely to win the presidency in next spring’s election against a resurgent far-right.

With the French left in disarray under the deeply unpopular President Francois Hollande, opinion polls suggest that the center-right presidential nominee will meet and defeat the National Front’s euroskeptic, anti-immigration leader Marine Le Pen in a runoff for the Elysee palace next year.

Even so, after Britain’s shock “Brexit” vote and Donald Trump’s surprise U.S. election win, the French presidential vote is shaping up to be another test of strength between weakened mainstream parties and rising populist forces.

Former prime minister Alain Juppe, a moderate conservative, had appeared firmly on track to win the nomination of the Les Republicains party. But over the past week the contest has been transformed into a nail-biting three-horse race.

Fillon promises to do away with the 35-hour workweek, cut half a million public sector jobs and slash the cost of government – tough sells in a country where proposals for market-oriented reform often arouse protests.

“I’m tagged with a liberal label,” Fillon told a rally in Paris on Friday. “But I’m just a pragmatist.”

For weeks, the bruising campaign battle focused on the duel between Juppe and Sarkozy. The two men present very different policy platforms to counter the populist tsunami that threatens mainstream parties in Europe.

Against a backdrop of deadly militant attacks on home soil and Europe’s migrant crisis, Sarkozy, 61, styles himself as the voice of France’s “silent majority.”

He vows to ban the Muslim veil from public universities and wants to renegotiate EU treaties, reining in the powers of the European Commission and reforming the Schengen free-travel zone.

At a rally in the southern city of Nimes on Friday he warned of a France whose “identity and unity are threatened.”

“Political Islam is doing battle against our values. There’s no room for compromise,” he said, speaking in a region that has produced one of the far-right’s two National Assembly lawmakers.

Juppe, 71, has sought to galvanize the political center-right, rejecting the “suicidal” identity politics of Sarkozy that he says will deepen rifts between France’s secular state and religious minorities.

But Juppe has struggled to rouse the passions of voters and all the momentum was against him on the eve of the vote.

“France needs far-reaching and radical reforms,” Juppe told supporters in the northern city of Lille. “But be careful of going too far, we must remain credible.”

An admirer of late British Prime Minister Margaret Thatcher, Fillon headed Sarkozy’s conservative government between 2007 and 2012. He promises cost-cutting on a scale to which his rivals do not dare commit in a country with one of Europe’s highest public spending levels.

Much will depend on turnout at the 10,228 polling stations. It is the first center-right primary in which anyone who pays 2 euros and signs a paper of allegiance to the party’s values can vote.

Juppe needs a high turnout beyond core party supporters to win. A runoff will be held on Nov. 27 if, as expected, none of the seven candidates wins more than 50 percent of the vote.

An Ifop-Fiducial survey on Thursday forecast an evenly split vote if Juppe and Fillon go head-to-head in a second round. Fillon would comfortably beat Sarkozy, the survey showed.

Should Sarkozy or Fillon emerge as her conservative opponent, polls and analysts suggest, LePen’s electoral prospects would improve.