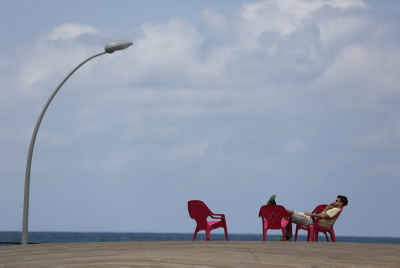 Panic swept the Tel Aviv port Motzoei Shabbos as hundreds of people ducked for cover, fearing that a terror attack had just occurred. Loud shouts from one of the many cafés in the area – which turned out to be an altercation between patrons and a waiter – were misinterpreted by passerby as shouts that a stabbing or shooting had just taken place. Rumors spread like wildfire that a terror attack was underway, and hundreds of people began running away from the port area.

Police descended on the site, trying to control the situation and searching for the source of the panic. They eventually found it – a loud argument between a group of diners and a waiter at one of the cafés in the port. Police detained the five members of the group and the waiter, and spread the word that there was no attack.

On Shabbos, terrorists opened fire at a police van parked at a checkpoint near Har Hazeisim in Yerushalayim. No one was injured in the attack, but the van was damaged. Arabs also attacked police vehicles in the Abu Dis neighborhood of Yerushalayim. No injuries or damage were reported.

Late Friday, Gaza sources claimed that an Arab rioter was killed by Israeli forces near the security fence in Gaza. The IDF said that the Arab was part of a group engaged in violent behavior, throwing rocks at Israeli soldiers on patrol near the border fence. The army said that it opened fire at the group but that no rioters were hit by Israeli bullets.