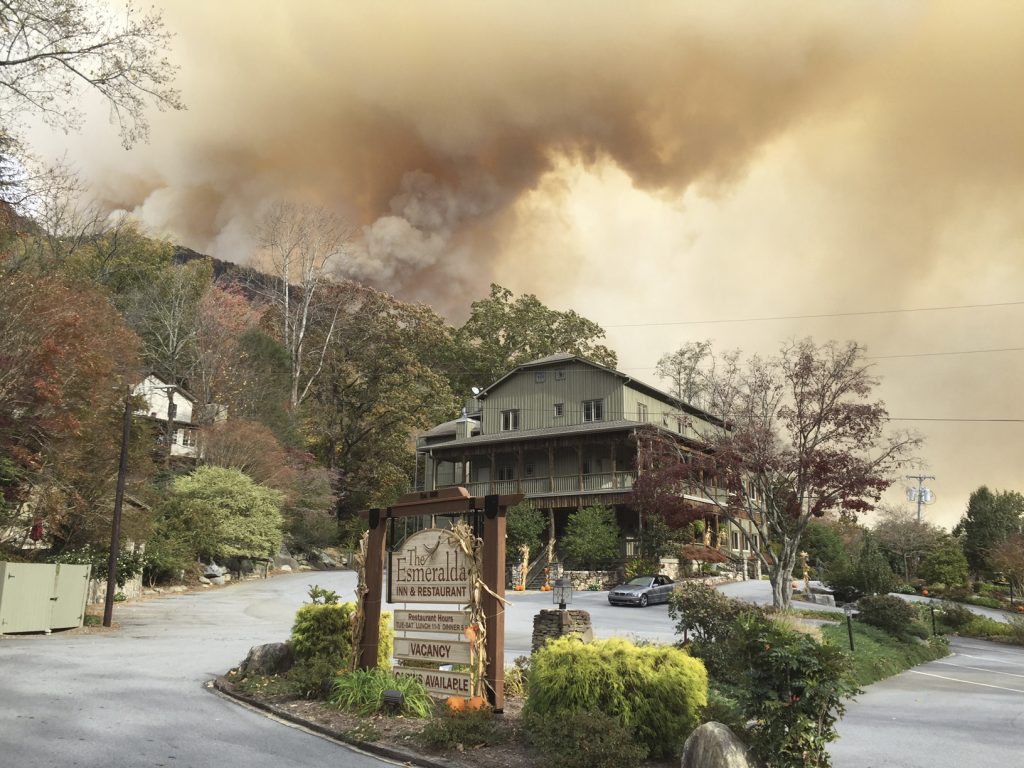 Guests came to the Esmeralda Inn & Restaurant in Chimney Rock to see late fall colors in the crisp mountain air. But they ended up evacuating in a smoky haze.

That Friday, Cason looked back as he drove away. Flames and plumes of smoke dwarfed the inn from the mountainside behind.

“I was looking at my inn, not knowing if I was telling it goodbye or we’d be back,” said Cason, who owns the inn with his wife, Kim.

“You’ve put blood, sweat and tears in for years, and to look back and go, ‘L-rd, I don’t know if you’ve got me coming back or not’ — that’s not a good feeling.”

For about a week now, Chimney Rock, part of the Lake Lure area outside Asheville, has been virtually deserted in a smoky haze as dozens of wildfires burn an estimated 190 square miles across the Southeast. Stores and restaurants are closed, and houses show no signs of life. The only visitors are firefighters from across the country. About 1,000 people were evacuated, and officials were allowing them to come back into the area Saturday afternoon.

The shroud of smoke is making a dent in the tourism economy — which thrives during the fall season in much of the affected area — but Lake Lure could be taking the most concentrated hit. Elsewhere, several officials called the smoke annoying but say it hasn’t been deterring all the visitors.

Kentucky officials said they nearly set a record for deer harvest in last weekend’s opening of the season. In Tennessee’s Great Smoky Mountains, attendance at a festival is higher than projected, regardless of smokiness. In the north Georgia mountains, the Mountain Oasis Cabin Rentals group said there’s been essentially no effect on bookings.

On a positive note, nothing in the Lake Lure area has been burned down or damaged by the fires, said Cason, who serves as Rutherford County’s top tourism official. Still, a dry, windy weekend forecast is keeping the community watching nervously.

Most inns have closed. The 1927 Lake Lure Inn & Spa is open — but to provide shelter for firefighters who have come to the region to help. On Tuesday night, the inn fed 810 firefighters, manager Patrick Bryant said.

The inn, about 100 yards from the makeshift compound set up for firefighters and the supporting agencies, also is housing evacuees. Bryant said some people have canceled plans, but two weddings scheduled for this weekend were still on. So is next week’s Thanksgiving buffet.

For The Esmeralda Inn, fire is a familiar foe. Almost a century ago, the inn was rebuilt from its foundation after a fire destroyed it. The inn again burned to the ground in 1997. It was rebuilt to keep its old character.

Other innkeepers, family and friends have been opening their doors to the Casons while the fire keeps blazing.

“We have restaurants, retail shops, everybody trying to just really get back into their businesses, get things cleaned up and get back open,” Cason said.