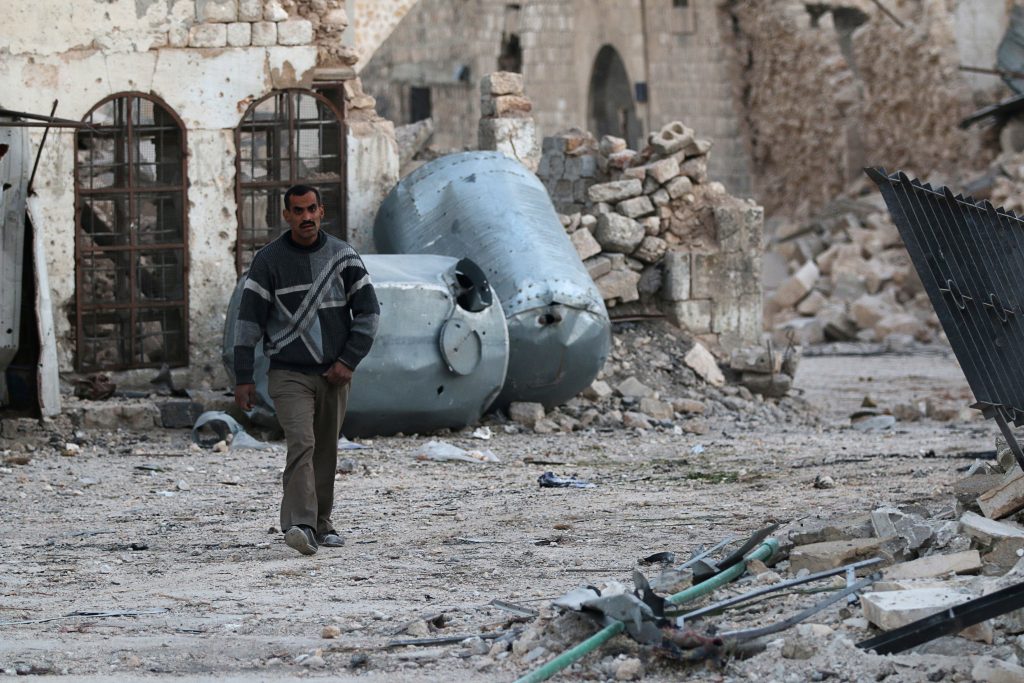 All hospitals in Syria’s besieged rebel-held eastern Aleppo are out of service after days of heavy airstrikes, its health directorate and the World Health Organization (WHO) said, though a war monitor said some were still functioning.

Intense airstrikes have battered the eastern part of the city since Tuesday, when the Syrian army and its allies resumed operations after a pause lasting weeks. They launched ground attacks against insurgent positions on Friday.

The war monitor, the Britain-based Syrian Observatory for Human Rights, said at least 27 people, including children, had been killed in eastern Aleppo on Saturday by dozens of airstrikes, barrel bombs and artillery rounds.

Warplanes, artillery and helicopters continued bombarding eastern Aleppo on Saturday, hitting many of its densely populated residential districts, the Observatory said. There were intense clashes in the Bustan al-Basha district, it added.

“This destruction of infrastructure essential to life leaves the besieged, resolute people, including all children and elderly men and women, without any health facilities offering life-saving treatment … leaving them to die,” said Aleppo’s health directorate in a statement sent to Reuters late on Friday by an opposition official.

Elizabeth Hoff, the WHO representative in Syria, said on Saturday that a U.N.-led group of aid agencies based over the border in Turkey “confirmed today that all hospitals in eastern Aleppo are out of service.”

The monitoring group said some hospitals were still operating in besieged parts of Aleppo but said many residents were frightened to use them because of the heavy shelling.

Medical sources, residents and rebels in eastern Aleppo said hospitals have been damaged by airstrikes and helicopter barrel bombs in recent days, including direct hits on the buildings.

“The United States again joins our partners … in demanding the immediate cessation of these bombardments and calling on Russia to immediately de-escalate violence and facilitate humanitarian aid and access for the Syrian people,” Rice said in a statement.

British Foreign Secretary Boris Johnson wrote that reports of airstrikes hitting civilians and hospitals in east Aleppo were “sickening” and called for a return to diplomacy.

However, with the United States awaiting the inauguration in late January of President-elect Donald Trump, who has been critical of Washington’s Syria policy without laying out detailed plans himself, diplomatic efforts appear stalled.

Staffan De Mistura, the special envoy of the U.N. secretary general, is likely to meet Syrian Foreign Minister Walid al-Moalem in Damascus on Sunday after recent talks in Turkey and Iran, another diplomat said.

“He will push on Aleppo, perhaps on a ceasefire, but on the political file there won’t be anything until [U.N. Secretary-General Ban Ki-moon’s successor Antonio] Guterres is in office,” the diplomat said.

Both Russia and Assad’s government have denied deliberately targeting hospitals and other civilian infrastructure during the war, which began in 2011 and was joined by Russia’s air force in September 2015.

The charity Doctors Without Borders said in a message that there had been more than 30 hits on hospitals in eastern Aleppo since early July. “Doctors are few and medical supplies are depleted, with no possibility of sending more supplies in,” it said.

Health and rescue workers have previously been able to bring damaged hospitals back into operation but a lack of supplies is making that harder.

The Syrian war pits Assad and his allies Russia, Iran and Shiite militias against Sunni rebels including groups supported by the United States, Turkey and the Gulf monarchies and also jihadist groups.

Aleppo, for years split between a rebel-held east and government-held western sector, has become the fiercest front.

An army offensive backed by a major aerial bombardment from late September to late October killed hundreds, according to the United Nations, and tightened the siege, leaving eastern Aleppo with little food, medicine or fuel.

A rebel counterattack early this month involved shelling that killed dozens of civilians, the U.N. said, but it quickly petered out and the army and its allies, including Hezbollah and Iraqi militias, reversed all insurgent gains in about two weeks.

Syrian state media said on Tuesday the air force had targeted “terrorist strongholds and supply depots” in Aleppo. Russia has said its air force is only conducting airstrikes in other parts of Syria. The Damascus government describes all the rebels fighting it as terrorists.