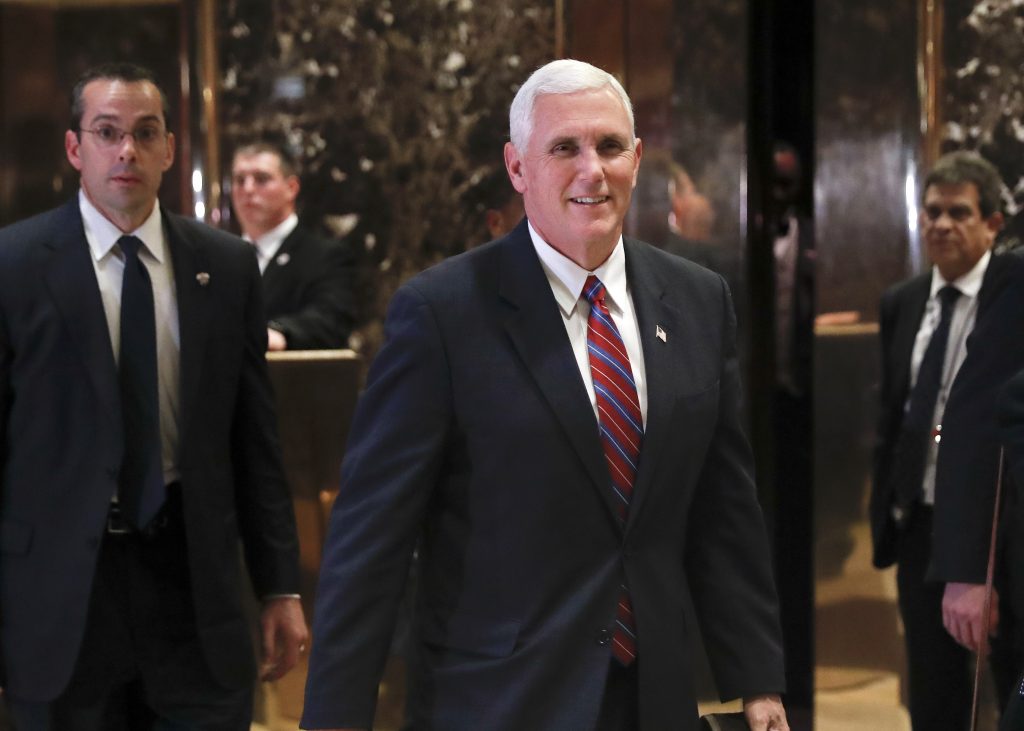 Vice President-elect Mike Pence told House Republicans in a closed-door meeting Thursday to be ready to move a lot of legislation next year.

“We’re going to move an agenda” focused on rebuilding the military and improving the economy, Pence told reporters after the meeting.

In his remarks to House Republicans, Pence talked about how he and the new administration wanted members to “buckle up,” and get ready for a speedy start on policy. He also solicited suggestions for candidates to fill administration posts.

“Donald Trump is a man of action and we’re counting on you,” Pence said, according to Ways and Means Chairman Kevin Brady. The Texas Republican said that Pence mentioned a tax overhaul and Obamacare, but didn’t get into specifics.

Pence, a former House member himself, returned to the U.S. Capitol Thursday to visit with House Republicans, and he plans to meet later with top Democratic leaders in the House and Senate.

Pence’s closed-door meeting with Speaker Paul Ryan and other House Republicans reflected his vital role helping President-elect Trump forge a relationship with Congress. His visit was squeezed in even as Pence is overseeing the building of a Trump administration.

Pence didn’t mention Trump’s campaign promise to build a wall on the Mexican border, according to Representative Lou Barletta of Pennsylvania. But Pence said the transition is “going fantastic” and that Trump is methodically selecting his Cabinet positions, Barletta said.

Rep. Chris Collins of New York, who was appointed by the transition team as its congressional liaison, said Pence also told lawmakers one of Trump’s top priorities was taking a deep dive through President Barack Obama’s executive orders.

“We applaud that,” he said. “He will be reversing many of them.”

Pence was introduced at the meeting by Ryan, who noted that the vice president-elect was very much at home, given his House background. Ryan pointed to the chair that Pence once sat in as House Republican conference chairman, where current chairwoman Cathy McMorris Rodgers of Washington was sitting.

At one point, he emphasized that the administration wanted to work directly with rank-and-file members, as well as with Republican leaders in Congress.

“He also did say if any of us knew of any individuals that we ought to be looking at for an administration job, to please share it with us,” said Rep. Glenn Thompson of Pennsylvania.

As he ended his comments, Pence said, “Pray for the president, pray for his family, pray for our conference, and pray for the country,” according to Representative Dave Reichert of Washington. Newly elected House Republican Conference vice chairman Doug Collins of Georgia, a pastor, got up and led a prayer.

Pence was with Trump last week at the U.S. Capitol, as well, for initial meetings with Ryan and Senate Majority Leader Mitch McConnell. Later Thursday, he is to meet with House Minority Leader Nancy Pelosi and then Senate Minority Leader-elect Chuck Schumer, separately.

Pence had been selected by Trump to be his running mate, in part, to appeal to establishment and conservative Republicans, including those in Congress, many of whom he had served with there.

The Indiana governor was first elected to the House in 2000.

Pence, who left Congress at the end of 2010, was chairman from 2005 to 2006 of the Republican Study Committee, a key bloc of House conservatives. He also served as House Republican conference chairman in 2009–2010.

In 2006, he sought to become the top Republican, as minority leader, but lost to John Boehner of Ohio. Many of his former colleagues are still in the House, and Pence is seen as having close relationships with many of them.