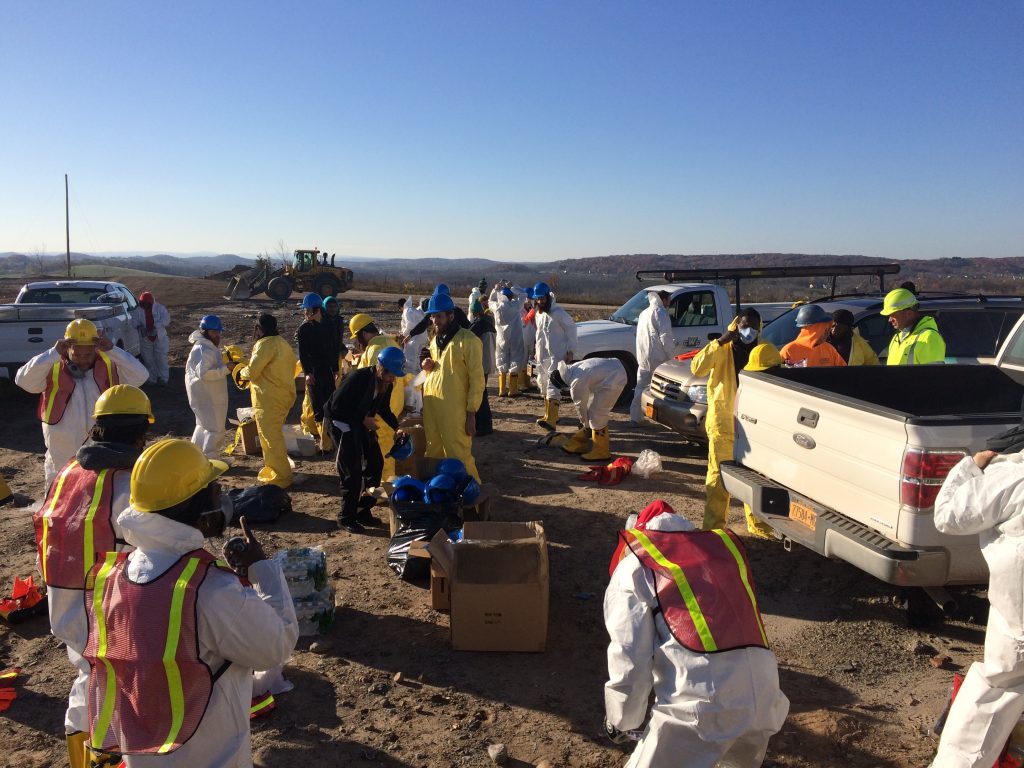 A week-long search to find a pair of tefillin that mistakenly fell into a garbage can in a Williamsburg shul ended with dashed hopes on Thursday evening, when the efforts concluded with nothing found. The attempt to find the tefillin involved a team of askanim, several city and state agencies, many generous donors and a group of dedicated volunteers that spent days scouring a landfill near Rochester, New York.

“It was very impressive how everybody pitched in,” Shmuel Mordechai Stern, an askan who worked closely with the search efforts, told Hamodia. “Waste Management offered a $1000 reward and the local mayor sent a K9 dog to help find [the tefillin] … Unfortunately, they still weren’t found.”

The incident began two weeks ago, when a man realized that the bag containing his tallis and tefillin were missing from the cubby in which they had been placed at the Satmar Beis Medrash in the Lee Gardens section of Williamsburg, Brooklyn. After unsuccessfully looking for the tefillin for two days, on Motzei Shabbos he asked the gabbai to review the shul’s security cameras in the area where the tefillin had been. The footage showed the bag tumbling out of its cubby, and into a garbage can sitting right under the cubby.

The owner of the tefillin quickly reached out to Rabbi David Neiderman, President of the United Jewish Organizations of Williamsburg and North Brooklyn, who in turn contacted Pinny Ringel, a senior liaison at the city’s Community Affairs Unit to help locate officials who might know the whereabouts of the garbage, which had been picked up from outside the shul over Shabbos.

A flurry of emails and phone calls resulted in confirmation from the city’s waste department that the garbage had already been mixed with tons of waste from around northern Brooklyn and was almost certainly packed in one of many containers to be transported to the High Acres Landfill in Fairport, N.Y., roughly five-and-a-half hours from New York City. The train carrying the garbage was not due to arrive until last Friday.

Despite the tremendous odds against him, the tefillin’s owner quickly raised a team of 25 volunteers from Williamsburg, Monroe and Kiryas Yoel, as well as upwards of $25,000 to cover the costs of protective suits and safety gear, and equipment purchase and rental, the necessary permits, and 50 professional Waste Management workers to search desperately for the tefillin.

Harav Pinchos Katz, Dayan of the Satmar shul on Williamsburg’s Throop Street, issued a letter calling on all those who were able to assist in saving the tefillin from “disgrace” and the “possibility of erasing Hashem’s name,” R”l, to do so. The letter also noted the additional Kiddush Hashem that could be made given the willing cooperation of so many Waste Management employees.

On Monday, Tuesday and Thursday of this week, the group worked at the landfill, searching tirelessly though the contents of 32 train-car loads of garbage. The containers were dumped one by one over an open area so that the waste could be carefully raked through. Waste Management assisted diligently, but when the search produced no results by sunset Thursday, it was called off for good.

“Special thanks go to the tens of community members who left their families, busy schedules and jobs, spending days far away on this unpleasant – but important – task, and to their families who allowed and encouraged them to take on this holy mission,” said Rabbi Neiderman. “You all tried, and what counts to Hashem is the efforts you made.”