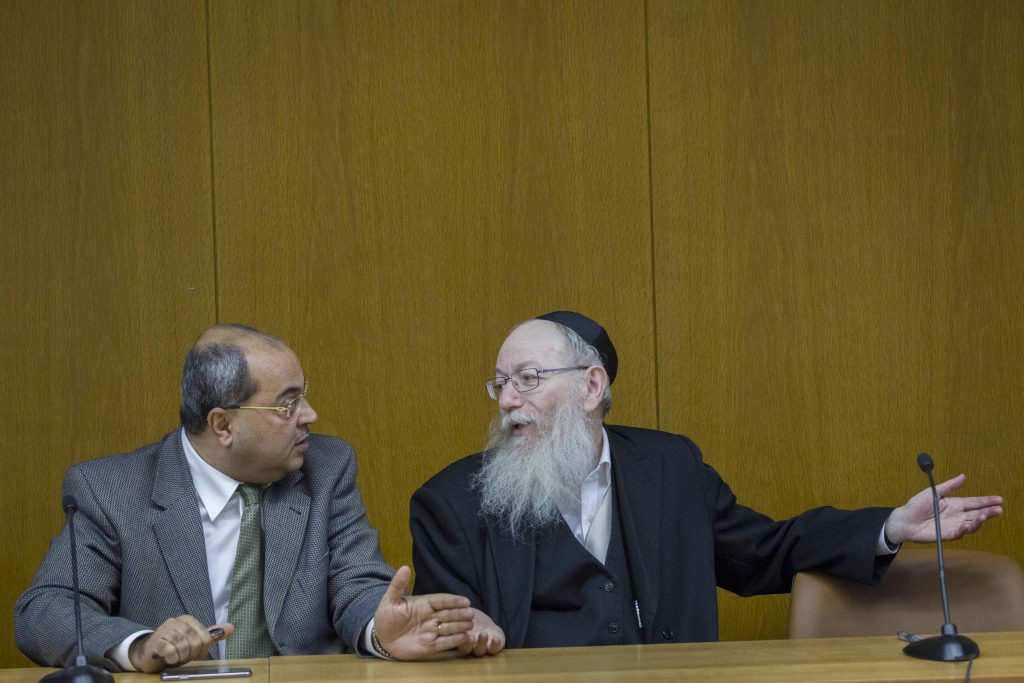 Arab MKs have cooperated with chareidi MKs on many issues of religious import, said Ahmed Tibi of the United Arab List Wednesday – so it is not surprising that it was Health Minister Rabbi Yaakov Litzman who stopped the legislation of a law that would prevent mosques from sounding the call to prayer in a manner that interferes with the peace and quiet of residents in the area. “We have helped them and they have helped us,” he told Israel Radio. “We have worked with them on issues that are important for them, like Shabbos. We see their religious issues as important and they see ours as important as well.”

Tibi added that it was very important to keep in mind the delicate religious balance in Israel. “On Yom Kippur I am stuck because I cannot drive on many roads, and I respect that,” he said. “Do not impose upon us a law that is unfair and unjust.” Responding to the fact that calls to prayer are limited to below certain decibel levels in many countries, including Iran, Tibi said that “I cannot imagine we would want to be like Iran.”

Originally set to be voted on its first reading Wednesday, the Muezzin Law – which would require mosques to severely limit the noise level emanating from them when calling people to prayer, especially for the early-morning dawn service – will not be presented, after Rabbi Litzman filed a ministerial objection to the law. In a letter accompanying his objection, Rabbi Litzman wrote that placing a limit on the religious rights of one group would violate the status quo for all groups, and by forcing changes in that status quo, it would open other groups to changes as well. Already, numerous secular groups have expressed opposition to the sirens that sound on Friday afternoon, minutes before Shabbos candle-lighting. While the sirens are usually sounded only in areas with high concentrations of chareidi and observant Jews, the sound “slips out” to other areas, and far-left MKs have threatened at times to legislate against them. Rabbi Litzman fears, among other things, that the High Court would require a law against the sirens to be legislated if the Knesset succeeds in passing the Muezzin Law.

The law, proposed by Jewish Home MK Motti Yogev, claims that the use of speakers to call Muslims to prayers at mosques is a violation of laws against excessive noise, and violates the quality of life of non-Muslims. “Hundreds of thousands of Israelis in the Galilee, Negev, Yerushalayim, Tel Aviv-Jaffa and other places in Israel suffer on a regular basis as a result of the muezzin’s call to prayers,” Yogev wrote in an introduction to the bill. “The excess noise is generated by sound systems which disturb the sleep and rest of Israelis numerous times a day, especially in the early mornings and at night.”

His proposal, wrote Yogev, “emphasizes the idea that freedom of religion does not have to harm quality of life, and recommends that the use of sound systems to call people to prayer or to send out other messages be banned.” After the objection was filed, the Ministerial Law Committee will have to review it again in order for the Knesset to vote on it.

Joining the objective Tuesday night was Interior Minister Rabbi Aryeh Deri, who was opposed to the legislation in the first place. Rabbi Deri said that laws already on the books were sufficient to limit the noise from mosques, especially the early-morning calls that were the real issue for most people. The current laws were not being enforced, said Rabbi Deri, and if they were, there would be no need for a new law.

Tibi also backed away from a call for a “civil rebellion” over the Muezzin Law that he had made in an interview with Arab media. Tibi said that his rebellion idea was limited to the Muezzin Law. “Netanyahu wants to turn the political dispute into a religious one and this could set off the entire region,” Tibi said. “There will not be a situation in which the muezzin’s call will not be heard. Perhaps he supports this law because he can hear the call in his villa in Caesarea when it is sounded in Jisr a-Zarka [north of Caesarea], but he cannot be allowed to drive everyone crazy because of his personal preferences.”

Earlier, Tibi called for a “civil rebellion” over the law. “This is an unworthy law and I call on the public to refuse to honor or observe it,” he said in an interview in Arab media. “Prime Minister Binyamin Netanyahu himself stands behind this law and he is the chief spreader of Islamophobia and incitement against Muslims.”

Muslims have been up in arms over the law, and in a Knesset discussion Monday night, several got up and began ululating the call to prayer in the Knesset in protest over the law – causing a near-riot in the chamber. In a statement, PA chief Mahmoud Abbas said that approving the law for legislation was “an extremely serious one that will bring tragedy to the region. These laws are unacceptable, and we will refer our complaints to international institutions,” including the U.N. Security Council. Top PA cleric Yussuf Adais said that forcing mosques to give up loudspeakers “is racist and will bring upon us a religious war.”

Adnan Al-Husseini, the PA’s Governor of the Yerushalayim region, said that the matter was also political. “The muezzin’s call to prayer is a symbol of the Palestinian presence in Yerushalayim, and they are trying to erase this.” In its own statement, Hamas said that the law was “a dangerous development and another attempt to change the status of Yerushalayim, and to erase its Islamic identity. It is forbidden to interfere with religious ceremonies. This is a move that will jar the feelings of all Muslims.”