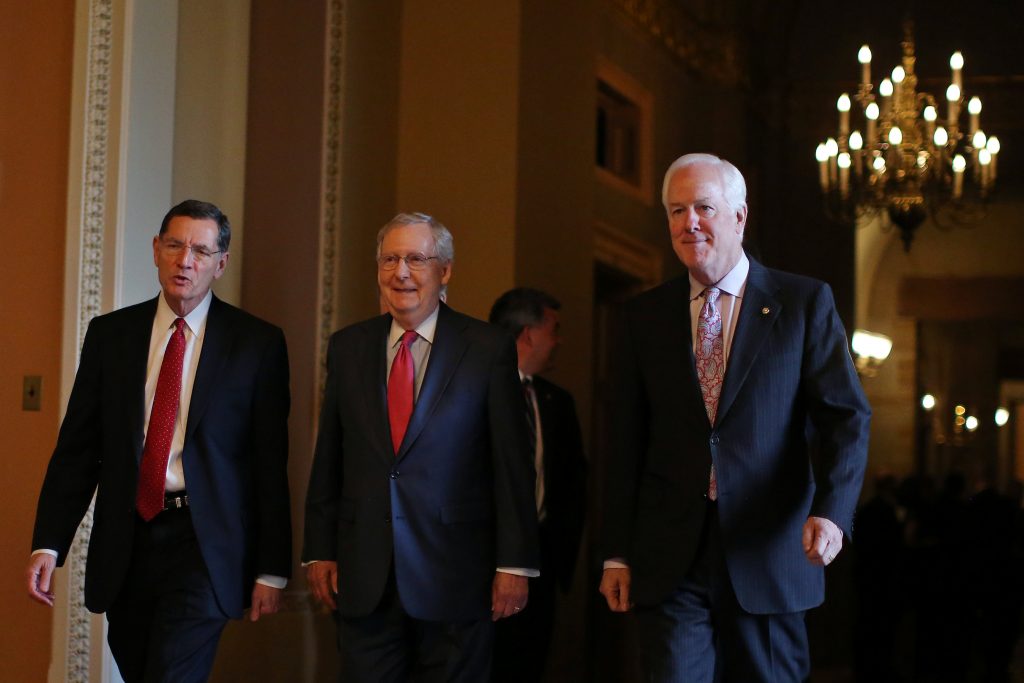 Senate Republicans re-elected Mitch McConnell on Wednesday to be majority leader next year, while Democrats picked Chuck Schumer to lead them, setting the chief actors as the chamber prepares to push an agenda that will be dominated by Donald Trump and the GOP.

McConnell, 74, is a discreet but deadly master of the Senate’s legislative chess game. His role will be to steer GOP bills to the desk of a president whose name he barely spoke during a tumultuous campaign in which many Republicans viewed Trump and his incendiary comments on Muslims, veterans and others as political poison.

“It’s time to accept the results of the election, to lower the tone and to see what we can do together to make progress for the country,” McConnell, from Kentucky, told reporters Wednesday.

As Senate minority leader, Schumer will assume his weakened party’s most powerful remaining post as it struggles to define its role in a Republican-dominated government.

The New Yorker’s ascension from his No. 3 spot has been a virtual lock since last year, when he quickly nailed down votes for the top job after current Minority Leader Harry Reid (D-Nev.), announced he’d retire. Other than Schumer, most of each party’s leaders will remain in their posts next year, an ironic stability following an election that seemed to show a demand by voters for change.

McConnell and Schumer faced no opposition at separate closed-door meetings.

Republicans will control the White House, House and Senate but their potential Achilles’ heel is the Senate, which they will dominate 52-48. Assuming Republicans don’t eliminate the rule allowing filibusters, Schumer should be able to keep the GOP from the 60 votes they’d need on some issues to break the procedural delays, potential leverage for bargains.

“Where we can work together we will,” Schumer told reporters about Trump, with whom he shares an affection for soundbites and sharp elbows. But Schumer said he’s also told the president-elect, “On issues where we disagree, you can expect a strong and tough fight.”

Schumer has mentioned infrastructure as an area of possible cooperation.

Many Democrats will feel pressure to back Republicans on other issues, too. Twenty-five of the 33 Senate seats up for 2018 re-election are held by Democrats and their two allied independents, including several from deeply Republican states like Montana and West Virginia, and they’ll have to find ways to appeal to constituents.

Underscoring Democrats’ effort to understand why last week’s election turned so sourly against them, Schumer announced a broad, 10-member leadership team. It ranged from liberals like Sen. Elizabeth Warren of Massachusetts to moderates like West Virginia’s Joe Manchin.

“We need to be a party that speaks to and works on behalf of all Americans,” Schumer said.

Schumer, 65, vaulted over No. 2 Senate Democratic leader Dick Durbin of Illinois, who will remain in that slot. He’s been a savvy partisan combatant willing to strike compromises, such as on a 2013 bipartisan immigration overhaul that eventually died.

McConnell has proven to be a coolly effective leader, steering his party through a long battle over a Supreme Court vacancy and Trump’s stormy presidential candidacy. McConnell distanced himself from Trump during the campaign, at times flatly refusing to discuss the race with reporters.

McConnell was Senate minority leader for eight years before becoming majority leader when the GOP took control in 2015.

Illustrating a GOP openness toward Trump, Sen. Deb Fischer (R-Neb.) said, “Mr. Trump is ready to get to work and we’re there with him.” Fischer initially called on Trump to end his candidacy and then reversed herself.

In the House, Speaker Paul Ryan (R-Wis.) is on track to keep his job in January after Republicans there endorsed him Wednesday by voice vote.

In a letter seeking support, Pelosi told fellow Democrats they must be “a strong voice for hard-working families” and “unified, strategic and unwavering.” She said she is already backed by two-thirds of Democrats — more than enough to win.