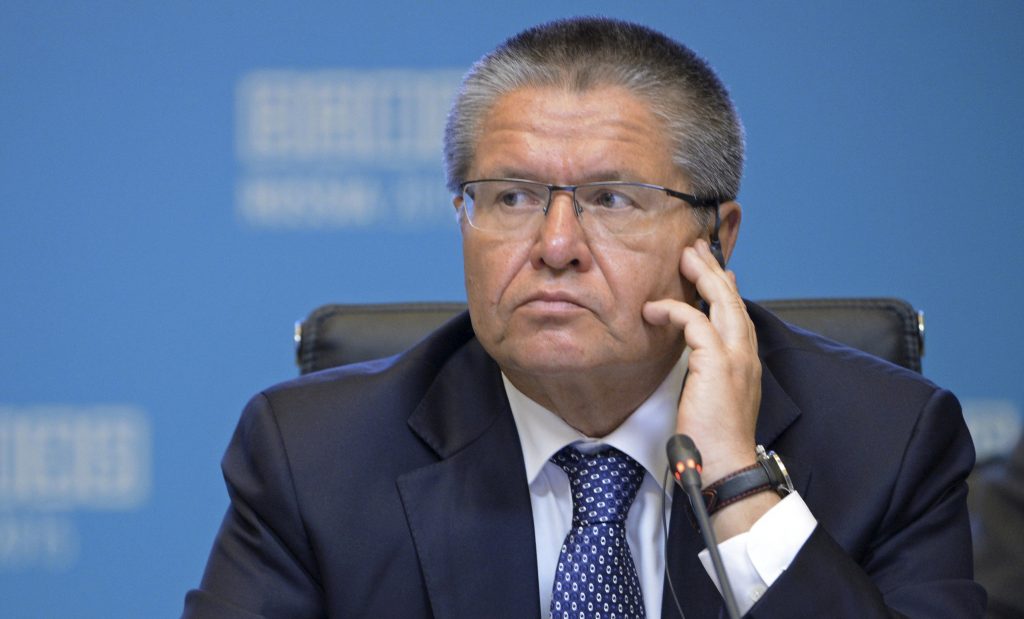 A high-profile corruption case shook Russia’s establishment and appeared to shed light on rifts within President Vladimir Putin’s inner circle on Tuesday, after authorities detained the country’s economic development minister on suspicion he took a $2 million bribe over a controversial privatization deal.

Alexei Ulyukayev became the highest-ranking official to be charged with corruption during Putin’s tenure as Russia’s leader, and the first national minister to be arrested while in office since Joseph Stalin’s ex-security chief Lavrentii Beria was detained in the Kremlin in 1953.

Authorities said that Russia’s Federal Security Service had been listening to Ulyukayev’s phone conversations for months, and Putin’s spokesman, Dmitry Peskov, told reporters that the Russian president had been aware of the investigation all along.

“These are very serious accusations, and only a court can pass a verdict,” Peskov said, according to news agencies.

Russia’s Investigative Committee, the state agency that probes major crimes, said Ulyukayev was caught “in the act” of receiving the $2 million bribe in exchange for signing off on the $5 billion acquisition last month by the state-run oil giant Rosneft of a 50-percent stake in a smaller state-owned company, Bashneft.

The sale was reported in the Russian media to have caused dissension between rival factions in the Kremlin. Rosneft’s top official, Igor Sechin, a close Putin confidant, pushed for the right to purchase Bashneft. Prime Minister Dmitry Medvedev headed a second group that believed Bashneft should be sold to private investors, not a state-owned company.

Ulyukayev served in some of the earliest post-Soviet Russian governments, which sought to privatize state-owned companies to kick-start a transition to a market economy, a process that was marred by massive corruption among Kremlin insiders.

As a minister in Putin’s government since 2013, Ulyukayev has been overseeing a new sell-off of state assets. Initially, he opposed the Bashneft deal on the grounds that a state-owned company purchasing a state-owned company is not privatization. But he eventually signed off on the deal, which was pushed by Putin as a way to close the country’s widening budget deficit in the face of low oil prices.

Russia’s political leadership lined up to cheer the arrest as a sign that the top officials of a country long associated with official corruption can no longer operate outside the law with impunity.

“All are equal before the law,” the Interfax news agency quoted Vyacheslav Voloshin, the former head of Putin’s administration and currently the speaker of the lower house of the Russian parliament. The arrest, Voloshin said, means that there are “no untouchable people” in Russia.

Others took the case as a sign of political tension.

“For me it’s a sign of a terrible weakness at the top of the executive power, unbelievable even for me since I thought that it was weak before,” Gleb Pavlovsky, a former Putin strategist, told the Dozhd channel. Pavlovsky pointed out how odd it was that Putin apparently knew his minister was under investigation for months, but let him stay in office instead of simply firing him.

“This proves that things are very bad at the top,” he said. “Very bad.”

Others pointed to the oddities surrounding the investigation.

The Investigative Committee emphasized that while Ulyukayev had been arrested on charges of taking money to facilitate a deal, the deal itself had been completed legally and was not subject to investigation.

Another oddity: The man Ulyukayev would’ve been shaking down, evidently, was Sechin, arguably one of the most powerful people in the country, and someone who has Putin’s ear. No special investigation would have been needed for that; Sechin could have just told his boss he was being shaken down.

“One would have to be crazy to extort a bribe from the most influential person in the country,” Alexander Shokhin, who served with Ulyukayev in the Russian cabinet in the 1990s, commented. Shokhin, who currently heads Russia’s biggest business lobbying group, also pointed out how odd it was that Ulyukayev would have asked for a bribe when the company sold at market price.

“If Aleksey Ulyukaev had been charged with hitting an old babushka while driving his Mercedes G Class at high speed at night in Moscow, it woul have looked more plausible,” Shokhin told the Meduza news agency.

Many in Russia’s political ranks hold the old “reformers” like Shokhin and Ulyukayev in contempt, in line with the larger attitude in Putin’s Russia that the country was sold out to the West after the Cold War by so-called reformers who actually hated their homeland.

That sentiment pervaded the comments by lawmaker Nikolai Kovalyov, a former head of the Federal Security Service, who referred to verses Ulyukayev wrote for his son: “Go my son, go from here; On this globe you will find many places; where one step forward does not mean 500 steps back; Where they don’t say everything backward all the time.”

“I am not surprised” by the arrest, Kovalyov said. “I expected something of this kind to happen when I read his verses calling on his son to leave Russia.”