Israel A Big Hug for Rivlin in New Delhi
Israel 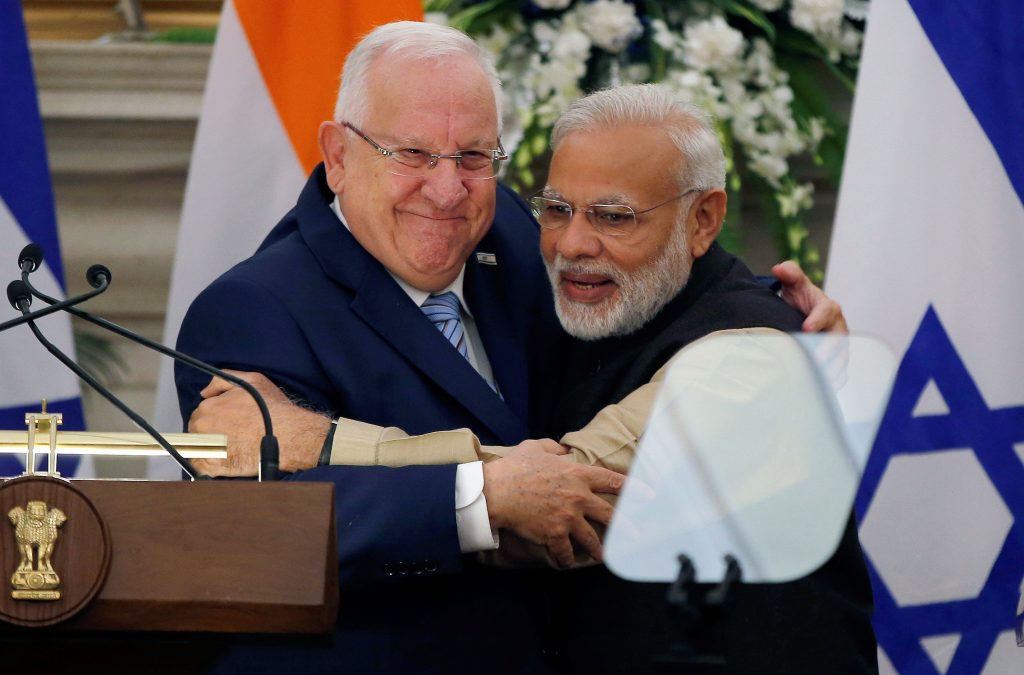 Israel’s President Reuven Rivlin received a warm welcome — including a friendly hug from India’s Prime Minister Narendra Modi — on Monday, the first day of a weeklong visit, the second-ever of an Israeli president to the world’s second most populous nation.

Rivlin’s visit marks the 25th anniversary of full diplomatic relations between the two countries, which have grown significantly since Modi took office in May 2014.

At a joint press conference in the Presidential Palace in New Delhi, Modi noted “the strength of our growing defense partnership and agreed on the need to make it more broad-based through production and manufacturing partnerships.”

The Indian leader also alluded to its decades-long conflict with adjacent Pakistan and terrorist infiltrators from across the border:

“President Rivlin and I deeply value our strong and growing partnership to secure our societies,” Modi said. “Our people are constantly threatened by forces of terrorism and extremism. We recognize that terrorism is a global challenge, knows no boundaries and has extensive links with other forms of organized crime.”

Rivlin mentioned that his visit reciprocates that of his counterpart, President Pranab Mukherjee, a year ago.

The Israeli president laid a wreath and, as is customary, sprinkled petals on the tomb of Mahatma Gandhi, who led India to independence from Britain in 1947, just a year before Britain departed Palestine and the state of Israel was established.

President Rivlin then went on to hold a working meeting with Modi, and a series of meetings with other key officials. This evening, he and Mrs. Rivlin will attend a state dinner in their honor.

During Rivlin’s visit, on which he is accompanied by a large delegation of Israeli businessman, the president will be joined by his Indian counterpart in opening an agro-tech conference in the city of Chandigarh.

Rivlin will also visit the sites of the November 2008 Mumbai terror attacks, which killed 195 people, including 162 Indians and 9 Israelis.

The president will also lay a wreath at the memorial for Indian soldiers who fell in the Middle East during World War I and meet with leaders of the local Jewish community.

Modi, in his remarks, called India’s present Jewish community “a thriving link” to its 2,000-year-old past. “Today, it is a vital part of our composite cultural mosaic that continues to thrive in their traditions. We are proud of the Jewish community in India,” he said.