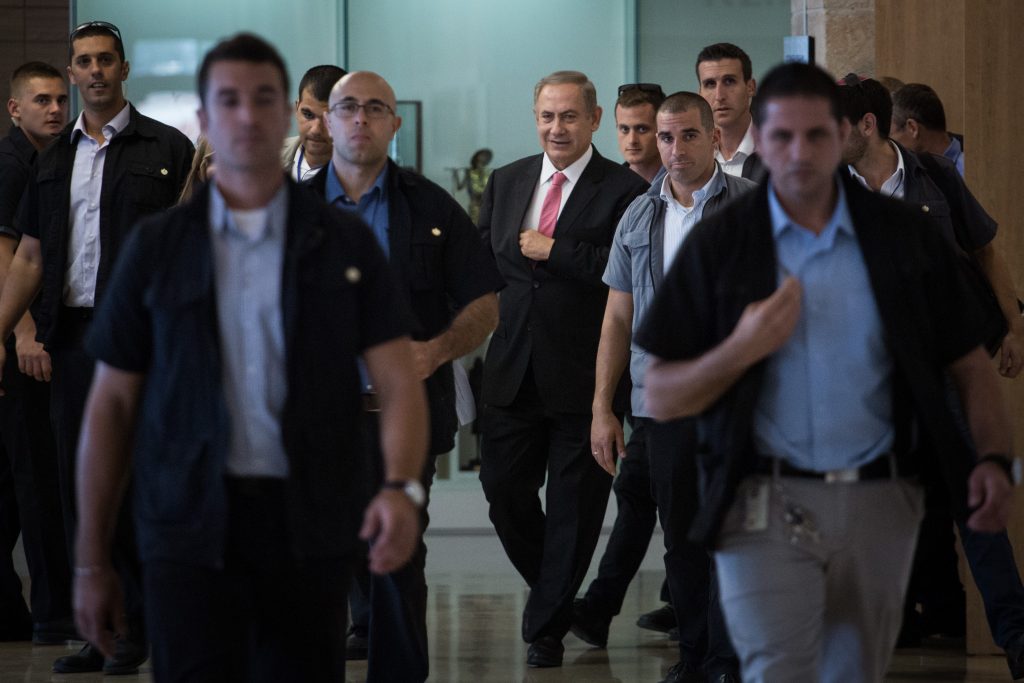 Israeli Prime Minister Binyamin Netanyahu was circumspect in his reaction to the High Court decision on Monday rejecting the state’s request for more time to solve the Amona outpost issue, saving his indignation instead for opposition leader Yitzhak Herzog, who branded the Jewish presence in Yehudah and Shomron as a “virus.”

“We are aware of the plight of the residents of Amona and are working on various ways to solve the problem,” was all Netanyahu would say at a Likud faction meeting about the issue which threatens to destroy his coalition.

High Court president Miriam Naor was blunt in stating the refusal to grant an extension on the demolition order of December 25:

“In this case, as in other cases in the past, we were asked to extend the deadline set in the ruling for the evacuation at the last minute. We can see that any time frame given, as long as it may be, would not be enough. We must be careful; otherwise deadlines set by the court will become a recommendation.

“The state’s request, which is based mostly on considerations that have already been ‘taken into consideration’ in the original ruling, constitutes in effect an attempt to change the decision made. This we cannot accept,” she wrote.

“We must also not ignore the possible repercussions of not carrying out this verdict in such circumstances. The message it would convey is that it is possible to prevent the implementation of verdicts because of the state’s concern of threats and violence, a message that cannot be accepted in a law-abiding nation.”

State attorneys argued their petition that an additional seven months were needed to formulate a solution that would settle the issue peacefully.

However, Netanyahu openly chided Herzog for his comment on Army Radio earlier in the day.

“I can’t believe Herzog would use the word ‘virus’ to describe Jews in Yehudah and Shomron. They’re part of us, part of our country. They serve in the IDF, they contribute to the country’s future and economy. Yitzhak, apologize immediately!”

“While I understand the families’ pain, they were given two years to evacuate,” Herzog said. “And look what this virus is doing to the state of Israel. Look how dangerous it is to our democracy and (look at) the fact we need to sacrifice lives over this nonsense.”

He further asserted that “this would be a serious stain on the Israeli law book, as it’s a law that legitimizes theft. It’s unheard of that a government approves a law that allows taking away the rights of private individuals. Israel is not allowed to act against the law.”

At the Likud meeting, Netanyahu also took a firm stand on the controversial muezzin law:

“The law is intended to prevent the suffering of hundreds of civilians — Jews, Christians, and especially Muslims. Our citizens are suffering. They are talking to me (about the disturbances caused by the loudspeakers), and I am certain that they are talking to you. What justification can there be for making the lives of citizens miserable? What need is there for prayers to disturb the peace so many times each day?”

Netanyahu said that he is determined to pass the muezzin law in its current firm, without watering it down.