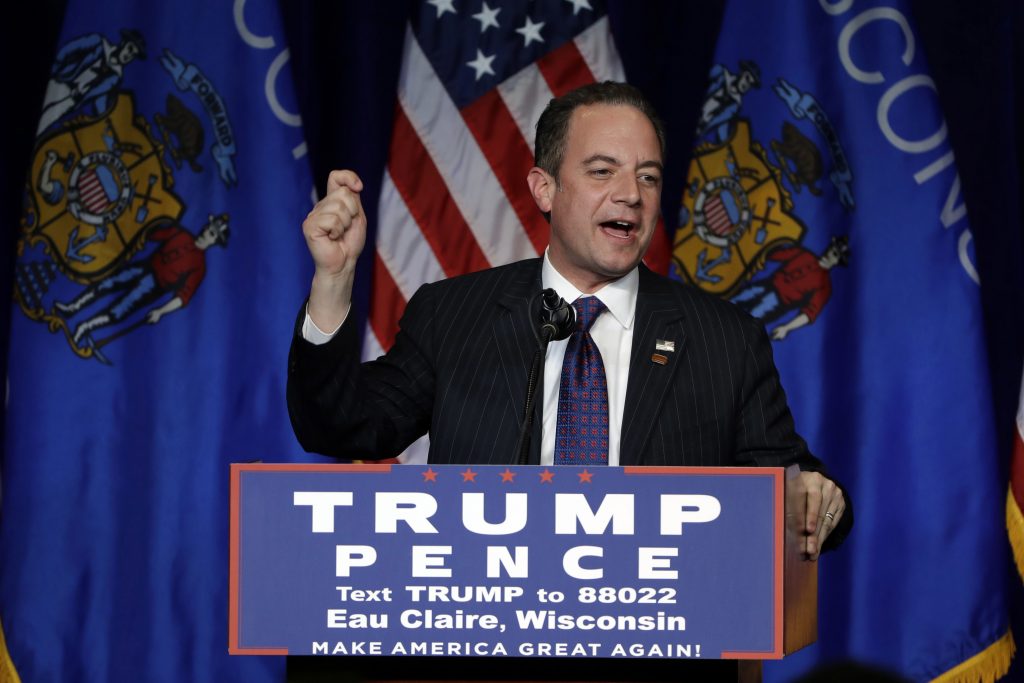 President-elect Donald Trump has chosen Republican National Committee Chairman Reince Priebus as his chief of staff, according to Trump’s campaign.

In choosing Priebus, 44, Trump has tapped a Washington insider who is viewed as broadly acceptable by vast swaths of the Republican Party. Priebus was recommended by House Speaker Paul D. Ryan, R-Wis., and will be a bridge between the White House and the Republican-led Congress, as well as the heads of Cabinet agencies.

The choice signals Trump’s willingness to work within the very establishment he assailed on the campaign trail. Priebus, a lawyer and longtime Wisconsin political operative, has been head of the RNC since 2011 and is well liked within Washington after years of forging ties with Republican leaders and lawmakers. He will undoubtedly start to smooth over residual friction from a campaign during which a number of Republicans refused to endorse Trump, reversed their endorsements or stepped away from him.

Trump had the chance to go in the opposite direction in picking his chief of staff: His antagonistic campaign chief executive and head of Brietbart News, Steve Bannon, also was said to be in the running for the job. Bannon will serve as chief strategist and senior counselor instead.

As head of Breitbart News, Bannon launched political attacks against Ryan and other Republican leaders, assailing them as weak and ineffective, during the campaign. Corey Lewandowski, Trump’s first campaign manager, also was believed to be in the running.

Priebus had a few clashes with Trump during the campaign.

But his main goal has been to unite his party. Since Trump’s victory, Priebus said, the president-elect has worked to move away from his divisive campaign rhetoric.

“Once it was determined he was going to be the winner, he started looking at and thinking about that speech,” Priebus said on Fox News of Trump’s victory speech on Tuesday. “He said, ‘We’re going to calm the waters. We’re going to bring people together. We’re not going to brag.'”

He added that Trump is a “reflective person” and that his public persona at rallies does not represent the complete man.

“The guy in private is the gracious, personable guy that I’ve gotten to know. … I think that’s part of the reason why he won,” Priebus said.

Newt Gingrich, a former House speaker who is on Trump’s transition team, said the president-elect can work with both sides of the aisle in Congress — something Priebus will no doubt help to smooth.