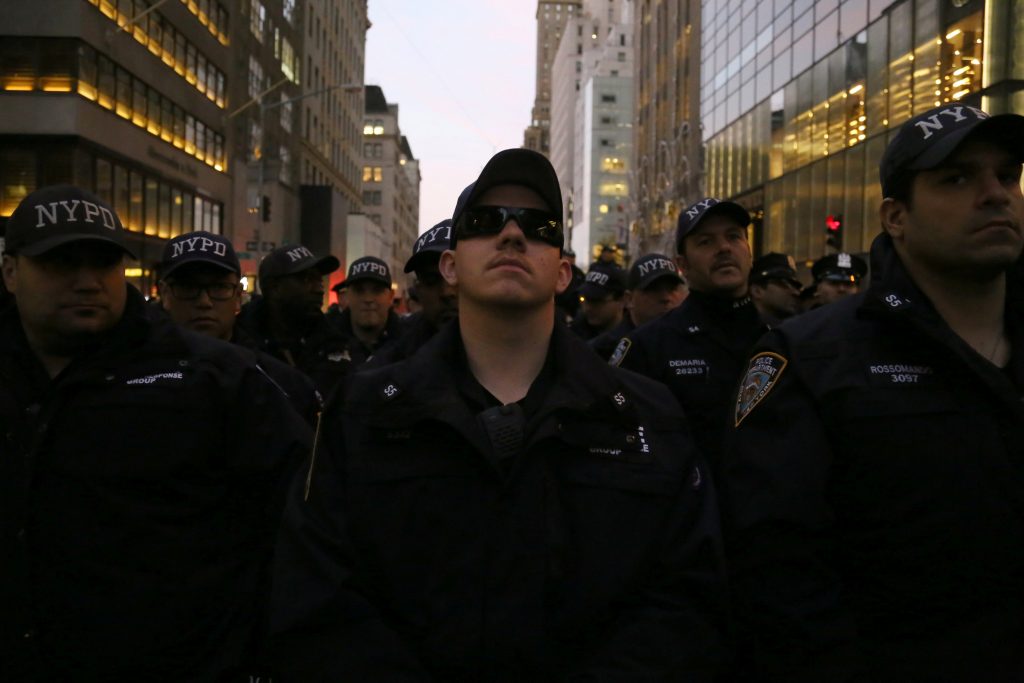 Kellyanne Conway, Donald Trump’s former campaign manager, said it was incumbent upon Hillary Clinton, President Barack Obama and other Democratic leaders to calm their supporters and encourage a peaceful transition of power after anti-Trump demonstrations have swept U.S. cities since Election Day.

“(Trump is) there for them. And he is going to be a president that listens and takes the counsel of many different people, including those from the other side of the aisle,” Conway told Chuck Todd on NBC on Sunday. “… It’s time really for President Obama and Secretary Clinton to say to these protesters, ‘This man is our president.'”

Both Clinton and Obama made speeches urging exactly that last week. In her concession speech to Trump, Clinton said: “We owe him an open mind and the chance to lead.”

In a similar vein, Obama met with Trump at the White House last Thursday and has said that his priority is to ensure a smooth transition so that Trump’s presidency is successful.

Speaking to host Chris Wallace on Fox News on Sunday, Conway also suggested that professional, paid protesters were behind the anti-Trump demonstrations in cities across the country.

Wallace had asked Conway what Trump would do to reach out to those who were scared of what his presidency would bring, then read a portion of a statement Reid issued Friday charging Trump with assuaging the fears he said his campaign stoked.

“If this is going to be a time of healing, we must first put the responsibility for healing where it belongs: at the feet of Donald Trump, … who lost the popular vote and fueled his campaign with bigotry and hate,” Reid’s statement read in part. “Winning the electoral college does not absolve Trump of the grave sins he committed against millions of Americans. Donald Trump may not possess the capacity to assuage those fears, but he owes it to this nation to try.”

Conway cited Trump’s victory speech as evidence he was “off to a great start” in unifying the country, then turned her anger on Reid.

“Talk about not wanting my children to listen to somebody,” Conway said. “I’m calling for responsibility and maturity and decency. I hope President Obama calls Harry M. Reid today and says cut it out.”

Conway also told Wallace that the Trump administration still would be one “for the forgotten man and the forgotten woman” – despite his transition-team picks being filled with Washington insiders.

Throughout his campaign, Trump played up his lack of political experience as a positive trait, saying he was an outsider who would “drain the swamp” of D.C. politics. His transition team now includes former federal bureaucrats, think-tank academics, corporate lawyers and special-interest lobbyists.

“These are people who are talented and who have done this before,” Conway told host Chris Wallace, defending Trump’s transition-team choices. “You can’t just appoint novices. You have to have people who know what they’re doing.”

Conway had previously said Trump’s pick for White House chief of staff was “imminent.” It is widely expected that Republican National Committee Chairman Reince Priebus and Trump campaign CEO Steve Bannon are on the shortlist for that position, and Trump’s choice could signal the direction of his presidency.

Conway told Wallace that both men would have “very important roles” in the administration.

“We couldn’t have done it without Preibus or Bannon,” she said, referring to winning the election.

On the issue of Obamacare, Conway also said she didn’t know if Trump would amend portions of the health care law or repeal and replace it completely – but that Trump would act quickly, perhaps even convening a special session right after the inauguration next January to address the law.

“As you know, the House and Senate under Republican control have repealed Obamacare dozens of times but they’ve never had a Republican president go the next step,” Conway said. “… that excuse has been removed and I think you’re going to see some significant action.”

A full repeal of the Affordable Care Act had been central to Trump’s campaign. Over the last week, however, Trump said he would be open to keeping portions of the law, such as making sure people with pre-existing conditions are covered and allowing children to stay on their parents’ health plans through age 26.

When Wallace asked if President Barack Obama had changed Trump’s mind about a full repeal, Conway brushed it off as Trump being polite.

“I wouldn’t take it that far,” Conway said. “I believe that President-elect Trump is being properly respectful to President Obama. This is obviously his signature domestic legislative achievement, to hear Obama say it.”