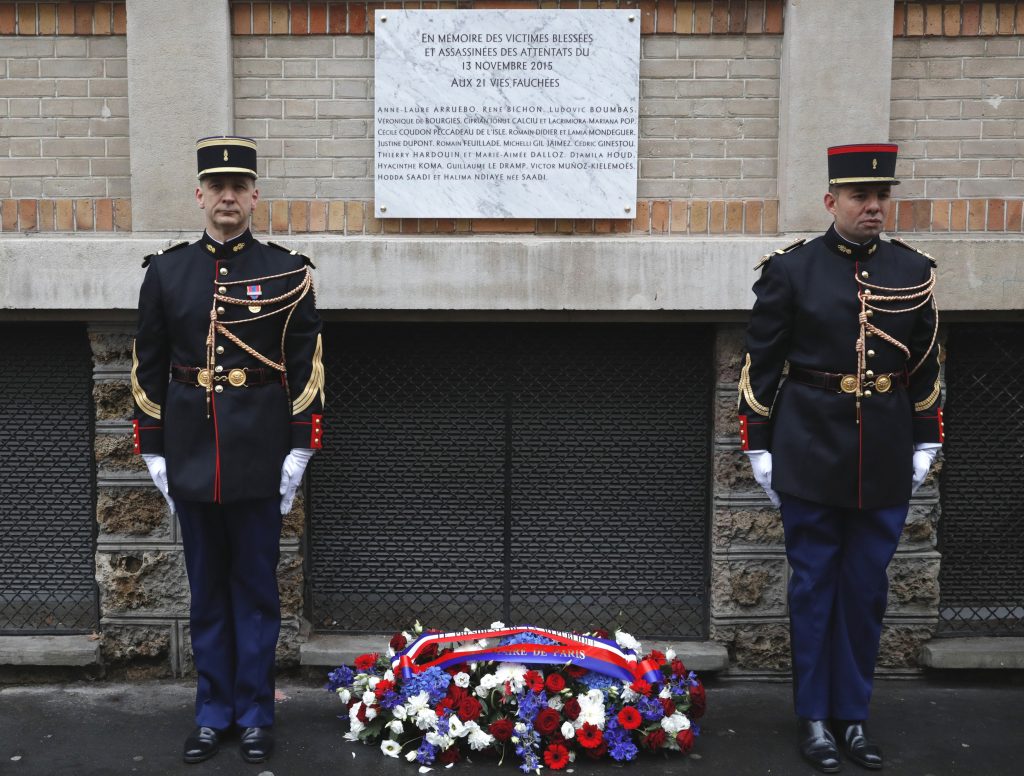 Less insouciant, more policed — France is a changed place since Islamic State terrorists killed 130 people in the country’s deadliest attacks a year ago. Fearing it’s becoming more divided, too, survivors and victims’ families marked Sunday’s anniversary of the violence by pleading for national unity instead.

Tourism is hurting, armed forces roam the streets and France is still under a state of emergency that rights groups call abusive and ineffective — and that the prime minister now says may be extended yet again.

“We always have this fear that weighs heavily in our hearts. We always try to be careful. And every time we pass by here, we think of them,” said Sabrina Nedjadi, paying respects Sunday at two cafes in her diverse eastern Paris neighborhood targeted in the attacks.

At midday, hundreds of balloons were released to honor the memories of the victims; at dusk, paper lanterns were released into the Canal Saint Martin, bearing red, white and blue lights representing the French tricolor. Onlookers, including many families with children, lined the canal and surrounding bridges, watching silently as the lanterns drifted.

Some fear that France itself is adrift, its government unable to defeat the amorphous terrorist enemy even as authorities encroach on liberties the French hold dear.

While French warplanes are targeting IS strongholds in Iraq and Syria, the state of emergency at home allows broadened police powers to search homes and monitor communications. But it could not prevent further attacks on France over the past year, including a truck rampage in Nice by a man claiming allegiance to IS. “Yes, terrorism will strike us again,” Prime Minister Manuel Valls warned this weekend

The International Federation for Human Rights warned in a recent report: “France is now in a situation where an ‘exceptional’ regime is becoming permanent, in the name of combating terrorism. But there is little evidence that this approach is working and it comes at a cost to fundamental rights.”

As silence descended Sunday on Paris for a series of commemorations, the son of the first victim of the attacks spoke out for tolerance in the face of hate.

Manuel Dias, an immigrant from Portugal, was killed by a suicide bomber outside the national stadium during an international match Nov. 13, 2015.

Under heavy security, President Francois Hollande unveiled a plaque in his memory Sunday near the Stade de France.

Dias’ son Michael said his father was “living proof that integration is possible, necessary” to end such violence.

Learning to live again after terrorists killed his father was “a personal challenge, but it concerns us all,” Dias said. “Long live tolerance, long live intelligence, long live France.”

Some people cried, others simply lit candles or laid flowers at ceremonies Sunday near the six bars and eateries where gunmen opened fire on unsuspecting crowds, enjoying an unusually mild November Friday night.

Mourners, tourists and residents streamed to the Bataclan concert hall, where 90 people were killed by three attackers who also took hostages. The concert hall reopened Saturday night with an emotional concert.

Jesse Holmes, a member of the California band whose concert that night ended in a bloodbath, paid respects at the Bataclan ceremony, placing his hand on his heart as he departed.

Nine people remain hospitalized from the attacks; others are paralyzed. Hundreds are still receiving psychological treatment.

“After this November 13th we lost part of our insouciance. The state of emergency has also contributed to set in a climate of fear,” said Daniel Psenny, a Le Monde journalist who is still recovering from a shot in the arm while trying to rescue a Bataclan victim.

But while some are moving out of his neighborhood, he refuses to cede to fear and remains proud of its diversity — a reflection of an increasingly heterogenous France.

“We must live. We are the ones who enshrine the spirit of this district, the way we live, the way we work, the way we get together. We perpetuate that. If we abandon (this area), that means terrorism has won,” he said.

The coordinated attacks were a wake-up call for France and for Europe. They followed the January 2015 newsroom massacre at the satiric newspaper Charlie Hebdo in Paris and a Kosher grocery store that left 17 dead. But the complex planning behind the Nov. 13 attacks and the high number of deaths revealed a degree of French vulnerability not previously suspected by authorities.

Neighboring Belgium, the starting point of the attacks in Paris, was hit on March 22 with attacks on its airport and a metro station that killed 32 people.

Yet a sign scrawled and posted near the Bataclan, “Love for all, hate for no one,” captures the sense of defiance shared by many.

Since the Charlie Hebdo attacks, “even if there is still worry in the minds of all French people, fear, there is a bit more love … to the reverse of what you might think, it gives us a desire to be together,” said Gregory Reibenberg, whose wife Djamila died in his arms in his cafe, La Belle Equipe, along with 18 other friends, colleagues and patrons.

“It unifies us more than the other way around,” he said. “Even if it affects us all deeply, forever.”