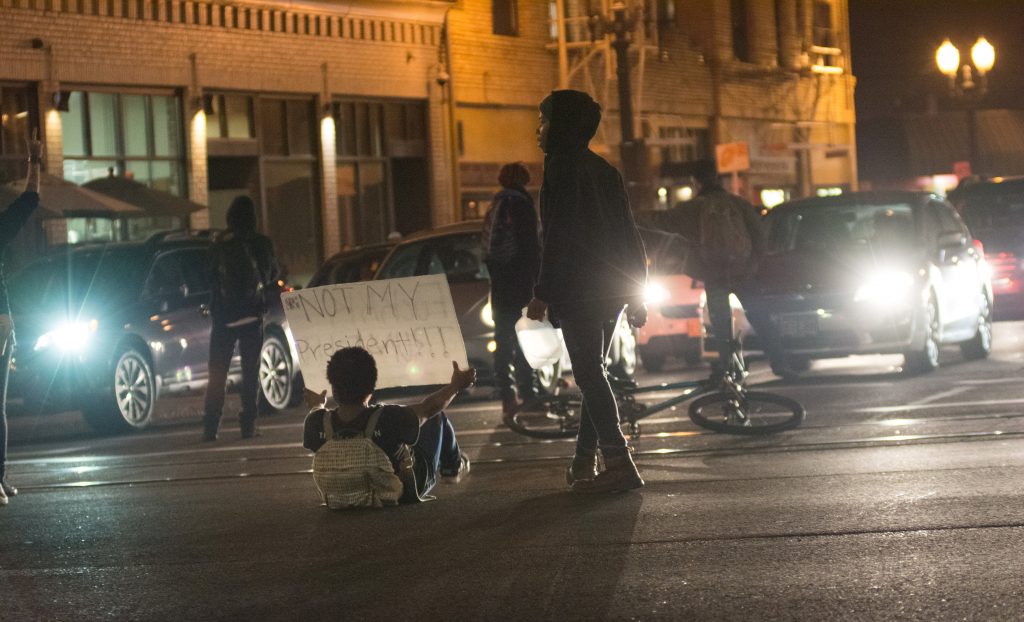 From New York to Illinois to California, in red states and blue, protesters decrying Donald Trump’s election spent another night overtaking highways, smashing store windows, igniting fires and in at least one city, facing pepper spray and rubber projectiles from police trying to clear the streets.

The demonstrations stretched into a third straight night Thursday and came to a head in Portland, Oregon, where thousands of marchers chanted, “We reject the president-elect!” while some lit firecrackers, sparked small blazes and used rocks and baseball bats to break the glass of businesses and vehicles parked at dealerships.

Officers began pushing back against the crowd that threw glass bottles and a trash can, making 26 arrests and using flash-bang devices and pepper spray to force people to disperse.

In Los Angeles, protests were largely peaceful, but 185 people were arrested, mostly for blocking streets, Officer Norma Eisenman said. An officer was injured near police headquarters, leading to one arrest, but Eisenman had no details about the circumstances or the injury. The officer was released after treatment.

The persisting protests led Trump himself to fire back, tweeting: “Just had a very open and successful presidential election. Now professional protesters, incited by the media, are protesting. Very unfair!”

His supporters also took to social media to accuse protesters of sour grapes and refusing to respect the democratic process, though there were no significant counterprotests.

In Portland, police termed the protest a riot after some 4,000 people surged into the downtown area. After giving several orders to leave, officers fired rubber baton rounds. It was not clear if anyone was hurt.

In Denver, protesters made their way onto Interstate 25, stopping traffic for about a half-hour. They also briefly shut down highways in Minneapolis and Los Angeles.

In downtown San Francisco, high-school students called out “not my president” as they marched, holding signs urging a Trump eviction and waving Mexican flags, as bystanders in the heavily Democratic city gave them high-fives.

Nearby in Oakland, a group got into some shoving matches with police and 11 people were arrested. Protesters lit street fires, smashed windows and sprayed graffiti on at least seven businesses.

In Philadelphia, protesters near City Hall held signs saying, “Not Our President” and “Make America Safe For All.” Officers on bikes blocked traffic for a march that spanned four street lanes and drew parents with children in strollers.

Jeanine Feito, 23, held a sign reading, “Not 1 more deportation.” The Temple University student said she acknowledges Trump as president-elect but does not accept it.

“I’m Cuban-American. My parents are immigrants, and I’m also a woman. These are things Trump doesn’t stand for,” Feito said. “He’s bullied us, discriminated against us, is racist and encourages violence. I think it’s important we stand together and fight against this.”

About 500 people turned out at a protest in Louisville, Kentucky, and hundreds marched in Baltimore.