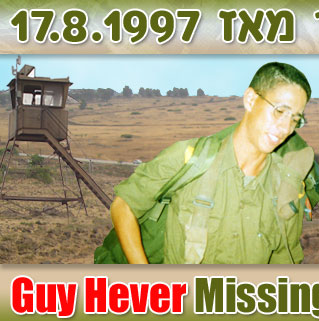 The IDF has found new evidence related to the disappearance of Guy Hever, an IDF soldier missing since 1997, Channel One reported Thursday night. According to the report, a search on the Golan Heights last week yielded parts of his uniform, as well as the boots he was wearing when he went missing. Several other “biological indicators” were found that are likely to be identified with Hever as well. The items are being analyzed by the National Forensic Institute, the report said.

In a statement, the IDF said that the latest round of searches for the missing soldiers had been completed. “The searches we conduct on the Golan Heights are among numerous activities undertaken by the IDF to shed light on the mystery of the disappearance of Guy Hever, and part of the ongoing efforts to find the soldier.”

The search involved special IDF scuba diving units who explored pits, wells and lakes on the Golan Heights where Hever is thought to have disappeared.

Hever, who was born in 1977, joined the IDF in 1995, and went missing on August 17, 1997. He was last seen on the Golan Heights, and speculation on his fate has run the gamut from a kidnapping by Syrians or a terrorist group, to a personal disaster like a drowning in one of the Golan’s many swimming holes.

So far, there has been no credible claim of kidnapping by any group, indicating that the latter is probably the case, IDF officials have said. In 2007 a Syrian terror group called The Resistance Committees for the Release of the Golan Heights claimed to be holding Hever, but the group did not offer any evidence of the by-then ten-year-old case, the first time it had made such a claim. Nevertheless, the IDF opened an intense investigation into the claim, but no new information was found.

In its statement, the army said that the new evidence in the case is being analyzed. “There is still no indication that would point the investigation into specific directions. The IDF is in constant contact with the Hever family and will continue to search for him. The IDF continues to search for all missing and captive soldiers. The IDF has a moral obligation to return all soldiers to their families.”