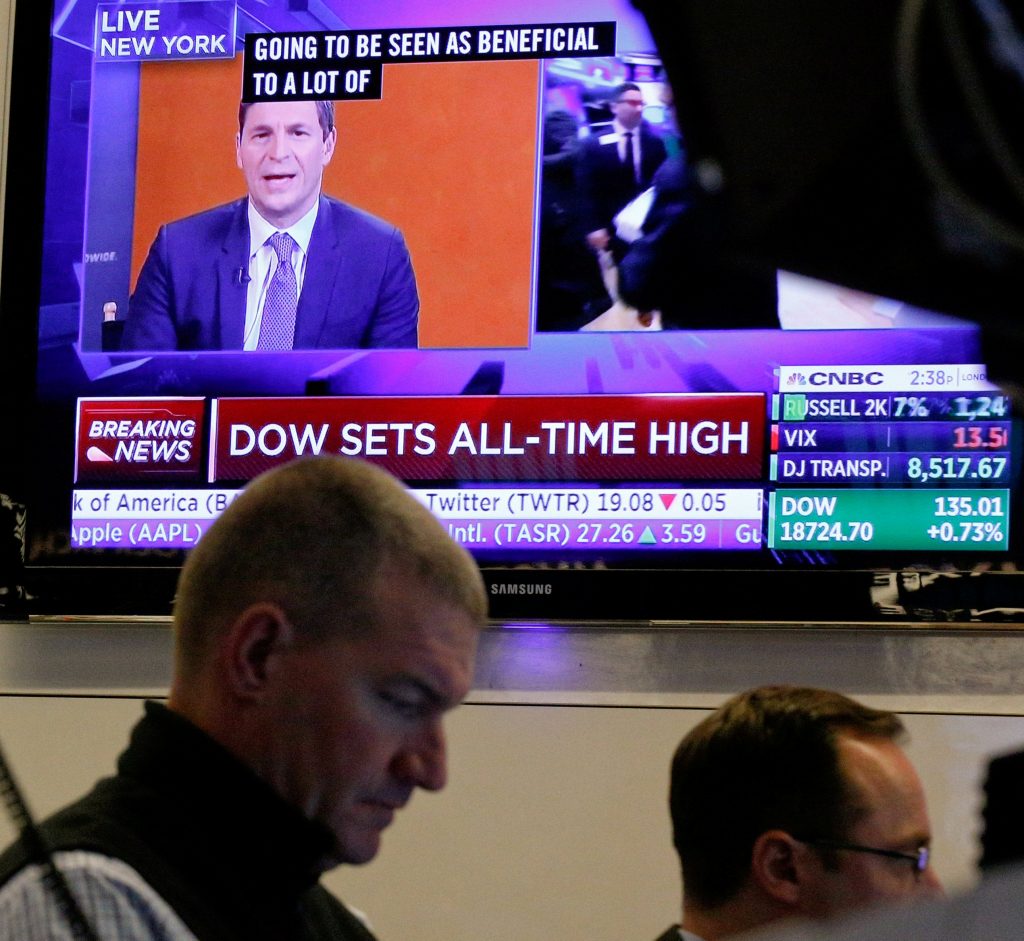 Banks and other financial companies led U.S. stocks mostly higher in afternoon trading Thursday, nudging the Dow Jones Industrial Average on course to beat its all-time closing from August. Consumer-focused companies, utilities and technology stocks were among the biggest decliners. The market was coming off a big rally following the election of Donald Trump as the next U.S. president.

TRUMP BOUNCE: The upcoming Trump presidency, which will commence on Jan. 20, triggered a strong rally on Wednesday that extended somewhat into trading Thursday. Traders were focusing on Trump’s promises to boost U.S. economic growth through infrastructure spending and by cutting red tape, rather than uncertainties such as what he might do with trade agreements. Before the election, markets had been worried about a Trump presidency because his campaign promises carried few policy details, making him an unknown quantity compared with rival Hillary Clinton.

THE QUOTE: “We had a gangbuster day yesterday; call it a Trump rally,” said Doug Cote, chief market strategist for Voya Investment Management. “Today we’re having a little breather, a little rest, but the key thing that will also keep the market going is the S&P 500 corporate earnings for the third quarter are positive for the first time in six quarters.”

BETTER QUARTER: Macy’s rose 6.9 percent after the department store chain raised its sale outlook for the year, citing improved business in the third quarter. The stock gained $2.65 to $41.04.

BONDS: The sell-off in bonds continued, sending bond prices lower and kicking up the yield on the 10-year Treasury note to 2.10 percent from 2.06 percent late Wednesday. That yield is a benchmark used to set interest rates on many kinds of loans including home mortgages. Traders have been selling bonds more aggressively to hedge against the possibility that interest rates, which have been ultra-low for years, could rise steadily again under Trump’s administration.

MARKETS OVERSEAS: The major stock indexes in Europe turned lower after an early rally. Germany’s DAX was down 0.1 percent, while the CAC-40 in France was off 0.3 percent higher. Britain’s FTSE 100 was down 1.2 percent. Optimism that Trump’s election will improve U.S.-Russia relations helped lift the Micex index in Moscow 0.9 percent.

In Asia, shares posted hefty gains as they responded to the optimism recorded in Europe and the U.S. the day before. Japan’s benchmark Nikkei 225 index was the standout performer, rocketing 6.7 percent after sliding more than 5 percent the day before. South Korea’s Kospi advanced 2.3 percent and Hong Kong’s Hang Seng added 1.9 percent. Australia’s S&P/ASX 200 surged 3.3 percent.

CURRENCIES: The dollar has been fairly solid since Trump’s victory. The U.S. currency rose to 106.66 yen from 105.84 yen on Wednesday. The euro was down to $1.0892 from $1.0930. The Mexican peso continued to weaken against the dollar. One dollar now buys 20.50 pesos, more than the 19.87 pesos it bought late Wednesday. Investors worry that Trump’s anti-immigration stance and intention to repeal a trade pact with Mexico could hurt that country’s economy.