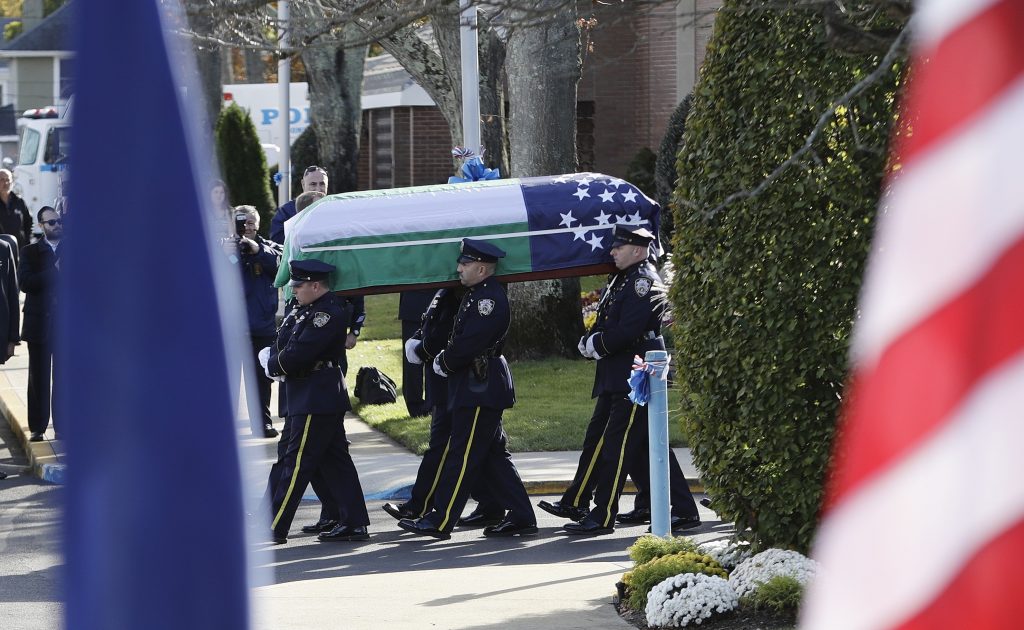 Thousands of police officers from across the nation paid tribute Thursday to a New York City police sergeant who was killed during a gunfight last week.

Throngs of officers stood shoulder-to-shoulder for nearly a mile as the hearse carrying the body Sgt. Paul Tuozzolo arrived for his Long Island funeral. The 19-year veteran officer was killed last Friday in the Bronx.

“Paul was everything we could wish for in a police officer,” Police Commissioner James O’Neill told mourners. “Paul protected all New Yorkers and he died while keeping people safe.”

Tuozzolo’s family, and his work as a police officer, were his two passions, said the commissioner.

“He took these two passions with him wherever he went. On patrol, or while grabbing coffee at a nearby gas station, he talked all the time about Lisa and their two small boys, just 3 and 4 years old now.

During his eulogy, his voice cracking, O’Neill posthumously promoted Tuozzolo to Sergeant-Special Assignment.

De Blasio said Tuozzolo was a hero who “gave his life protecting his fellow officers, protecting all of us. He laid down his life for his friends.”

Sergeants Benevolent Association President Ed Mullins said Tuozzolo was a “warrior” who lived for his job and his family. The 41-year-old officer would have been eligible to retire next year. He was the fifth New York City police officer to be fatally shot in the line of duty in the last two years.

“The memory of Paul will be a part of this department forever and ever and ever,” said police chaplain Monsignor Robert Romano.

Blue ribbons were tied to trees and lampposts near the St. Rose of Lima Church in Massapequa; businesses hung signs and photos of Tuozzolo with messages of condolences for his family. A police helicopter hovered over the church as snipers stood watch on nearby rooftops.

The encounter that took Tuozzolo’s life unfolded after the gunman, Manuel Rosales, had broken into his estranged wife’s home. Rosales, of Brentwood, stayed for hours before fleeing. He also was killed in the gunfire.

Tuozzolo’s partner, Emmanuel Kwo, was treated at a hospital for a leg wound. Mullins said Kwo told him that his partner “saved my life” and shouted “gun, gun, gun!” before Rosales opened fire.

Authorities say Rosales had a history of 17 arrests and served time in state prison for possession of stolen property. Suffolk County Police Commissioner Tim Sini said Rosales was bailed out of jail after his last arrest, in July, on a domestic violence charge. He said his officers have “taken a hard look” at Rosales’s arrest history as part of the investigation.