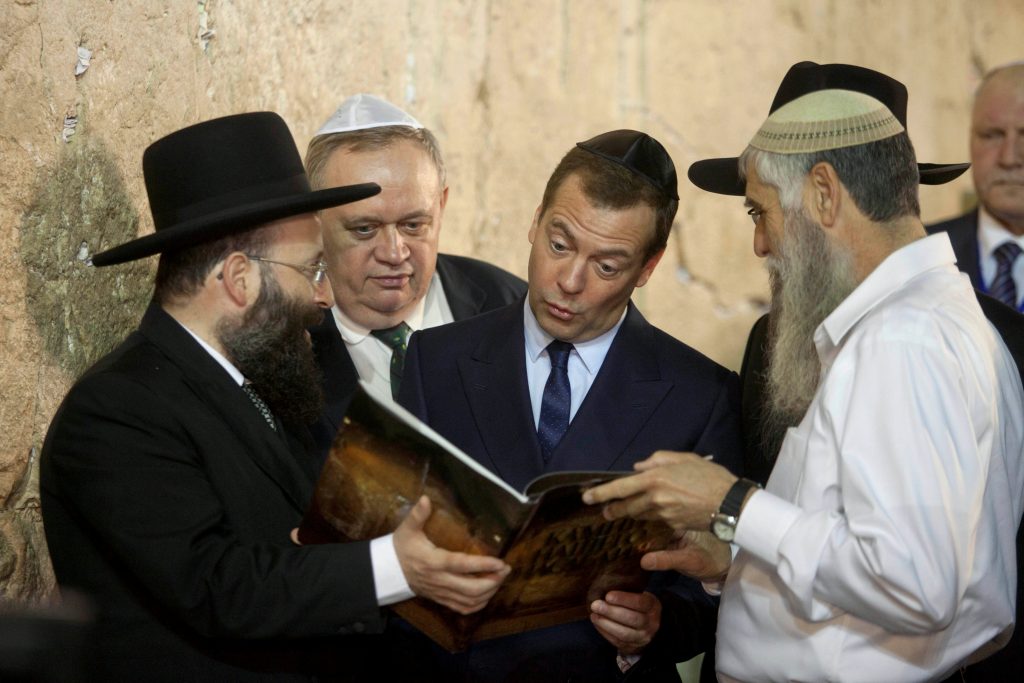 On the first day of a three-day trip to Israel, Russian Prime Minister Dmitry Medvedev went to the Kosel Thursday morning, where he reiterated that Russia recognizes the Jewish connection to the holy site, and said that the recent UNESCO vote denying that connection was unimportant.

Medvedev was hosted by Rabbi Shmuel Rabinovitch, the Rav of the Kosel, and was accompanied by Russia’s Chief Rabbi Berel Lazar.

Rabbi Rabinovitch told Medvedev that “the Jewish people’s connection the Kosel and Har HaBayis is deep and powerful in the heart of every Jew. The Jews in Russia [and all over the world] face this place when they daven.”

Medvedev was presented with a book on the Kosel tunnels, in Russian, which surveys the archeological discoveries at the site that provide irrefutable evidence of the ancient Jewish presence there.

In addition to meetings with Israeli leaders – during which he pledged to fight terrorism – the Russian prime minister is scheduled to visit the Volcani Institute to view first-hand the Israeli technology for greater agricultural productivity and higher quality, Globes reported.

He was slated to see a robotic prototype for use in spraying agricultural fields and crops in hothouses. The robot is scheduled to be introduced into the market in three to five years.

The device also detects the oil content in avocados and may be used for determining the ripeness of fruits like mango and papaya.

The Volcani scientists will show off their latest developments in the cattle sector, including sensors for monitoring the condition of a cow and the quality of its milk output, and new wheat strains and storage solutions for wheat grains.