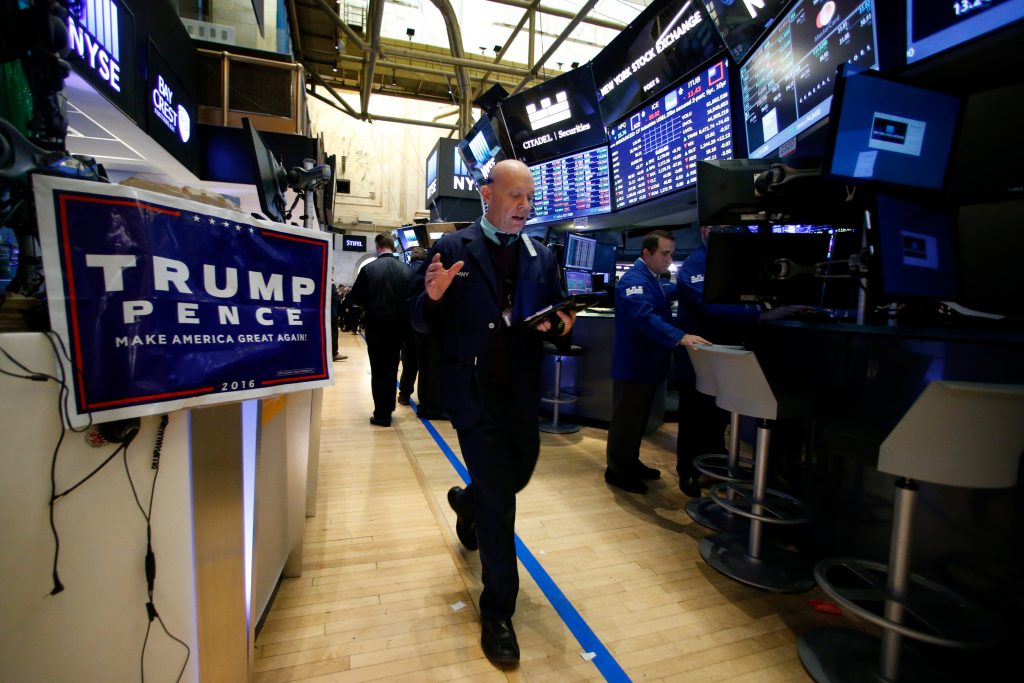 The Dow Jones Industrial Average hit a record intraday high on Thursday as investors bet that President-elect Donald Trump would lead a shift away from austerity policies.

Investors are seeing Trump’s policies such as higher defense and infrastructure spending, tax cuts and deregulation of banks and as being more business-friendly than Democrat Hillary Clinton’s position of maintaining status quo.

“The markets are adjusting to a new reality and are giving Trump the benefit of doubt,” said Adam Sarhan, chief executive officer of Sarhan Capital.

“He does have some problems with immigration and with social issues, but his economic policies, at least in the short term, are perceived to be stimulative and net good for the economy and that’s why stocks are rallying.”

The dollar jumped to a more than two-week high of 98.92, while gold turned flat as investors returned to riskier assets such as stocks.

The Mexican peso continued its downward momentum against the dollar as Trump’s policies are considered deeply negative for that country.

Financial and healthcare stocks rose, continuing to hold their positions as the top performers among the 11 major S&P 500 sectors in the post-Trump victory rally.

Consumer staples, utilities and real-estate – the defensive parts of the market – remained the big losers.

As investors decipher what a Trump presidency would mean to the financial markets, St. Louis Federal Reserve President James Bullard repeated his call that a single interest-rate increase would be adequate for the foreseeable future.

Macy’s rose 6.4 percent to $40.85 after the department store operator raised its full-year sales forecast and announced a partnership to monetize some of its real-estate assets.

Shares of drugmakers such as Merck, Celgene and Gilead rose on Trump’s victory and after California voters turned down a ballot initiative aimed at reining in rising prices for prescription drugs.

IBM provided the biggest boost to the S&P and the Dow, rising 2.7 percent to $159.02 after Bank of America Merrill Lynch upgraded the technology services provider’s stock and raised its price target.

Walt Disney and Nordstrom are expected to report earnings after market closes.