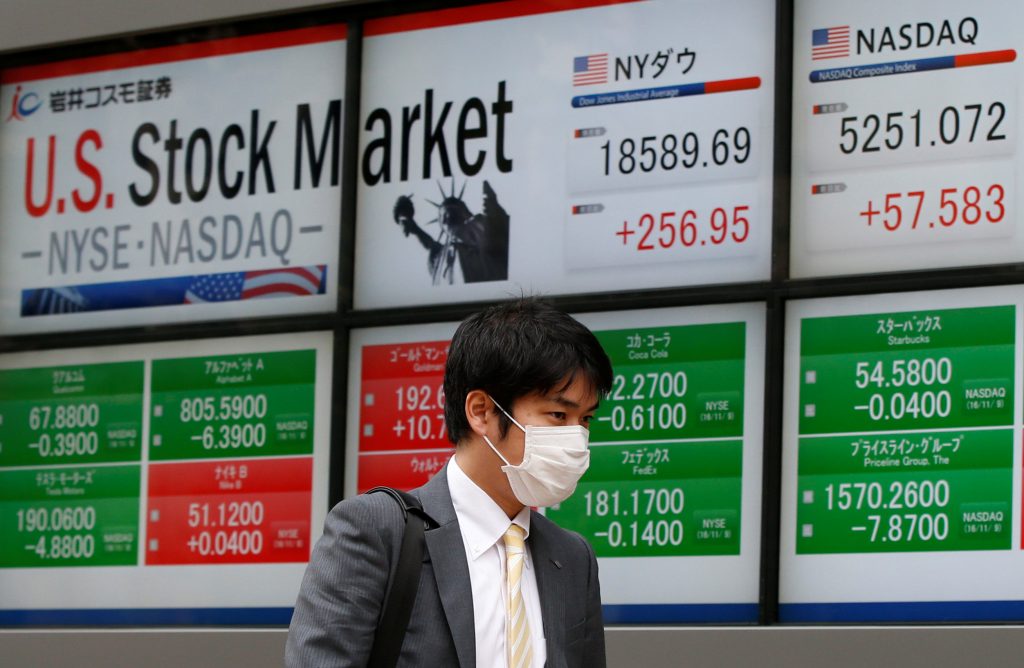 Asian stocks rallied on Thursday and the dollar firmed in a remarkable snapback from the shock of Republican Donald Trump’s presidential victory, though the speed of the reversal left some market watchers scratching their heads.

Spreadbetters expected the upsurge in equities to continue in Europe, forecasting a significantly higher open for Britain’s FTSE, Germany’s DAX and France’s CAC.

MSCI’s broadest index of Asia-Pacific shares outside Japan bounced 2 percent after slumping 2.4 percent on Wednesday as global markets plunged on signs that Trump was sweeping to power.

The Nikkei emerged even stronger, jumping 7 percent at one point after sinking 5 percent on Wednesday.

Despite the initial sharp recoil in global markets, U.S. investors opted to focus instead on Trump’s key policy priorities, which include generous tax cuts and higher infrastructure and defense spending, along with deregulation for banks.

“Investors are puzzled with their emotional investment decisions. They were risk averse yesterday, then after seeing that Americans were optimistic and chasing the market higher, they wasted no time reversing their positions,” said Takuya Takahashi, a strategist at Daiwa Securities in Tokyo.

“Some of the investors must be thinking that they shouldn’t have sold after all.”

“Markets appeared to reassess the economic outlook under Trump, towards one of higher growth and higher inflation.”

He noted that a key market barometer of 10-year inflation expectations had jumped to a 16-month peak of 1.87 percent.

Amid expectations of higher spending and inflation under Trump, yields on U.S. Treasury 10-year notes reversed an initial plunge to 1.716 percent and bolted to 2.09 percent overnight, the highest since January.

The net rise of 21 basis points was the largest daily increase since July 2013.

Helping boost the dollar, investors again revised the outlook for U.S. interest rates in the wake of Trump’s victory, with the probability of a December rate hike by the Federal Reserve going from as low as 30 percent to as high as 80 percent.

The dollar index against major currencies recovered from a trough of 95.885 plumbed on Wednesday to around 98.556.

Having stretched as high as $1.1300 in the early panic over Trump’s win, the euro then slumped all the way to $1.0906 overnight – a move of roughly four cents.

The longer-term outlook for the dollar’s weakening peers remained unclear, however.

“We expect a Trump Treasury to elevate the importance of the bilateral trade surplus with the U.S. in identifying currency manipulators and intensify pressure on trade partners to allow currencies to appreciate,” Tim Condon, a Singapore-based economist at ING, said in a report.

Meanwhile, the action was no less noteworthy on Wall Street, where the Dow jumped 1.4 percent and the S&P 500 and the Nasdaq both added 1.11 percent. Trading volume was the highest since June, when Britain voted to abandon the European Union.

The CBOE Volatility index, a gauge of investor anxiety, fell 23 percent and was on track for its biggest daily drop since late June.

Ratings agency S&P Global later affirmed the AA+ rating of the United States, but noted uncertainty over the future path of government debt would prevent any upgrade.

There were also lingering concerns about whether Trump would follow through with threatened punitive tariffs on Chinese and Mexican exports, potentially triggering a global trade war.

Among Asia’s trade-reliant economies, China and South Korea are particularly exposed to any hostile U.S. measures as they run large trade surpluses with the United States, Credit Suisse said in a research note.

Mexico’s peso trimmed losses but was still within reach of a lifetime low seen overnight.

“Trump’s protectionist policies may prove another big step back in the gradual unwinding of goods globalization that has defined the past 30 years,” wrote analysts at Nomura.

“Another important factor is that a Trump presidency would bring with it uncertainty that could undermine the Pax Americana, with all the benefits this has brought to the world in general and, perhaps, Asia in particular since 1945.”

For now, investors seemed willing to give the president-elect the benefit of the doubt, as witnessed by a broad advance in bulk commodity prices.

Copper rose to a near 16-month high on expectations that a Trump presidency could unleash a flood of infrastructure spending.

Iron ore surged 4.7 percent to its highest since January 2015.

Brent crude added to overnight gains made on the post-U.S. election surge in global markets, rising 0.3 percent to $46.50 a barrel. Partially weighed down by a rise in U.S. inventories, U.S. crude inched up 0.1 percent to $45.31.