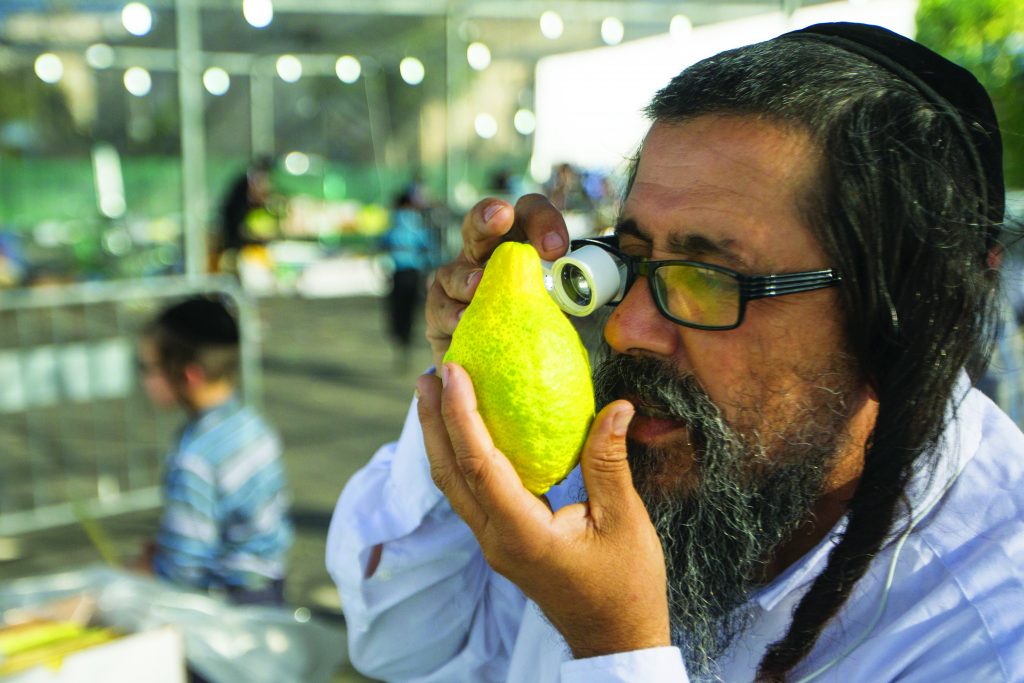 On the first day of this past Sukkos, after tens of thousands of Jews had paid princely sums for flawless specimens of a particular citrus fruit, payments were made by others, too, for a very different reason.

That day, the Smithsonian Institution’s National Museum of American History launched a public campaign to raise $300,000 in order to restore and preserve a pair of slippers, those that were worn by the main character in the 1939 production of a children’s classic.

“The shoes,” explained the Smithsonian, “are fragile and actively deteriorating.” Their color, appallingly, “has faded, and the slippers appear dull and washed-out. The coating on the sequins that give the shoes their hallmark ruby color is flaking off its gelatin base. Some threads that hold sequins in place have broken.” Something had to be done.

The campaign, which aimed at repairing the footgear and constructing a special temperature-controlled and light-controlled enclosed environment to ensure that the slippers last into perpetuity, was intended to span three weeks. By Shemini Atzeres, though, it had already exceeded its goal, and donations continue to pour in. Support came from 41 countries, with the highest concentration of donors in New York, Los Angeles and Washington, D.C. And likely the fictional town of Chelm.

To paraphrase the tefillah recited by mesaymim, “We expend funds and they expend funds.” And what an intriguing contrast the respective mass expenditures provide.

“Conserving an American Icon” is what the Smithsonian dubbed its save-our-slippers movement. “Icon” is a word borrowed from the Greek, and can mean “idol.” Whether the good-heartedly nostalgic donors to the Keren haSlippers, for their adoration of physical objects, can be categorized as idolaters is not something I am prepared to say, or qualified to judge. But such simpleminded devotion can prove something of, if an irresistible pun can be forgiven … a slippery slope.

After Yom Tov, of course, many esrogim were either consumed fresh, or processed as jelly. Others were just put aside to petrify. While the fruits were immensely valued for seven days, they had an expiration date, so to speak, one unrelated to their freshness. And that speaks to the essential difference between how a Jew looks at an esrog and how a sentimental soul sees a theatrical relic. The esrog is a means of performing a mitzvah, not an inherent object of adulation. It is valuable for the opportunity it provides to serve Hashem, a means toward a goal, not something to be venerated. And so, once its purpose as a path toward the performance of a mitzvah has been fulfilled, it reverts to a mere fruit.

To be sure, there are objects in our own world that possess inherent kedushah, like kodashim, meat or flour-offerings from korbanos brought in the Beis Hamikdash; or, today, a sefer Torah or tefillin. But kodashim is, in the end, consumed or burned, and a sefer Torah’s holiness derives from the words it contains, not from ink and parchment themselves; and when it is no longer usable, it is buried.

There are, moreover, Jews who treasure objects that were once used by great tzaddikim. But only, properly, because of the objects’ connection to those tzaddikim, who were in fact worthy of veneration because of the lives they lived. Rather different, to greatly understate things, from an artifact of a theatrical production.

Non-Jews, and Jews unfamiliar with their spiritual heritage, if aware of the prices paid by observant Jews for esrogim, must think us strange. After all, the most beautiful, symmetrical, aromatic lemon in the Trader Joe’s bin commands at most 50 cents. And it has a nice, smooth skin, too.

And if they knew of all the other substantial expenditures we make, for talmud Torah, for Shabbosos and Yamim Tovim (for Pesach alone!), for kosher meat, for tzedakah … they would surely think us entirely unhinged. They, though, don’t comprehend what a mitzvah means to a heartfelt Jew.

If only they could truly appreciate the meaning of a mitzvah, they would perceive the deep contrast between cherishing a meaningless prop and valuing a precious objet d’mitzvah. If they only, so to speak, had a bren.

This past Sukkos gave us an example of how starkly divergent are our world and the one “out there.”

A set of footwear was confirmed in the status of an icon, and a large sum was dedicated to its preservation — at least in the hopes of curators and now grown-up children — for eternity.

And a mitzvah was, as every year, performed at considerable expense by Jews, affording them actual access to eternity.