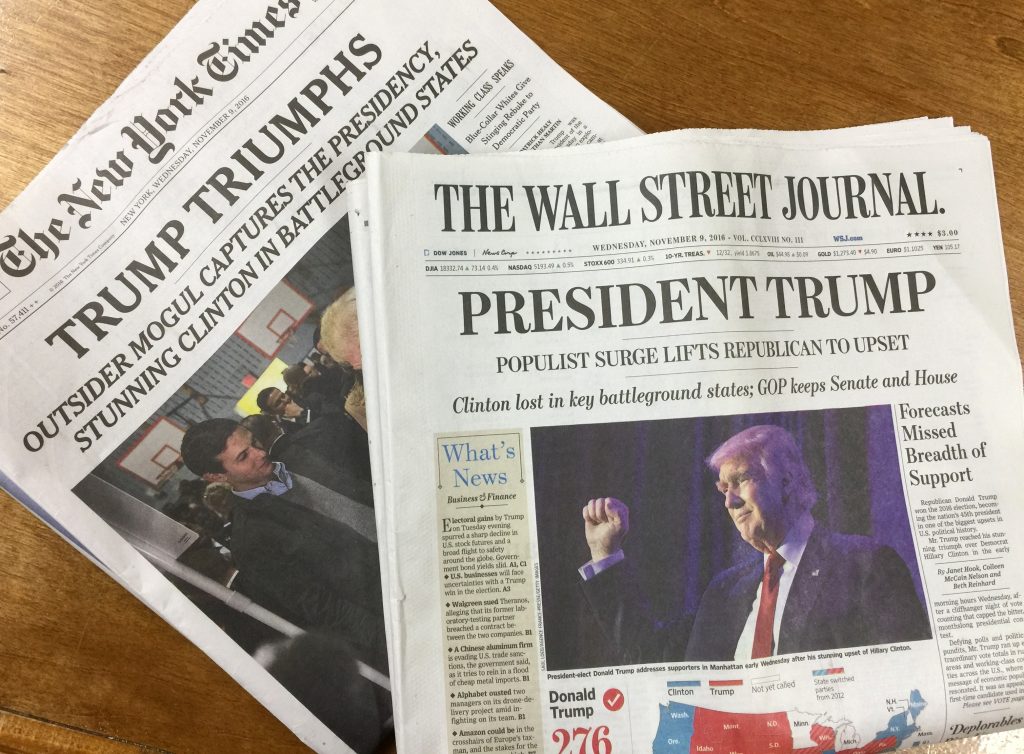 Print newspapers may be disappearing like the home telephone, but not after Election Day.

Remembering the frenzy for old-fashioned papers the morning after Barack Obama’s historic win in 2008, newspapers are printing extra copies and setting up temporary retail stands this year, regardless of whether the nation elects the first woman or a celebrity as president. The Los Angeles Times is also selling a commemorative printing-press plate of the front page.

Many people now rely on social media and apps for news, but a screenshot doesn’t have quite the same romance as a newspaper’s front page.

“We like to hold on to things that remind us of the experiences we’ve had,” like campaign buttons, or shells from a visit to the beach, said Naomi Baron, an American University professor who studies the interplay of language and technology.

A physical version of a newspaper recounting a life-altering event like 9/11 or the assassination of President John F. Kennedy is an extension of those keepsakes that a website can’t replace, she said. “Paper has a certain kind of look and feel and smell to it that digital equivalents don’t.”

Even so, after a long, sour campaign season, demand for a front page may be more muted than in 2008. Ben Redington, a 34-year-old graphic designer from Wichita, Kansas, likes buying papers after major events. But he doesn’t care for either Clinton or Trump and has no plans to buy a newspaper Wednesday. (He didn’t buy an Obama front page either.)

Newspapers were caught off-guard eight years ago when people wanted keepsake copies of the enormous photos and dramatic headlines declaring Obama the nation’s first African-American president. Bookstores, convenience stores and newsstands across the country sold out. People descended on newspapers’ headquarters in search of copies.

“They were stealing it off people’s doorsteps,” Washington Post spokeswoman Kris Coratti said. “It was crazy here.”

Many newspapers restarted printing presses to meet demand. The Post had two extra print runs and issued a thinner commemorative edition in a third.

For this year, Coratti wouldn’t say how many additional copies the Post is planning, but she said it’s similar to what the Post printed for Pope Francis’ visit in 2015. She said the newspaper is prepared for a second printing if needed, leaving plates on the presses. The Post will also sell copies online and at its offices.

The New York Times sold out in many parts of Manhattan before noon and ended up printing 225,000 extra copies, said Mark Weitzel, who manages circulation and retail sales for the Times. That is more than double a typical day’s sales at newsstands, coffee shops, convenience stores and other street sales.

This year, he’s ready for a run on a Wednesday paper with a photo of a President Donald Trump or Hillary Clinton, both of whom are New Yorkers. The Times plans to print at least 225,000 extra copies and will sell papers outside its headquarters (though because newsstand sales have declined since 2008, the paper is sending out fewer papers overall).

Elsewhere, The Seattle Times is doubling the number of papers available at stores and coin boxes. The Los Angeles Times will send out more than triple the average number of papers and put a kiosk in front of its building. The Plain Dealer of Cleveland is tripling how many newspapers it sends to stores, to about 100,000, and will have another 10,000 to 15,000 on standby at the plant if needed.