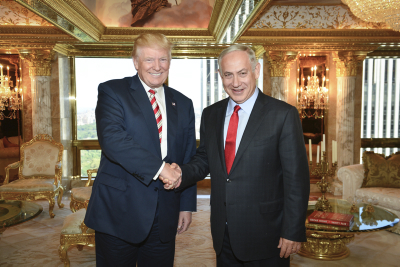 Prime Minister Binyamin Netanyahu on Wednesday afternoon offered his congratulations to Donald Trump on his election victory. “The President-elect is a true friend of Israel,” Netanyahu said.

“We will work together with the United States in our strong and stable relationship with the U.S. based on our shared interests, values and destinies. I am positive that President-elect Trump and I will continue to strengthen the special relations between Israel and the United States, and bring it to new heights,” said Netanyahu, who has had a rocky relationship with outgoing President Barack Obama.

In his own statement, Finance Minister Moshe Kachlon said that Israel “appreciates the strong relationship with the American people, and the support that the United States provides the state. Our positive relations have crossed the lines of parties and factions. We expect to continue to work in a positive manner with the new administration to strengthen the security and economic relations between our two countries.”

Also offering his congratulations was Knesset speaker Yuli Edelstein, who stressed that relations between Israel and the United States “are strong and warm, and I am positive they will remain so in the new era. I wish the American people the strength to stand united in the face of the challenges they face. Your success, Mr. Trump, will be our success.”