OPINION: We Can’t Expect Politicians to Behave Any Better Than Us 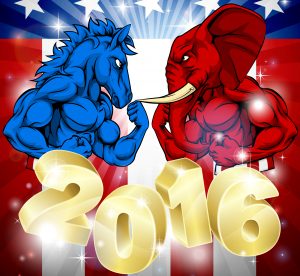 People ask me who I intend to vote for. “Hillary,” I tell them, “and then I’m going to go home and throw up.”

I mention this because the nature of our current presidential election is so starkly at odds with anything that at age 67 I’ve experienced. I know gobs of people eager to cast their ballot Tuesday. Few will be voting out of affinity, let alone love.

How did we get to this point, where so many of us are voting not for, but against?

A Nov. 1–3 Fox News poll of likely voters found that 56 percent view Democratic presidential candidate Clinton unfavorably, while 55 percent feel the same about GOP nominee Donald Trump. These are striking numbers to those of us raised to believe that our preferred candidate, at least, should embody what we see as the best of America.

Instead, we are left with Clinton, who seems drawn to operating at the precipice of political morality, and Trump, the Ugly American.

Yes, I know I’m being naive. Over the course of our 224-year presidential history, we’ve endured our share of inept, under-qualified, possibly corrupt chief executives. While in Washington recently, my wife and I visited the Smithsonian’s National Portrait Gallery, which includes a formal portrait of every U.S. president, accompanied by a synopsis of each chief executive’s strengths and weaknesses, his triumphs and defeats. The number remembered primarily for their faults is unnerving.

Consider, for example, Ulysses S. Grant, the 18th president, who served from 1869 to 1877: “His weak control over his administration spawned an outbreak of federal corruption that made ‘Grantism’ synonymous with public graft.”

It’s important to remember, though, that however poorly Grant, and others such as John Tyler and Franklin Pierce, came to be judged while in office, as candidates they were generally admired — at least by their supporters. Warren G. Harding, the 29th president, whose 1921–23 stewardship was tarnished by scandal, won in a landslide, capturing 60 percent of the popular vote.

I emailed H.W. Brands, the eminent presidential historian and University of Texas at Austin professor who has written on Grant, Harry S. Truman, Ronald Reagan, Woodrow Wilson, Andrew Jackson, and both Theodore and Franklin Delano Roosevelt, to ask if there has ever been another presidential election like our current one, in which both aspirants have been viewed so negatively.

“I can’t think of a prior election with such high unfavorables,” Brands replied, “but for most of American history nobody asked that question. And we have become a more negative culture than we used to be. So I think it says more about us than about the candidates.”

He’s right. My wife and I had considered inviting a close friend and Trump supporter/ Hillary hater to dinner the night of the first presidential debate. We decided against it. The evening would have been too contentious, in a way that it never was for the three of us when George W. Bush debated Al Gore and later John Kerry, or when Barack Obama debated John McCain and then Mitt Romney. In fact, for the sake of our friendship, political discussion between us has been off the table for months.

But that’s not how it should be with friends — or among any people of good will struggling to identify the best person in whom to entrust the future of our country. Part of it, I think, is that it’s so much easier in today’s world to closet ourselves within our silos of narrow self-interest. I don’t know anyone who tunes to Rush Limbaugh in the afternoon and Rachel Maddow at night. If we never seek out other voices, never acknowledge that there is another side, how can we find those shared points of interest around which we can achieve compromise? Which leads to this:

Why should we expect our politicians to be any different than us?

I confess I’m as guilty as any. I have a second conservative buddy, a retired San Diego physician and anyone-but-Hillary supporter, who was as eager to engage me as I was of him.

“I view (the election) this way,” he wrote in an email. “Electing Trump would be like playing Russian roulette with a six-shot revolver, where one, or perhaps two of the chambers have bullets in them. Electing Hillary is playing it with a double-barreled shotgun, with live shells in both chambers.”

We exchanged 10 emails over a period of days, he spreading vinegar about Clinton, me pouring oil over Trump. And then I begged that we stop. Neither of us had gained or given an inch. I was exhausted.

In the end, we found between us one depressing commonality.

“I too will go home and throw up after voting,” he wrote, ending our personal presidential debate.