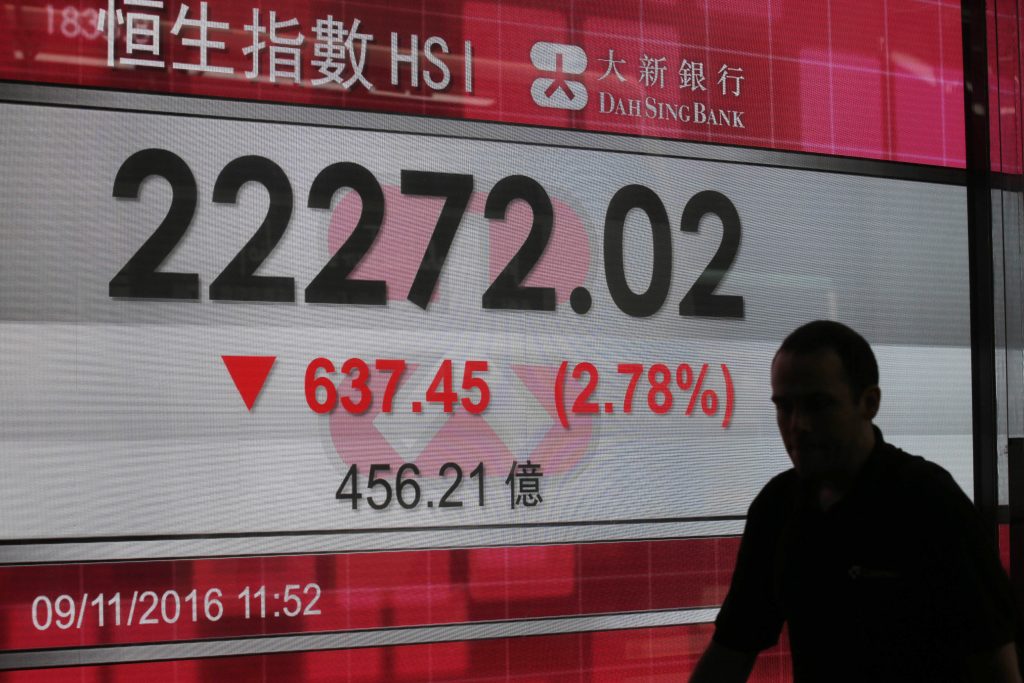 The uncertainty over the outcome of one of the most contentious U.S. presidential elections in modern history rattled investors across the world. Japan’s Nikkei index plunged more than 800 points, or almost 5 percent, while Hong Kong’s Hang Seng index lost 650 points, or 2.8 percent. Meanwhile, the Mexican peso — which has fallen when the Republican nominee rose in the polls during his campaign — nosedived to an eight-year low, according to Bloomberg.

“It’s all a little bit crazy now,” said Chris Weston, chief markets strategist at IG Markets in Melbourne. “Pollsters need to go away and have a holiday — every single one of them should be fired. Markets weren’t prepared for this.”

U.S. stock markets had surged over the past two days amid polling indicating Democratic nominee Hillary Clinton was likely to win the Oval Office. But as results began trickling in, they showed Trump with a lead in key swing states such as Florida and Ohio — and financial markets began to panic.

Trump has pledged to pull out of long-standing trade agreements if elected and slap double-digit tariffs on goods from Mexico and China. He also proposed massive tax cuts for both individuals and corporations that could cost as much as $6 trillion, according to the nonpartisan Tax Policy Center. Though Trump’s message of isolationism has resonated with voters who feel left behind in an increasingly connected global economy, many experts have warned his proposals could wreak havoc on the U.S. recovery.

Moody’s Analytics forecast Trump’s policies could lower employment by 3.5 million jobs and raise the unemployment rate to 7 percent by the end of his term. The firm also predicted the nation would enter a recession in 2018.

“Trump has not held any public office before and lacks experience of making currency and fiscal policies. He also has extreme views,” said Yang Delong, chief economist at First Seafront Fund in Shenzhen. “All these will be viewed by the investors as huge uncertainty. That’s why the markets are down and the gold price is going up.”

But one of Trump’s most prominent supporters, billionaire Carl Icahn, predicted that the sell-off would be short-lived. Trump’s campaign has argued that his aggressive policies would help lift the economy out of the doldrums and generate new growth.

“It’s going to cost the rich guys in New York money, and that’s too damn bad,” Ichan said on CNBC on Tuesday night. “But you have to think about where this country is going to be in the next five, 10 years and you can’t have it going the way it’s going.”

In China, the Communist Party’s China Daily newspaper said that whoever wins, democracy would be the loser in the United States, noting the race was viewed as a “chaotic political farce” in many people’s eyes. European leaders never hid their overwhelming preference in the U.S. vote. Among major U.S. allies across the Atlantic, leaders spoke openly of their contempt for Trump and their fear of the consequence should he be elected.

Protocol normally calls for foreign leaders to maintain strict neutrality in the internal affairs of their allies. But that didn’t stop President Francois Hollande from declaring that some of Trump’s policy positions made him want “to retch.” The British Parliament even debated banning the New York billionaire from its shores.

The exception to the anti-Trump sentiment in Europe came from far-right leaders and other anti-immigration populists.

British Brexit campaigner Nigel Farage cheered Trump’s rise and appeared alongside him at U.S. rallies, urging America to stand up to the establishment in the way that he said the British public had with its EU referendum in June. Hungarian Prime Minister Viktor Orban, who built a fence to block migrants amidst the refugee crisis, was among the few governmental leaders in Europe to back Trump.