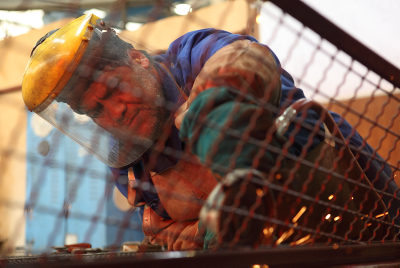 Young Israelis who are looking for a job would do well to learn crafts like woodworking, welding and other technical-physical activities, because there is a major shortage in such workers, according to industry officials. Speaking to Yediot Acharonot, manufacturers bemoaned a lack of workers, saying that many of those who did apply for jobs were not committed to their occupations as careers, and were only doing it as a temporary activity, often while they studied academic subjects in preparation for their “real” career.

“It’s very hard to find workers,” said the owner of a kitchen design firm. “As the years go by the experienced workers are retiring, and replacing them has been very difficult. We have no choice but to convince older workers to stay on the job.”

For the young workers who join the company, training is offered – but often the company finds itself spending time, money and effort on training a worker who leaves after a short period. “Because of the shortage we have to take what we can get, including workers who are willing to stay for only a short while. Training them costs us a lot of money and time, and when they do work, their lack of experience causes mistakes that cost us as well.”

The owner of a door manufacturer said that skills involving metal and woodwork were almost non-existent in the younger generation. “Once, students would learn a skill in school and continue with it. Not anymore. We need more trade schools that can teach the skills manufacturers need. Nobody wants to work in factories; we have to do something to encourage kids to enter these careers,” he said.

A poll by the Career and Training Authority, a group sponsored by the Manufacturers’ Association, said that in 2011, 80 percent of manufacturers reported that they were having a hard time finding workers, and a third of those said that finding workers was “very difficult.” Only about a third of students study subjects such as electronics, HVAC, or non-technology related subjects that will get them a job in manufacturing; many more are needed, the Authority said.