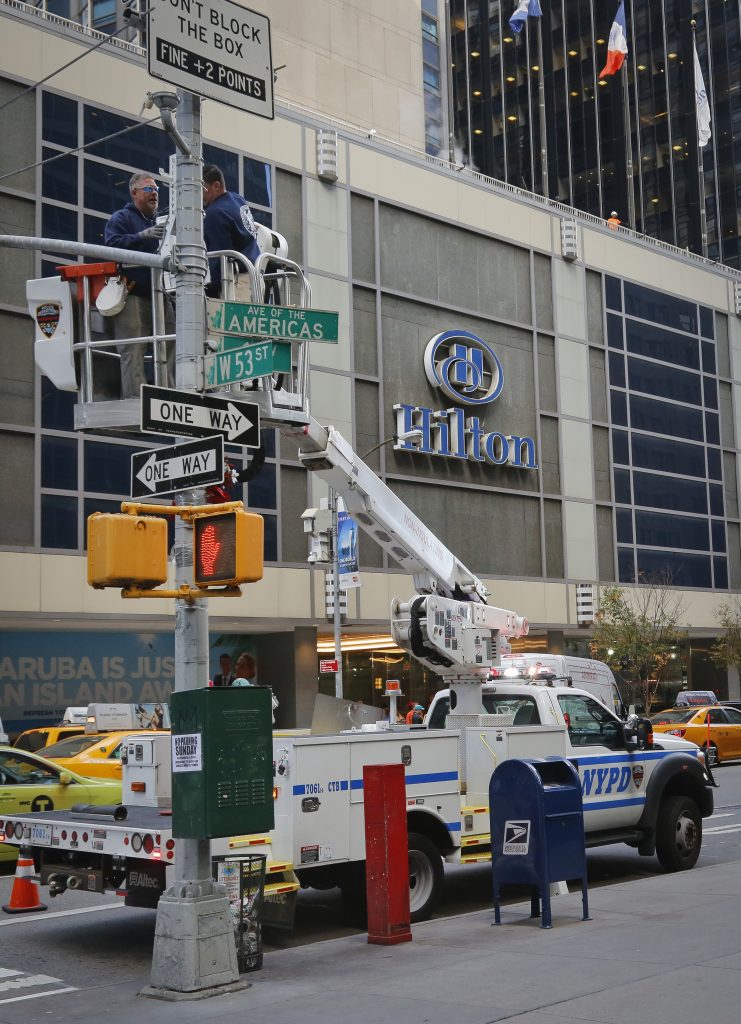 Hillary Clinton and Donald Trump could hardly be farther apart politically. But they’ll spend the decisive night of their polarizing presidential campaign barely a New York minute away from one another.

For the first time in recent memory, both major-party candidates are holding election night parties in midtown Manhattan.

Trump, the Republican New York native who embodies what people variously love, hate and love to hate about the nation’s biggest city, is headed to a power hotel that boasts of having hosted every president for more than half a century. Clinton, the Democrat transplant who started her political career in New York, will be at a sprawling convention center with a perhaps symbolic glass ceiling.

If the faceoff between the would-be first woman president and the billionaire businessman seeking the presidency as his first political job is an only-in-America story, its denouement stands to be an only-in-New York election night.

On Thursday, workers were building a stage shaped like the United States, complete with outlying pillars for Alaska and Hawaii, at the Jacob K. Javits Convention Center, the block-sized venue where Clinton announced last week she’ll gather with supporters.

Trump’s chose the New York Hilton Midtown, a few blocks from his Trump Tower home. The Hilton claims to have hosted every president since John F. Kennedy, and its big ballrooms are go-tos for many of the city’s business, social and political gatherings.

New York City has been a crucible for political ambition and drama since the nation’s formative years, when it was one of the first capitals.

But this year’s presidential race is the first since 1944 to feature two major-party candidates from New York state. (Clinton lives outside the city, in Chappaqua.)

Some New Yorkers are taking their own steps to try to keep an emotional lid on the night.

Event planner Linnea Johansson said she became concerned as the campaign went through its bitter autumn “that people might start getting a little angry with each other.”

So she made sure the Brooklyn party she’s planning will offer alternatives to talking politics, such as a team trivia contest.

The party theme? “Leave Your Vote at the Door.”