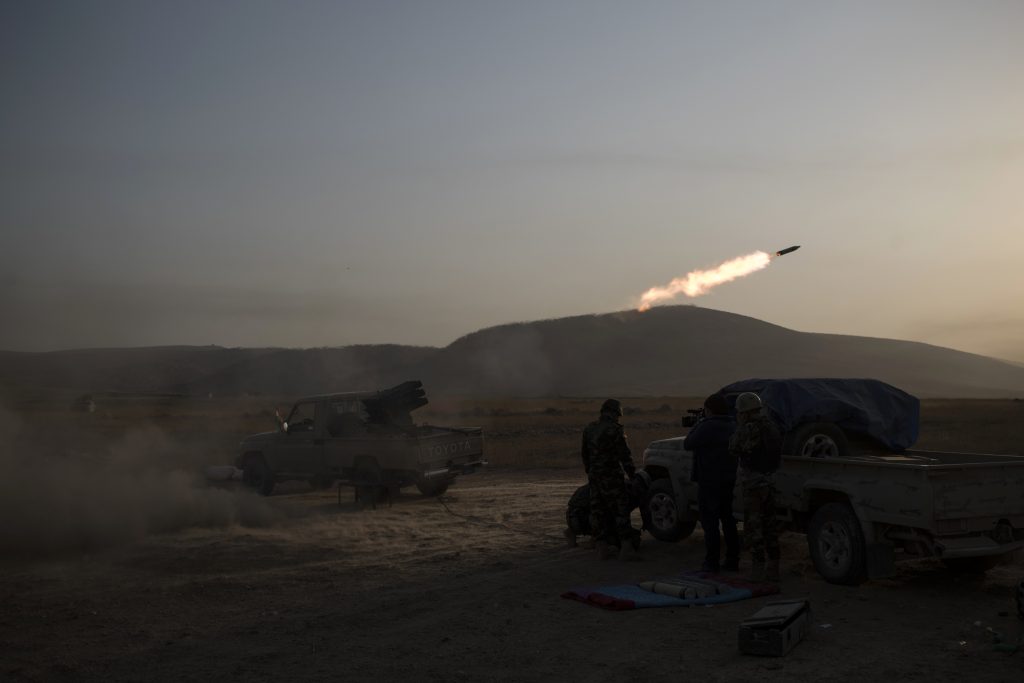 Iraqi Kurdish peshmerga forces stormed an Islamic State-held town northeast of Mosul on Monday, clearing a pocket of terrorists outside the city while Iraqi troops wage a fierce urban war with the jihadists in its eastern neighborhoods.

As the operation against Islamic State’s Iraqi stronghold entered its fourth week, fighters across the border launched an offensive in the Syrian half of the jihadist group’s self-declared caliphate, targeting its base in the city of Raqqa.

An alliance of U.S.-backed Kurdish and Arab groups launched the campaign for Raqqa, where Islamic State has been dug in for nearly three years, with an assault on territory about 30 miles to the north, which they have dubbed Euphrates Anger.

The battle for Raqqa will be every bit as challenging as the one for Mosul, with both cities carrying huge strategic and symbolic value to the jihadists and their self-declared caliphate covering territory in both Syria and Iraq.

The Iraqi operation, involving a 100,000-strong alliance of troops, security forces, Kurdish peshmerga and Shiite militias, backed by U.S.-led airstrikes and a global consensus against the jihadis, has so far gained just a small foothold in Mosul.

The Raqqa campaign, launched amid a complex civil war in Syria which has divided world powers, is not coordinated with President Bashar al-Assad or the Syrian army. The Kurdish element of SDF groups fighting towards Raqqa also makes them an unlikely force to recapture the Arab city.

“It is difficult to put a time frame on the operation at present. The battle will not be easy,” a Syrian Kurdish source said.

In Bashiqa, some 10 miles from Mosul, a 2,000-strong peshmerga force sought to drive out the militants from the town, which lies on the Nineveh plains at the foot of a mountain.

Artillery pounded the town before the Kurdish peshmerga and U.S. Special Forces entered the town in armored vehicles, Humvees and on foot.

“Our aim is to take control and clear out all the Daesh (Islamic State) militants,” Lieutenant-Colonel Safeen Rasoul told Reuters as the operation began. “Our estimates are there are about 100 still left and 10 suicide cars.”

Islamic State terrorists have sought to slow the offensive on their Mosul stronghold with waves of suicide car-bomb attacks. Iraqi commanders say there have been 100 on the eastern front and 140 in the south.

As a peshmerga column moved into Bashiqa on Monday, a loud explosion rocked the convoy, and two large plumes of white smoke could be seen just 50 feet away. A peshmerga officer said two suicide car bombs had tried to hit the advancing force.

“They are surrounded … If they want to surrender, okay. If they don’t, they will be killed,” said Lieutenant-Colonel Qandeel Mahmoud, standing next to a Humvee, supported by a cane he said he has needed since he was wounded in the leg by two suicide car bombers four months ago.

Armed U.S. soldiers, part of a 5,000-strong force Washington says is advising and supporting the Iraqi offensive, were accompanying the peshmerga in Bashiqa through streets lined by rows of damaged houses, some with entire floors collapsed.

Fighting was intense and at one stage a convoy of 40 vehicles was held up by a single Islamic State sniper.

Kurdish military authorities later said the peshmerga were carrying out house-to-house searches in the town.

In eastern districts of Mosul, which Iraqi Special Forces broke into last week, officers say terrorists melted into the population, ambushing and isolating troops in what the Special Forces spokesman called the world’s “toughest urban warfare.”

Mosul, the largest Islamic State-controlled city in either Iraq or Syria, has been held by the terror group since it drove the army out of northern Iraq in June 2014. The campaign to retake it is the most complex military operation in Iraq since the 2003 U.S. invasion which toppled Saddam Hussein.

Twin offensives on Raqqa and Mosul could bring to an end the caliphate declared by Islamic State leader Abu Bakr al-Baghdadi from the pulpit of a Mosul mosque in 2014.

Baghdadi, whose whereabouts are unknown but who is believed to be in northern Iraq close to the Syrian border, has told his followers not to retreat in the “total war” with their enemies.

They have lost ground on all fronts, however, despite waging a fierce and brutal defense.

One Mosul resident told Reuters by phone he had seen 30 bodies and about 40 seriously wounded people brought into Salam Hospital, used by Islamic State to treat its casualties.

Elsewhere in the city, three residents said the Islamic State presence across Mosul was far less visible than in recent days, but cautioned that the terrorists had dropped out of view before and then reappeared en masse.

Others said there were signs that some of Islamic State’s local supporters had fled, including one family whose son joined the jihadists when they took over Mosul. The family fled without warning, and two days later Islamic State put up signs on their empty house which read: Property of Islamic State.

Some were frustrated and frightened by what they said was the slow army advance. “We’re asking ourselves, what’s happening? We were expecting the Iraqi forces to reach us much quicker,” he said.

To the south of Mosul, security forces said they had recaptured and secured the town of Hammam al-Alil from Islamic State terrorists, who they said had kept thousands of residents as human shields as well as marching many others alongside retreating militants towards Mosul as cover from airstrikes.

The United Nations has warned of a possible exodus of hundreds of thousands of refugees from a city which is still home to up to 1.5 million people. So far, 34,000 have been displaced, the International Organization for Migration said.

Security forces on the southern front have continued their advance, reaching within 2.5 miles of Mosul’s airport, on the southern edge of the city and on the western bank of the Tigris River which runs through its center.

To the north, a military statement said the army’s Sixteenth Infantry Division had also recaptured the village of Bawiza and entered another area, Sada, on the city’s northern limits, further tightening the circle of forces around Islamic State.

Shiite militias known as Popular Mobilization forces are also fighting to the west of Mosul to seal the routes to the Islamic State-held town of Tal Afar and its territory in neighboring Syria, to prevent any retreat or reinforcement.