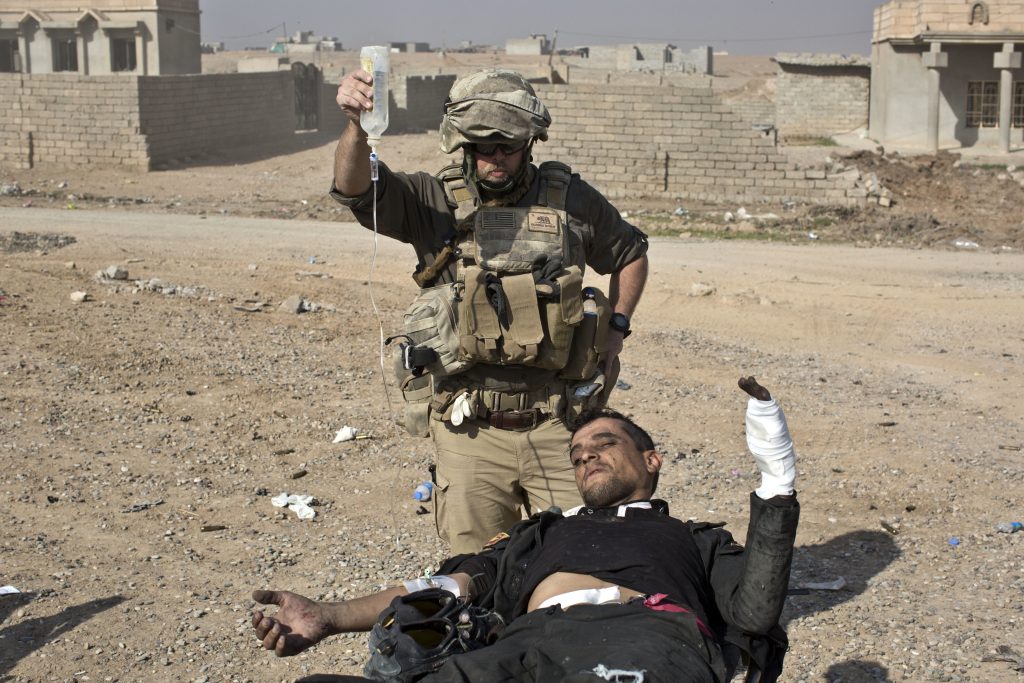 When Iraqi forces pushed into Mosul’s urban center last week, Derek Coleman, an American volunteer medic, was among those treating the wounded at a front-line field clinic.

He said he helped treat 44 casualties before he lost count.

“I think the Iraqi (military) got an awakening when they pushed too far forward,” Coleman said, flipping through a notebook he uses to keep records of his cases. In all, 12 soldiers died at the clinic on Friday, he said. “We had two Humvees just loaded with dead bodies.”

As Iraqi forces struggle to secure the gains they made on Mosul’s eastern edge, the fight against Islamic State militants has quickly transformed into close-quarters urban combat. With it, casualties among Iraq’s troops and civilians are spiking, though Iraq’s military has not released official death tolls.

As Coleman spoke, hundreds of civilians could be seen in the distance pouring out of Mosul on foot, many holding white flags made of scraps of dishtowels, torn clothing and pillowcases. Iraqi soldiers gathered them on street corners and loaded them on trucks to be taken to camps for the displaced.

At least twice on Sunday, IS mortar rounds targeted the fleeing civilians gathered around the aid station, sending medics running for cover behind nearby buildings.

At times the flow of wounded civilians and soldiers was constant, with vehicles racing from the front lines to reach the cluster of cots beside two ambulances.

“It’s a huge urban environment,” Reed said. “Imagine trying to go into Brooklyn or Charlotte, North Carolina, where you have huge buildings.”

“Now imagine that from every door, window, that kind of gunfire can come out of it at any moment,” he said as small arms fire echoed from the front line in the distance.

“Nothing’s built for a suicide vehicle.”

In late afternoon, a soldier was brought in with multiple gunshot wounds. Blood soaked through his T-shirt and began to pool underneath him. Medics tried to bandage the wounds. When his breathing stopped, Reed began to perform chest compressions.

The soldier’s eyes glazed over.

A few minutes later, Reed called for a body bag and removed the IV from the man’s arm. The half dozen medics and soldiers gathered around stopped what they were doing.

“We don’t have a name for him,” Special Forces Maj. Ahmed Hussein said, then used a black marker to write, “Heroic martyr, Mosul division” on the body bag.