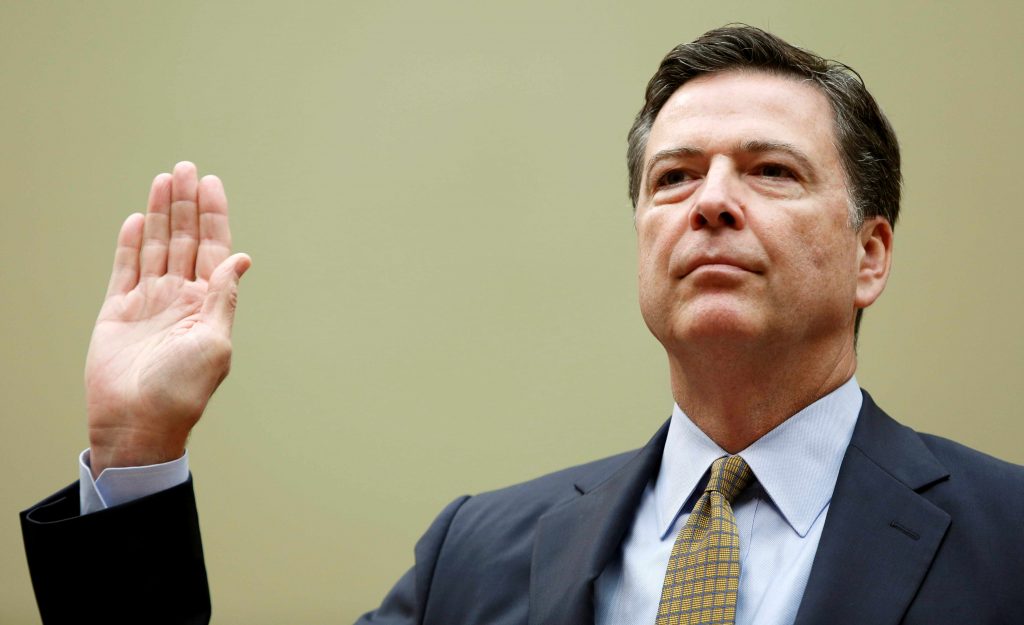 James Comey did it again.

The FBI chief gave Americans — both the red states and the blues states — something to stew over in his August Surprise, when he slammed Hillary Clinton for her “extremely careless” attitude when it comes to national security but declined to recommend an indictment.

Then came the October Surprise, the mythical last-minute news said to change elections before the candidate has a chance to respond. He will refresh the investigation into Clinton’s illegal email server after a new cache came to light. Do the new emails contain classified information? I don’t know, Comey said. Time will tell.

“Time” turned out to be relative. The November Surprise — the “Two Days Before Election Day” Surprise — came out of the blue Sunday. Using computer software and working around the clock, agents managed to separate all of Clinton aide Huma Abedin’s messages and check them. Again, not enough to indict.

What gives? What animates Jim Comey? Is he a rigorously nonpartisan nerd, colorblind to the blues and the reds? Here are some questions and answers on the latest news:

Is Comey a Democrat or Republican?

Comey is a registered Republican, a fact cited gleefully by President Obama as he nominated him three years ago to his current job. However, his claim to fame for the president was not his voting record but a surreal hospital scene which took place when he was deputy attorney general. In 2004, President George W. Bush was frustrated when Comey refused to reauthorize a secret no-warrant wiretapping program. Attorney General John Ashcroft was hospitalized with a serious illness and Bush tried to get around Comey by having Ashcroft sign the authorization.

Sirens blaring, Comey raced to the intensive care unit at George Washington University Hospital. He arrived to find two top Bush aides hovering over the ailing Ashcroft, who could barely lift his head to refuse his signature.

In his three years on the job, Comey has developed a squeaky-clean reputation for not taking political sides. His announcement during the summer that he would not pursue an investigation against Clinton prompted praise from the media and Democrats and cries of “Rigged!” from Donald trump and his supporters.

His second message 10 days ago jolting the race turned the tables. The media and Democrats pounced on Comey, declaring him a threat to democracy and a rule-breaker, with Senate Democratic leader Harry Reid saying that he regretted shepherding his nomination through the Senate. Democrats couldn’t utter the word “rigged” after having savaged Trump for saying so earlier but they engaged in some highly unusual rhetoric against a top law enforcement official.

Obama’s response was conflicted. His official side, embodied by the White House press secretary, declared that he would not criticize Comey, whom he said had his full confidence. But the president himself, in an interview last week, criticized Comey for throwing the election into chaos “on innuendo.”

Will Comey Suffer Consequences for His About-face?

Comey is in his third year of a 10-year term. Although he cannot be fired, however, it will certainly be awkward for him to brief the next president, no matter whom he or she is.

Why Are Lawmakers Calling for Hearings Into the FBI?

Lawmakers from both sides of the aisles are calling for hearings into the FBI. If Comey had hoped to satisfy both streams he was sorely mistaken. Sen. Al Franken (D-Minn.) called for hearings Sunday into what he called the “rogue elements” in the FBI that he says are trying to influence the results of the presidential election. This comes months after Republicans called on Comey to testify after he left Clinton off the hook.

It appears that both Comey and Clinton will be in the midst of the judicial storm for a long time.

Why Did Comey Throw the October, and Then November, Surprise?

Comey has that rare poker face where it’s impossible to know where he stands on an issue. He is said to have the trust of his agents and, aside for the events of the past few months, the confidence of lawmakers from both parties.

So why did he do what he did? Good question. Either he is the ultimate nerd, putting country over party and blind justice over the furtherance of his career, or, as is likely, the intense pressure did him in.

Is this a tale of two newspapers in one? A conflicted editorial board? No, just a Clinton weather vane. Democrats have mastered the media game and perfected the art of pressuring the modern day town criers. The first editorial was penned the day Comey said he would not pursue an indictment. Another editorial, after he reopened the probe, had the opposite headline.

Back in September, there was a townhall interview in which both two candidates participated separately. The moderator treated both mildly, not bringing up the email scandal with Clinton and not challenging Trump on his statements. There was a Democratic outcry for the “unfair” way the moderator operated.

The intended target of the “outrage” got the message. At the first presidential debate the following week, Clinton was treated with kid gloves.