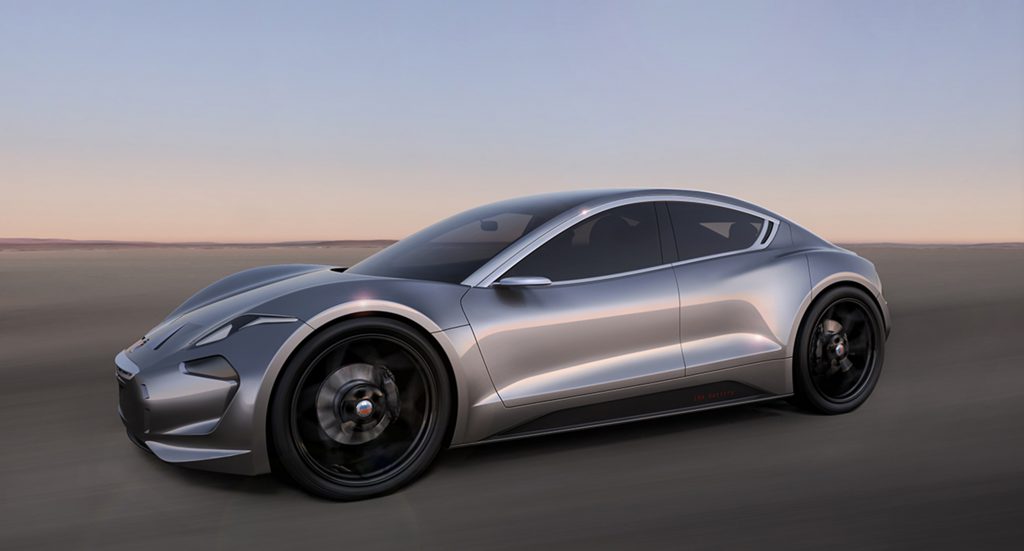 Henrik Fisker is returning to the electric vehicle market with a high-cost, high-mileage, battery-powered supercar.

The EMotion, whose name Fisker said “reflects the emotional connection with the consumer,” will be produced at the Michigan plant that is currently building the Fisker-designed Force 1, a $268,000 gasoline-powered car that the Los Angeles-trained auto builder is selling through his VLF Automotive. (The first of a limited run of 50 Force 1s is just now being delivered to its first customer, in Texas, Fisker said.)

The new vehicle, which could be shown as early as mid-2017 and begin production not long after, will be “sporty and spacious,” Fisker said.

The vehicle will include a large curved front windscreen pushed forward, diving into a low bonnet. The rear features an integrated spoiler and “aggressive functional diffusor to aid aerodynamics,” which will help the car achieve a 161 mph top speed and a 400-mile electric range, he said.

It will also recharge faster than any electric car currently on the market — and have longer battery life, he said.

That will be possible, Fisker claimed, because he and a group of engineers have hit on radical new battery technology that reduces weight and size while increasing power density. The EMotion will use a new battery technology using graphene, with battery packs produced by Fisker Nanotech, a joint venture between Fisker Inc. and Nanotech Energy Inc.

At the same time, he said, they have reconfigured the layout of the electric power train, and found a new way to integrate the battery into the vehicle.

More power per size allows for more usable space in the car, which Fisker said would offer more legroom than many of the best European luxury cars.

The EMotion will be equipped with hardware that will allow fully autonomous driving when approved and released by a soon-to-be-announced partnered supplier, he said.

Fisker said the car will be a “low-volume” production — “a few thousand a year” — but would be followed by a second, more affordable vehicle that could be manufactured in the “hundred thousand a year” range.

This approach is different from Fisker’s previous production plan, which fizzled after problems with the Fisker Karma hybrid led in time to a bankruptcy and sale of assets.

A Chinese company ended up owning the Karma name, which has resulted in a new Karma Automotive, currently building electric Revero sedans in a plant in California’s Moreno Valley.

Fisker said he took several lessons away from the previous iteration.

“The two learnings I’ve taken from starting Fisker are that you have to be in charge of your own battery and testing and all that,” the designer said. “And the other is with manufacturing. It’s very tough to do high-volume manufacturing, for a startup company. The Fisker Karma was a low-volume vehicle with expensive tooling. This time we want to deploy most of our capital on the high-volume vehicle.”

Fisker declined to say whose capital he’ll be spending.

The new vehicle will feature dihedral “butterfly” front and rear doors — somewhat akin to the doors on a McLaren, and a cousin to the troublesome “falcon wing” doors on the Tesla Model X.

Fisker said his engineers have been working “in stealth mode” for a long time on the doors, and that they should not present the same difficulties the “falcon wing” doors did for Tesla and its co-founder, Elon Musk.

Indeed, Fisker had words of admiration for his luxury EV competitor.

“You can go the safe way, or you can innovate and do something new,” he said. “Elon decided to do that, and I think that’s great. Someone has to take the first risk.”

Fisker was more tight-lipped about the specifics of his new battery technology, except to praise its potential. Saying more, he said, would tip off his rivals.

“There are a lot of new startups here in California, so we have to keep it confidential,” Fisker said.

But they exist, right?

“We have a secret battery plant, somewhere in California, that is already producing the new cells,” Fisker said. “No one knows where it is. Very few people on my team are allowed to visit it.”