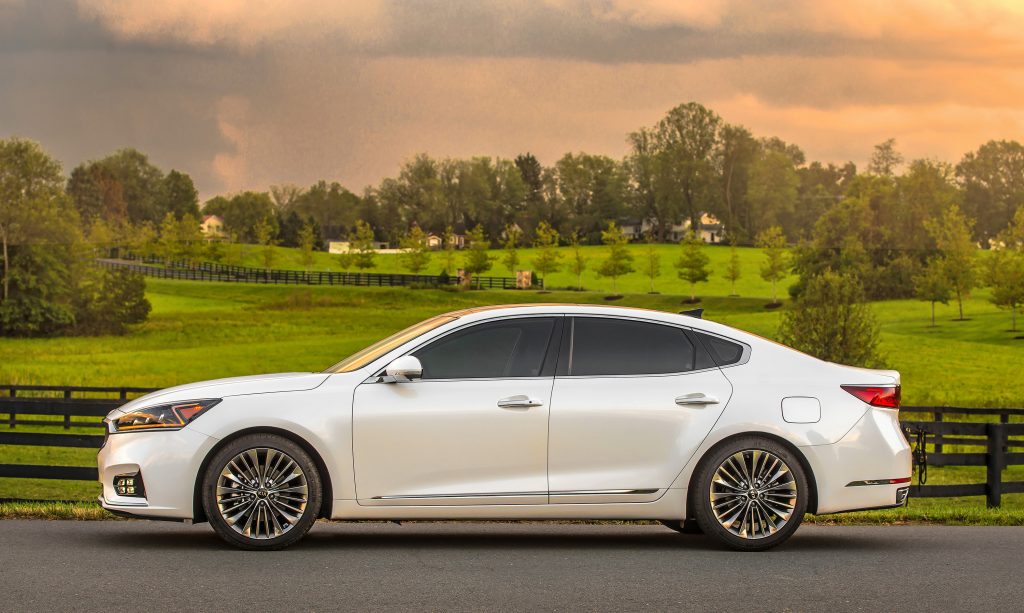 Why do full-size sedans have such ridiculous model names?

Outside the Dodge Charger, whose exciting-sounding name is appropriate given its muscle-car past, most names in the segment of easy-going rides are problematic.

Would you call a full-size Ford a bull? Well, the Taurus has a Volvo-derived chassis, so perhaps it’s an appropriate title, but I’m not entirely sure.

The name of Buick’s biggest sedan, the LaCrosse, meanwhile, is definitely a head-scratcher, stemming from a French term meaning “game of hooked sticks.”

So excuse me if I was never overly excited about the Kia Cadenza.

Every time I saw the name, I heard some distant relative, the one with a voice that can shatter glass, yelling, “Lawrence, I told you to put that glass in the credenza.” Eek.

Of course, my apprehension may have been due to the car itself.

The first generation wore a design that was sanitized for your protection and looked as exciting as the largely snore-inducing segment.

Did it really, I wondered when testing it, have to be so dull?

The answer arrives with the car’s 2017 model. Neither the word Kia nor Cadenza prepared me for how good it truly is.

These days, Kia, which built its reputation competing on price, competes on overall quality — but hasn’t been able to totally shake its blue-plate-special image despite impressive products like the Soul, Optima and K900.

The 2017 Cadenza, however, is a better car than any of them.

Large for its segment, it feels grand while you pack its usefully shaped trunk or load passengers into its expansive cabin.

That interior, by the way, at least on the top-of-the-line SXL trim test car I drove, is beautifully finished with unbelievably soft leather, black carpeting, wood-grain trim and gray suede headliner.

Its infotainment and climate controls, meanwhile, are large and easy to use, conveniently positioned below an 8-inch touchscreen. And there’s plenty of storage, including a mobile phone compartment with a USB port ahead of the shifter, a pair of cup holders and a large console bin.

The car is stuffed with technology features including power-folding outside mirrors, smart key access, rain-sensing windshield wipers, Android Auto and Apple CarPlay, and a heads-up display. That’s not to mention its 630-watt, 12-speak audio system.

Its drive, meanwhile, is well-balanced. It’s no sports sedan — but neither is it a soggy senior shuttle.

There’s a sense of serenity about this car, with a ride that’s quieter than a college library on a Saturday night. The suspension flattens out the lumpiest of roads, with the floatiness typical of Korean cars kept in control without deterioration in ride comfort.

When you tap your inner Andretti and drive more aggressively, you’ll find the Cadenza leans in corners but hangs in there, remaining safely on course.

There’s a driving mode select switch, but the car’s Sport mode changes little, as the new eight-speed automatic transmission shifts so unobtrusively, the distinction is of little use. Comfort mode does soften things noticeably, but it’s best to stick with the aptly named Smart mode.

Power comes from a 3.3-liter double-overhead cam V-6 rated at 290 horsepower. And while the engine mostly seems up to whatever tasks are at hand, there are times when it could use a bit more snap.

It makes for a beguiling package, one that’s perfectly sized, attractively styled and remarkably balanced.

It also makes me wish it had another name. Or maybe not.

For this new Kia is so good, instead of hearing, “I told you to put that glass in the credenza,” perhaps I’ll hear, “Put yourself in a Cadenza.”

Base prices: Not available