Politics Trump Rushed Off Stage in Reno By Security, But Quickly Returns
Politics 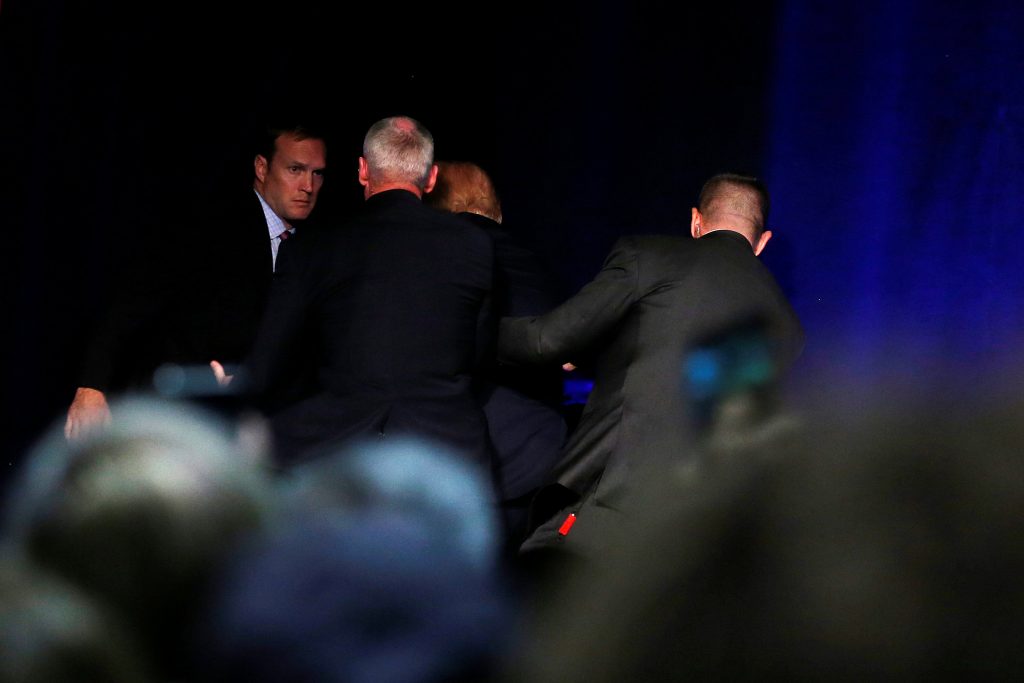 Donald Trump was rushed off stage Saturday night during a campaign rally here as security officials swarmed, but the candidate emerged back on stage after a few minutes and finished his speech.

Some kind of a disturbance had occurred in the front of the room where Trump was speaking. He put his hand above his eyes to peer out into the crowd. As he did so, a security official rushed to Trump’s side and escorted him off stage. People near the front of the room suddenly scattered as U.S. Secret Service and uniformed officers jumped the barricades to apprehend an unidentified man.

Trump later concluded his rally without further incident. It was not immediately clear what the cause of the disturbance was.

Earlier in the day, Hillary Clinton’s campaign announced she will campaign in Michigan on Monday, as polls show her once-comfortable lead in the state eroding and as Republican Donald Trump eyes it as a potential way to come from behind in the hunt for electoral votes.

That announcement from the Clinton campaign came as Trump also rejiggered his itinerary, making plans for last-minute stops in Virginia, where Clinton has led but Republicans are catching up.

The GOP nominee spent Saturday hopscotching the country, rallying with supporters in North Carolina, as well as Florida, Colorado and Nevada – and he announced plans to visit Minnesota, a traditionally Democratic state where polls showing him trailing by about five points. In a speech in Nevada late Saturday, Trump attacked elections officials for allowing a predominantly Hispanic early voting site in the Las Vegas area to stay open for “hours and hours.”

President Barack Obama will also campaign in Michigan on Monday, suggesting that Democrats see danger signs there. Clinton will be in Grand Rapids, Obama in Ann Arbor. Former president Bill Clinton will make a stop in Lansing on Sunday.

“There are just three days left in this most consequential election,” Clinton told a cheering crowd of about 10,000 an open-air rally and concert in Philadelphia on Saturday night.

Clinton noted the millions of people of have voted early and urged Pennsylvania voters to help “send a message” about American values and ideals.

Over the last two weeks much of Clinton’s focus has been on Florida and North Carolina, as well as Nevada, where early voting is now winding down.

But her campaign manager Robby Mook, conceded to reporters on Saturday that “we have seen tightening in the Midwest generally this cycle, and we are taking that seriously.”

Clinton communications director Jennifer Palmieri told reporters Saturday that in addition to a previously announced stop in Manchester, New Hampshire, on Sunday night, Clinton will add a rally in Cleveland earlier Sunday. On Monday in addition to Michigan, Clinton will add a midnight rally in Raleigh, N.C. Another large evening rally had also been announced for Philadelphia that night.

Palmieri said that Khizr Khan will speak at the New Hampshire rally. Khan is the father of fallen soldier Humayun Khan, whose challenge to Trump over the Republican’s proposed ban on Muslim immigration was among the most memorable moments of the Democratic convention.

Trump’s focus on Saturday night was Nevada, where polls show the race tied.

Early voting totals in Clark County, Nev., which encompasses Las Vegas, topped 57,000, according to local officials. A supermarket doubling as an early-voting site in the county was allowed to stay open for two additional hours on Friday night as thousands of people remained in line to vote. It is customary for state elections officials across the country to authorize keeping a polling site open later if there are long lines at closing time.

Trump continued his attacks on Clinton’s emails throughout the day Saturday, citing the FBI’s announcement last week that it would revive an inquiry into her use of a private email server at the State Department. In Reno, he said that if Clinton were elected, her presidency would lead to “an unprecedented constitutional crisis.”

“We could very well have a sitting president under felony indictment and ultimately a criminal trial. It would grind government to a halt, of course that’s what we have right now under Obama anyway,” he told the crowd in Reno. “We need a government that can work, and work well from day one for the American people. That would be impossible with Hillary Clinton, the prime suspect in a far-reaching criminal investigation.”

Trump, Pence and key campaign surrogates also will swing through Virginia this weekend and into Monday. Trump will hold a 10 p.m. rally Sunday at a fairgrounds in the Northern Virginia swing territory of Loudoun County, his campaign announced on Saturday. Pence was scheduled to appear at a Richmond event Saturday afternoon and at a rally at George Mason University at 8 p.m. Saturday. Two of Trump’s children – Donald Trump Jr. and Ivanka Trump – are planning stops in Northern Virginia on Sunday and Monday, respectively.

In the closing days of the campaign, polling averages compiled by The Washington Post continue to show a close contest in several battleground states. In Michigan, Clinton now holds just a two-point edge over Trump, 43 to 41 percent. She also holds a slim lead in New Hampshire (43-41), which accounts for the renewed attention there in the closing days.

The race remains tick-tock tight in Nevada, where the candidates are tied at 44 percent each. In Florida, Clinton has a one-point, 47 to 46 percent advantage. Trump leads in Georgia (47-45); Iowa (46-41); and Utah (35-28) where third-party candidate Evan McMullin has been polling well.

Poll averages calculated by The Washington Post for Clinton and Trump reflect recent polls that also include McMullin, Libertarian Gary Johnson and Green Party candidate Jill Stein where they are on the ballot and where results are available.

As the race enters its final stretch, the Clinton campaign continues to push back aggressively against the FBI’s decision to revive the inquiry into Clinton’s email.

Campaigning in Florida on Saturday, Kaine, D-Virginia, the Democratic vice presidential candidate, sharply criticized the FBI and its director, James Comey for the development.

In an interview with the Fusion network, Kaine faulted Comey for breaking agency protocol by discussing a politically sensitive case so close to an election.

Comey’s decision to alert Congress about his review of the Clinton case “suggests that it’s probably more likely explained that [Comey] knew that the FBI is not only a leaky sieve but there were people within the FBI actively working – actively working – to try to help the Trump campaign,” Kaine said. “This just absolutely staggering, and it is a massive blow to the integrity of [the FBI].”