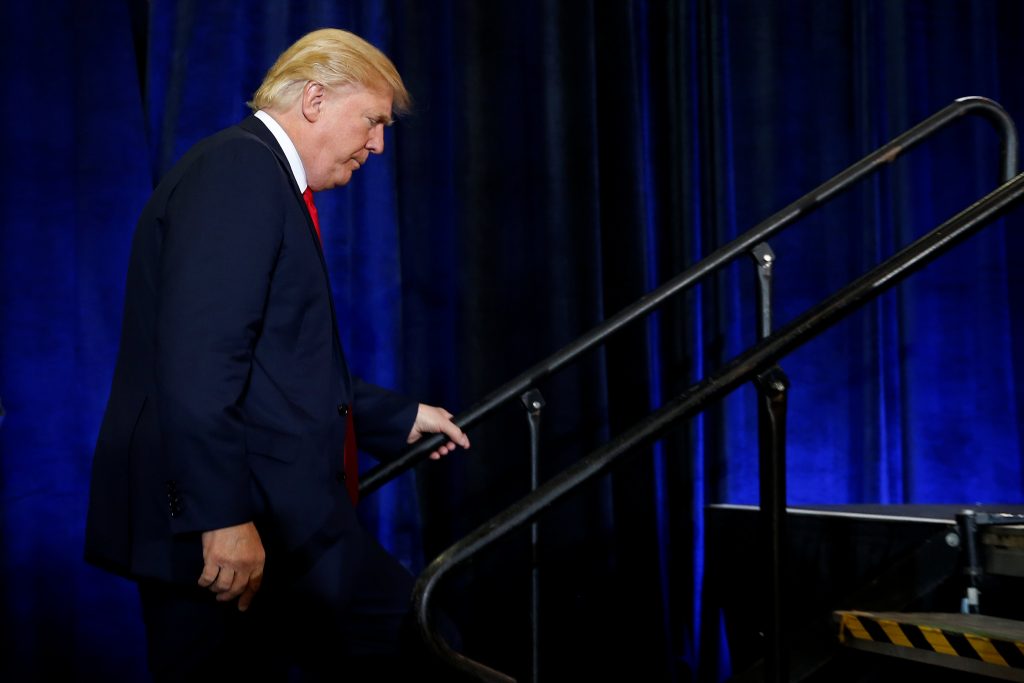 The end of a wild campaign happily near, her presidential prize tantalizingly close, Hillary Clinton took the stage in Pembroke Pines, Fla., Saturday afternoon in torrential rain to ask voters one more time to stick with her.

“Boy, is this a hardy group,” she said, overlooking an outdoor crowd sheltering under umbrellas and makeshift ponchos.

With people eager to flee the downpour, Clinton’s speech lasted about seven minutes — perhaps the shortest of the presidential campaign.

Clinton, her voice raspy three days before the election, bragged about her support “breaking records in a lot of places.”

“We are seeing tremendous momentum,” she said.

One of those places is South Florida, one of the most important regions for Clinton in the nation’s largest swing state. Democrats narrowly lead Republicans in voter turnout so far across the state, in no small part because of voters in solidly Democratic Miami-Dade and Broward counties.

The last weekend of early voting, which ends at 7 p.m. Sunday, normally brings multitudes of Democrats to the polls.

Later, Clinton dropped in on her Little Haiti field office, decorated inside with many signs reading “Ayisyen pou Hillary” — Haitians for Hillary, in Creole.

“Haiti has been close to my heart for a very long time,” Clinton said. “And we really feel a sense of connection to Haiti and all of the challenges that Haiti has faced — the continuing terrible consequences of weather, the earthquake in 2010 — so I want to be a good partner with the people of Haiti.”

Donald Trump has tried to win over Haitian Americans — or at least keep them from voting for Clinton — citing misgivings among some Haitians about the Clinton Foundation’s and State Department’s work in the country. Miami is home to the largest Haitian community outside Haiti, and Haitian Americans vote reliably Democratic.

“We don’t need [singers] to fill up arenas,” Trump said. “We do it the old-fashioned way.”

Promising victory in Florida — which he needs to have any shot at winning the election — Trump appeared before a crowd of several thousand people at a rally that, like Clinton’s, came together with short notice.

“As you know, the Cubans just endorsed me,” Trump said, apparently referring to the backing he recently received from Miami Bay of Pigs veterans.

“We are the movement of the future,” he said. “They’ve never seen a movement like this.”