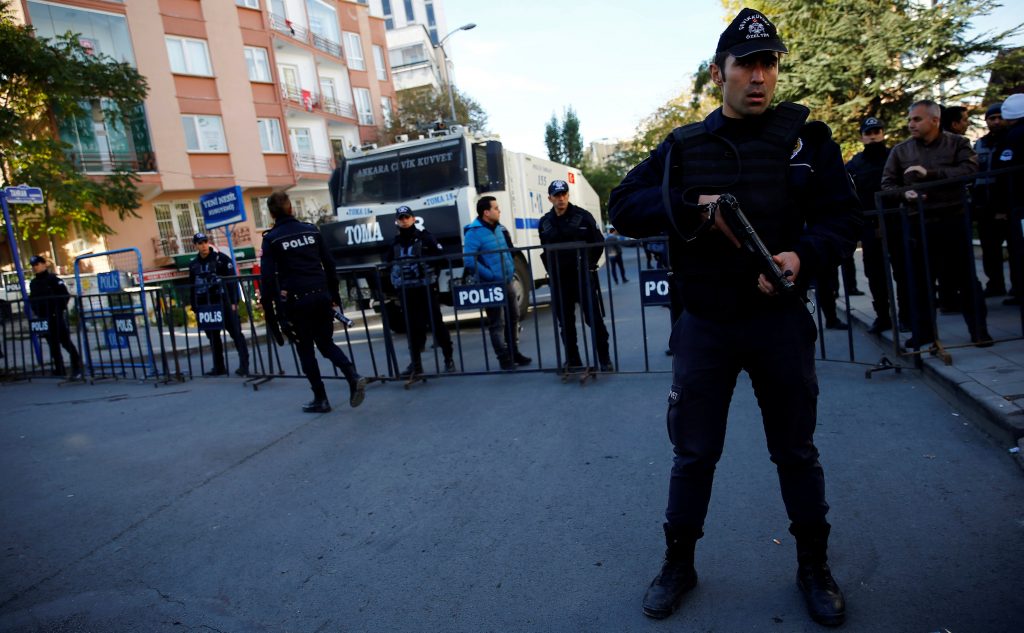 The blast struck an area near the police station where some of the party leaders were being held in a terrorism probe, the sources said. It tore off the facades of buildings and firefighters were searching debris for people trapped there.

Police raided the homes and detained the joint leaders of the Peoples’ Democratic Party (HDP), the second-biggest opposition party in the national parliament, and nine other HDP lawmakers early on Friday after they refused to give testimony for crimes linked to “terrorist propaganda.”

Southeastern Turkey has been rocked by political turmoil and violence for more than a year after the collapse of a ceasefire with the Kurdistan Workers Party (PKK) terror group, which has waged a three-decade insurgency for Kurdish autonomy.

The lira currency hit a new record low against the dollar after the arrests, trading at 3.1319 in morning trade.

President Tayyip Erdogan and the ruling AK Party accuse the HDP of links to the PKK, which is deemed a terrorist organisation by the United States and the European Union. The HDP denies any direct links.

The government introduced a nationwide state of emergency after a failed military coup on July 15 which gave it broad powers to round up suspects linked to the putsch. More than 110,000 civil servants, soldiers, police, judges, journalists and other officials have been suspended or detained.

The authorities have also used the emergency powers to round up pro-Kurdish opposition politicians, including Diyarbakir’s joint mayors, who were detained late last month, and have closed all major Kurdish media outlets.

The Interior Ministry said Friday’s detention orders were for 13 members of parliament, but two were abroad and were therefore not immediately detained.

“The HDP calls on the international community to react against the Erdogan regime’s coup,” the party said on Twitter.

A court official said the prosecutor was seeking Demirtas’ formal arrest and that both he and Yuksekdag were in court after police questioning.

Police also raided and searched the party’s head office in central Ankara. Police cars and armed vehicles had closed the entrances to the street of the HDP headquarters. A group of protesters chanting slogans tried to reach the party offices, but were stopped by police before they could enter the street, a Reuters witness said.

A U.S. internet company official, who declined to be identified, confirmed that some sites were being “throttled,” a method of slowing them to the point where they are unusable.

The HDP is the third-largest party in the 550-seat Turkish parliament, with 59 seats, and won more than 5 million votes in the November 2015 general election. Parliamentarians in Turkey normally enjoy immunity from prosecution, but the pro-Kurdish party’s immunity was lifted earlier this year.

Turkey accuses the HDP of links to the Kurdish terror group PKK, which is deemed a terrorist organization by the United States, the European Union and Turkey.