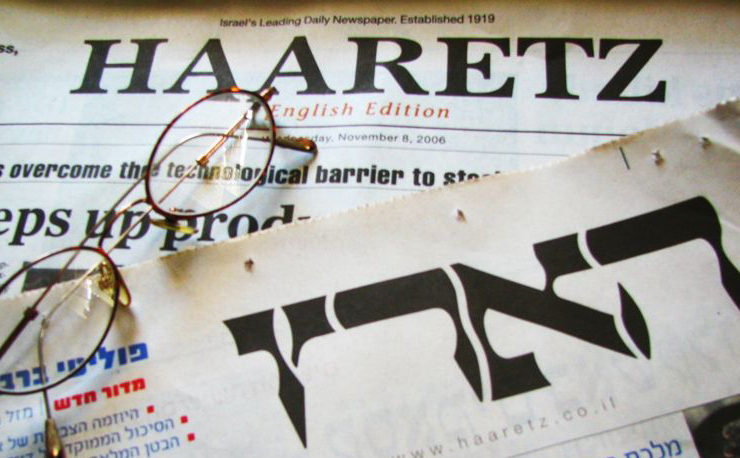 As part of its coverage of Prime Minister Binyamin Netanyahu’s attempts to shut down the nascent public broadcast organization that has not yet begun operations, Haaretz on Wednesday began a series that purports to discuss Netanyahu’s “obsession” with the media – analyzing incidents in which the prime minister has had a run-in with the media. In response, sources close to Netanyahu were quoted by Israel media as saying that they hoped the newspaper’s “Nazi ties” were not influencing its editorial decisions.

“We can only hope that the fact that German publishing house DuMont Schauberg, which in the past helped spread Nazi propaganda and which owns 20 percent of Haaretz, is not connected to this series,” the sources said.

DuMont Schauberg is one of Germany’s oldest publishers, and owns several of the country’s biggest newspapers. According to reports, however, the company had close ties with the Nazi regime during the 1930s and 1940s. Kurt Neven DuMont, the father of the current owner, was a member of the Nazi party, and his newspapers were reliable “trumpets” of Nazi ideology – even at the end of the war. In 1944, he received a top award for his perseverance in publishing, even amid heavy Allied bombing.

It should be noted that the current owner, Alfred Neven DuMont, was a teenager during the war era, and is noted for his pro-Israel and liberal stances. DuMont passed away in 2015, and was praised by German Chancellor Andrea Merkel as having “a long-standing desire for reconciliation with Israel. The more peoples and cultures draw near to each other and come to know each other, the more they enrich each other.”

Among the “charges” in the Haaretz series is the recounting of an incident in which Netanyahu called up a journalist on election day in 2015 and asked why he was not writing about the interference of the U.S. in Israel’s election. “This has never happened in a democracy,” Netanyahu allegedly said. “Because you in the media have failed, I am going to lose this election.” When the journalist said that he appeared already to be the winner, Netanyahu said that this was not the case – that leftist groups, headed by the V15 organization, “have a plan. You know what I am talking about. I don’t want to expound on this on the phone.”

Sources close to Netanyahu were quoted as saying that “the defamations that Haaretz attributes to Netanyahu prove how much the newspaper is committed not to journalism but to its agenda. This does not surprise us, as for years the newspaper has spoken ill of the IDF and Israel in general around the world. It does not represent even slightly the political stances of Israelis. It is not surprising that Israelis have completely lost faith in this newspaper.”