There is no food, so along the road through the mountains there are children begging for something to eat. Most of the trucks rumble past with donations for somewhere else. But one stopped here the other day with sacks of rice, beans and dried herring, setting off a stampede.

Valleur Noel climbed to the top of the tailgate and told everyone to calm down. It was futile. His organization, Pwoje Men Kontre, had 412 bags of food, a gift from the German ambassador and U.S. donors. Within minutes there were people pouring through a notch between the mountains, hollering and stumbling down the rocky hillside toward the truck.

“No pushing, no pushing!” Noel yelled. “There is enough for everyone!”

It wasn’t true. The latecomers got nothing. But many others did, and Figaro Phito, 29, hugged his sack with both arms, like a pillow. “This will keep us alive until another donation arrives,” he said. “Because that is our only way to survive right now.”

A month after Hurricane Matthew blasted through southwestern Haiti, the region is a blighted, apocalyptic landscape of wrecked homes and growling hunger. At least 800,000 people need food urgently, according to the United Nations, including more than two-thirds of families in the worst-hit departments of Grand’Anse and Sud.

Emergency help is arriving, but there is not enough of it, and it will take several more weeks to reach remote mountain communities where officials say the destruction was total. 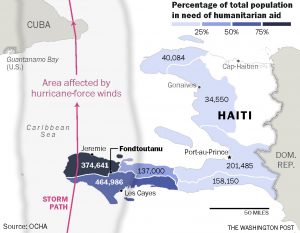 The desperation is so explosive that truckloads of food and medical supplies have been looted by crowds gathered along the roadways. A teenage boy was killed Tuesday by police in the city of Les Cayes, where hungry crowds burned tires and blocked roads. Haitian police shot four people, one fatally, on Oct. 26 in the coastal village of Dame Marie, where the arrival of an aid shipment sent crowds surging onto the docks.

The Oct. 4 hurricane hit some of the poorest places in the Western hemisphere. It smashed fishing villages and shredded mountain hamlets with the force of a bomb blast, obliterating crops, killing livestock and leaving fruit trees as bare as matchsticks.

Haiti, a country still digging out from its devastating 2010 earthquake, will need months of emergency aid to stave off famine, according to relief groups and government officials. More than 141,000 storm victims are in shelters, and those are just the ones with someplace to go.

“We are sleeping under the trees,” said Jeudina Alexis, 63, who hadn’t eaten in two days but now had a sack of food from Noel to carry home up the mountain.

In some towns, 80 to 90 percent of homes were destroyed by Matthew’s 140-mile-per-hour winds. The Category 4 storm converted tin roofing panels into flying razors and broken tree branches into spears.

The death toll stands at 546, according to the government, but local officials have reported more than twice that many killed.

Some remote mountain villages are so inaccessible that government emergency workers say they will not be able to reach them until the end of November. One man who walked out of the mountains recently after hiking two days told authorities that too many people had died in his town to bury the bodies, so villagers burned them and put the ashes in the river.

The United Nations has raised just one-third of the $120 million in emergency funding it says it needs to help 750,000 people, including 315,000 children, get through the next three months.

Noel has told his donors he will need to feed people for even longer. “If they plant sweet potatoes and corn, it will be three or four months before they can harvest, but they don’t have seeds,” he said.

The storm-hit areas have reported at least 3,500 suspected cholera cases in recent weeks, but some of the outbreaks are happening in far-off settlements where help has yet to arrive.

The aid organization Doctors Without Borders recently sent staff by helicopter to one village, Pourcine, to investigate reports of a patient with cholera, only to find 20 stricken from it. The disease spreads rampantly once the bacteria enters the water supply. “We are sending materials to contain the epidemic, but there are people dying from cholera every day,” said Emmanuel Massart, the group’s field coordinator in Grand’Anse.

It is largely a challenge of distribution. Tim Callahan, the U.S. official in charge of the American emergency response, said the U.S. government has delivered 34 metric tons of water treatment tablets to Haiti, enough to supply the entire country for three months. But getting them to families is another matter because roads are impassable or nonexistent in the worst-affected areas.

Jeremie is the only town with large-scale daily food distribution in Grand’Anse, in part because it is the only place with armed security to suppress potential rioting. The U.N. World Food Program gives out 1,000 one-month rations of rice, chickpeas and cooking oil each day in the central plaza, in the shadow of a 200-year-old cathedral with a ripped-off roof.

But the sight of so many convoys headed to Jeremie has stirred resentment in towns that say they are not getting their share. At one highway junction where a broken-down truck carrying beans had been attacked a day earlier, dozens of young men lingered on a recent day, watching for signs of mechanical trouble among the vehicles groaning up the pass, as if stalking wounded herd animals.

“We are starving, too,” said Ricardo Dauphin, 29, alongside dozens of other men in the town of Carrefour Charles, watching U.N. trucks roll by in a cloud of dust, escorted by police and Brazilian soldiers.

There is no electricity across a wide swath of southern Haiti where utility lines are down, so at night families burn storm debris and garbage with huge bonfires that leap into the darkness and foul the air.

On a muddy hillside near the town of Cavaillon, scores of people have settled in crude lean-tos made of sticks, plastic and tattered bedsheets. The nearby river flooded in the storm, forcing those living along the banks to higher ground.

Olicia Jean-Louis, 23, said her widowed mother was washed away in the storm, along with the family’s house and all the secondhand footwear they used to sell in the market. Now Jean-Louis was in charge of her siblings, ages 12, 10, 5 and 2. The youngest ones had started calling her “mama,” she said.

None of them had eaten that day, Jean-Louis said. It was raining again, and the 2-year-old boy, naked, leaned into her threadbare blue dress, his nose running.

Asked what she would do next, Jean-Louis shook her head.