Israel Minister: Police Fail to Enforce the Law at the Kosel
Israel 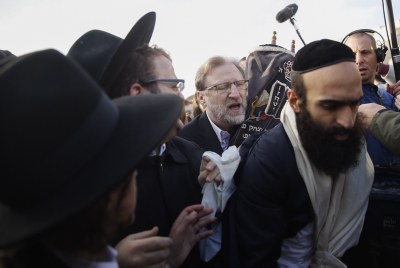 Speaking in an interview Wednesday, Religious Affairs Minister Rabbi David Azoulay of Shas said that it was disappointing that police had failed to enforce the law at the Kosel by preventing provocations by Reform groups, who marched through minyanim and demonstrated, carrying a sefer Torah.

“The rules of worship at the Kosel are clear, and that includes gender separation, and especially maintaining a peaceful atmosphere where people can daven in peace and quiet,” he said. “This is what the police are supposed to enforce, but consistently fail to do. Yet when Jews enter Har HaBayis (which is forbidden according to the poskim), police are very careful to enforce rules against praying. Any whisper or even a bow of the head is immediately halted, and the offender quickly removed. Why do they enforce the law there but not at the Kosel?”

Witnesses said that tensions were high as the Reform group marched through, with many people who had come to daven taken aback by the scene. The event was well-documented, with dozens of photographers and video cameras present, leading many to comment that the incident had the aura of a “photo-op,” which the Reform groups would likely use for fundraising and recruitment activities in the U.S., where many of the marchers actually live.

Lending credence to the political overtones of Wednesday’s event was the presence of numerous far-left activists, including representatives of the Rabbis for Human Rights group, a Reform group that assists Palestinians by documenting “crimes” against them by Jewish residents of Yehudah and Shomron. Several of the activists have been arrested in the past for leading illegal demonstrations against IDF soldiers at the security fence.

In a statement, the Liba organization, a rightwing group that works to assist Jews in Yehudah and Shomron, said that “the Reform groups want it both ways – recognition as a legitimate ‘stream’ in Judaism, but with the option of acting against Israel and the IDF. There is a clear connection between the Reform agenda of delegitimatizing Israel and the IDF and their demands to change the status quo on religious matters. The Reform groups have close cooperation with radical Palestinian groups, and we are preparing a report on this which will be released in the near future,” the group said.