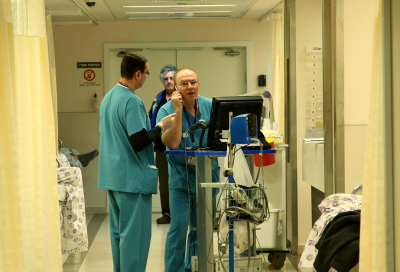 Barring any last-minute changes, staff at Haifa’s Rambam hospital will walk off the job in two weeks, after the doctors’ union declared a work dispute Sunday. At issue are budget cuts and schedule changes that the hospital intends to implement, which will affect the overtime of doctors and nonmedical staff.

There are 700 doctors on staff at Rambam, and if the hospital does not change its plans, all of them will go on strike, said Dr. Leonard Idelman, head of the union. “The changes that the hospital plans will hurt patients. The schedule changes in particular will prevent them from seeing doctors as often as they currently do. We cannot allow this to happen to patients.”

Professor Rafi Byer, director of the hospital, said that the cuts were just temporary, and would not harm patients. “We will do everything possible to ensure that there are no problems for patients as a result of these moves,” he said. “We need to undertake these steps in order to balance our budget. I am hopeful that the strike will not take place.”

Rambam is the largest hospital in northern Israel, and serves nearly a million people. If a strike does ensue, patients will be forced to travel further south for treatment. The closest major hospital is Hillel Yafeh in Chadera.