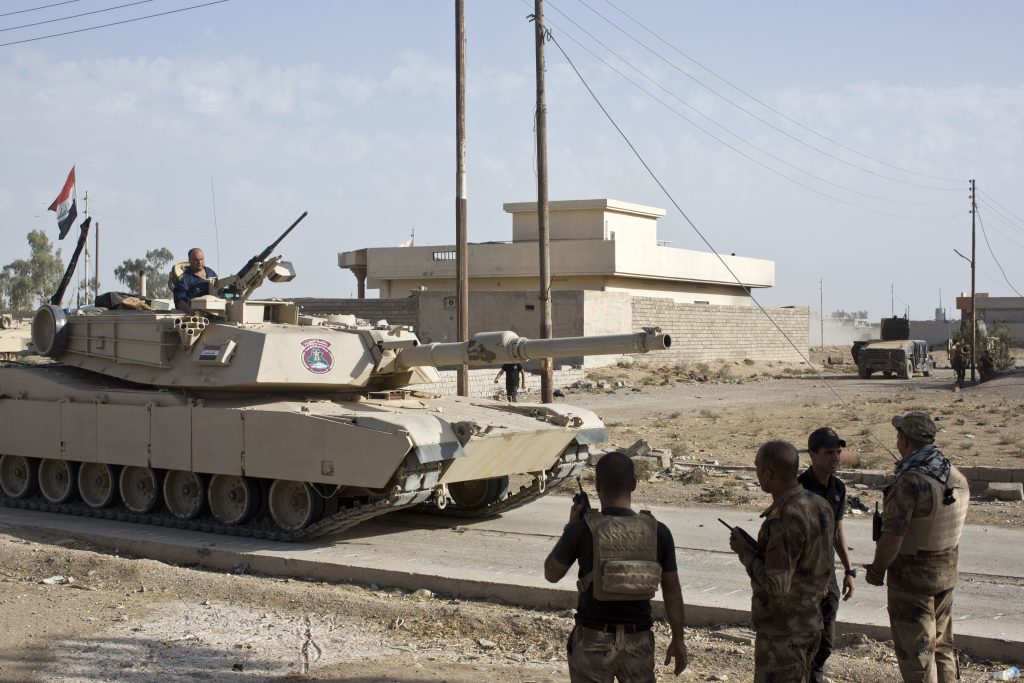 Troops opened up with artillery, tank and machine gun fire on IS positions on the edge of the Gogjali neighborhood, with the terrorists responding with guided anti-tank missiles and small arms to block the advance. Airstrikes by the U.S.-led coalition supporting the operation added to the fire hitting the district.

If Iraqi forces enter the Gogjali neighborhood it will mark the first time Iraqi troops have set foot in Mosul in over two years, after they were driven out by a much smaller group of IS terrorists in 2014. Mosul is the final IS bastion in Iraq, the city from which it declared a “caliphate” stretching into Syria. Its loss would be a major defeat for the terrorists.

From the nearby village of Bazwaya, smoke could be seen rising from buildings on the city’s edge, where shells and bombs were landing. The IS terrorists quickly lit special fires to produce dark smoke in order to obscure the aerial view of the city.

Inside the village, white flags still hung from some buildings, put up a day earlier by residents eager to show they wouldn’t resist Iraqi forces’ advance. Some residents stood outside their homes, and children raised their hands with V-for-victory signs.

The families, estimated to number in the hundreds, will be evacuated from the village to a displaced persons camp, according to Brig. Gen. Haider Fadhil of the Iraqi special forces.

For over two weeks, Iraqi forces and their Kurdish allies, Sunni tribesmen and Shiite militias have been converging on Mosul from all directions to drive IS from the city.

Entering Gogjali could be the start of a grueling and slow operation for the troops, as they will be forced to engage in difficult, house-to-house fighting in Mosul’s more urban areas. The operation is expected to take weeks, if not months.

Iraqi forces have made uneven progress in closing in on the city. Advances have been slower to the south, with government troops still 20 miles away. To the north are Kurdish forces and Iraqi army units, and Shiite militias are sweeping toward the western approach in an attempt to cut off a final IS escape route.

The Shiite forces, Iran-backed troops known as the Popular Mobilization Units, are not supposed to enter Mosul, given concerns that the battle for the Sunni-majority city could aggravate sectarian tensions.

Just behind the eastern frontline, the army’s ninth division had moved toward Mosul on the path cleared by the special forces, and was now approximately 3 miles from its eastern outskirts.

The U.S. military estimates IS has 3,000-5,000 terrorists in Mosul and another 1,500-2,500 in its outer defensive belt. The total includes about 1,000 foreign terrorists. They stand against an anti-IS force that including army units, militarized police, special forces and Kurdish fighters totaling over 40,000 men.

As the Mosul offensive has pressed on, bombings have continued in the capital, Baghdad, part of sustained IS efforts to destabilize the country. Dozens have been killed since the push on Mosul started – in apparent retaliation attacks.