Clinton and Trump Prepare for Possibility of Election Overtime 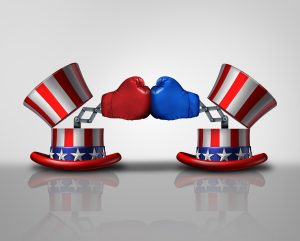 Hillary Clinton and Donald Trump are arming up for a possible post-Election Day battle.

Clinton is assembling a voter protection program that has drawn thousands of lawyers agreeing to lend their time and expertise in battleground states, though the campaign isn’t saying exactly how many or where. It is readying election observers in Florida, North Carolina, Pennsylvania, Ohio, New Hampshire, Iowa, Nevada and Arizona to assess any concerns — including the potential for voter intimidation — and to verify normal procedures.

The Republican National Lawyers Association, which trains attorneys in battleground states and in local jurisdictions where races are expected to be close, aims to assemble 1,000 lawyers ready to monitor polls and possibly challenge election results across the country. Hedge fund manager Robert Mercer, one of Trump’s biggest backers, has sunk $500,000 into the group, its biggest donation in at least four presidential elections, Internal Revenue Service filings show.

“We are fighting for open, fair and honest elections,” the association’s Executive Director Michael Thielen said in an email.

Most discussion about the potential for a contested election until now has revolved around the premise of a Trump loss, his contention that the election is “rigged” and his refusal to say ahead of time that he would concede. But since FBI Director James Comey’s controversial disclosure on Friday that he is reviewing newly discovered emails possibly related to an investigation of Clinton, several polls have shown the race tightening considerably.

Although Clinton still holds an advantage — currently 2.5 percentage points in the RealClear Politics average of national polls — the developments have raised the prospect of a much closer than expected result and a previously unforeseen question: Would Clinton refuse to concede and wait for recounts and certified results or initiate legal action if she narrowly loses one or more battleground states decisive to the election?

“If the perception is we’re heading into a close election and it actually is close, then you’d have the sense that the candidates — maybe on both sides — would say, ‘Well, we’ve really got to make sure we look at every ballot,’” said Edward Foley, director of the election law program at Ohio State University’s Moritz College of Law.

In the final presidential debate, Trump surprisingly said he would “keep you in suspense” on the question of whether he’d accept the election results. For the Clinton campaign, what Trump says on election night, even in the face of a clear loss, is the least of its concerns.

“If he just simply refuses to concede that night, which is a possibility we’re increasingly bracing for, we don’t think that is a worrisome prospect,” Clinton campaign spokesman Brian Fallon said last week. The campaign is preparing more for traditional legal challenges.

While a concession from a presidential candidate has cultural significance in helping the country accept the result and move on, it has “no legal status whatsoever,” Foley said.

The only thing that counts is the count — and then maybe the recount.

Each state releases an unofficial vote on election night that is made official after a post-election canvass confirms the accuracy. When a state certifies its official result, that determines the slate of Electoral College electors who meet Dec. 19. Congress accepts that vote on Jan. 6 to declare a president-elect.

Foley said there are three scenarios to watch for on election night: a blowout; an election in which the race in one or more states needed for one of the candidates to get the 270 electoral votes needed to win is too close to call and recounts are needed, as in Florida in 2000; and a close race where the unofficial vote shows a winner but there are questions about whether uncounted absentee or provisional ballots could change the outcome, as in Ohio in 2004, when John Kerry waited until the morning after the election to concede.

In a blowout, whether the losing candidate concedes won’t matter because the distribution of Electoral College result will be clear once state results are certified.

If the race is too close to call in one or more states and the Electoral College outcome is in doubt, the winner may not be determined until the official state results are certified. That’s what happened in the 1884 and 1916 presidential elections, when the losing candidates waited until the official results to concede but there was no civil unrest, Foley said.

In 2000, Democrat Al Gore retracted his election-night concession after it became clear Florida was too close to call with him trailing George W. Bush by only a few hundred votes in the state. After a month-long legal fight, Gore conceded after the U.S. Supreme Court barred further recounts.

Trump has been fanning doubt about the vote count by repeatedly talking about a system that is “rigged” against him. Still, his running mate, Indiana Gov. Mike Pence, has rejected the notion that the campaign is fostering the idea the election result might be invalid because of fraud.

“When Donald Trump talks about a rigged election, we’re talking as much about the documented bias in the national media that seems to be doing half of Hillary Clinton’s work for her every day,” he said Friday on MSNBC.

The losing candidate’s ability to contest the results with a recount depends in part on how close the unofficial results are and where. The nation’s capital and 20 states, including a handful of battleground states, call for an automatic recount if the margin is narrow enough, such as 0.5 percent or fewer of the total votes cast in Florida, according to the National Conference of State Legislatures.

If a recount is not an option, losing candidates still may seek to challenge the election results or the circumstances preceding those results in the courts.