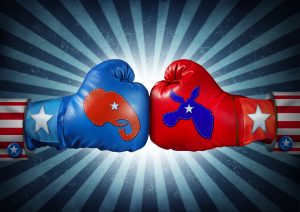 The parity in basic popularity undermines a key advantage for Clinton throughout most of a presidential campaign, where Trump set records as most unpopular presidential candidate in polling history. Clinton’s ratings were consistently negative, but were only rarely as troubled as her opponent’s.

Vote preferences among likely voters continue to be closely divided in the Post-ABC Tracking Poll, with Clinton at 46 percent and Trump at 45 percent, the same split as the previous wave reported Sunday. In a two-way matchup excluding third-party candidates, voters split 49-47 between Clinton and Trump; the margin was 49-46 percent in the previous daily tracking poll.

The tracking poll, conducted Wednesday through Saturday, found little immediate impact in presidential support after FBI director James Comey’s Friday announcement that the agency will review additional emails from Clinton’s time as secretary of state. In combined results from Friday night and Saturday, voters split 45 percent for Clinton and 46 percent for Trump, statistically unchanged from Clinton’s 47-44 margin on Wednesday and Thursday. Results in coming days will provide a clear sense of the event’s impact. The Post-ABC poll also found no significant shifts in Clinton’s or Trump’s favorability through Saturday.

Clinton’s and Trump’s parity in favorable ratings contrasts with a Post-ABC poll earlier this month where Trump’s negative ratings exceeded Clinton’s by six points (63 percent vs. 57 percent), with his strong negative ratings outpacing Clinton’s by nine points (53 vs. 44 percent) among registered voters. Clinton and Trump previously held similar negative ratings in Post-ABC polls of registered voters at three points in the campaign — in May after Trump effectively clinched the Republican nomination, in late August and in mid-September, just before the first fall debate.

The tightening gap between Clinton and Trump’s ratings results from slightly improved ratings for Trump and slightly weaker ratings for Clinton than in mid-October. In net favorable ratings, the percent favorable minus percent unfavorable, Trump’s image stands at -22 in the new poll compared with -28 earlier this month among registered voters. Clinton’s current -21 net favorable rating compares with -17 after the final debate two weeks ago. Neither change in each candidates’ ratings is statistically significant on its own, though Clinton’s significant edge over Trump in mid-October no longer stands.

One particular group where Clinton saw a decline drop-off in favorability was among white men. In mid-October, 32 percent were favorable of the former secretary of state while 67 percent were unfavorable, but negative ratings have ticked up to 74 percent while positive marks are down to 24 percent. Trump’s ratings stayed pretty stable among this group since earlier this month, standing at 45 percent today compared with 43 percent following the final presidential debate.

Political independents recoil at both major-party candidates as neither has maintained a stable advantage with the group, but the latest tracking poll finds the group seeing Trump in a less negative light than Clinton. A 58-percent majority of independent registered voters have an unfavorable view of Trump, rising to 69 percent unfavorable for Clinton. Trump holds a 17-point edge in vote preference among independent likely voters (51 to 34 percent).

The unpopularity of both major candidates has left a significant minority of voters holding unfavorable views of both Clinton and Trump, accounting for 36 percent of likely voters in the new Post-ABC poll. When asked who they currently support, these voters lean toward Trump over Clinton by a slight 37 to 31 percent margin, while 12 percent choose Gary Johnson, 7 percent Jill Stein and the rest saying they are not supporting any candidate at the moment.

This Washington Post-ABC News poll was conducted by telephone October 26–29, 2016, among a random national sample of 1,776 adults including landline and cell phone respondents. Overall results have a margin of sampling error of plus or minus 2.5 points; the error margin is plus or minus three points among the sample of 1,165 likely voters. Sampling, data collection and tabulation by Abt-SRBI of New York.