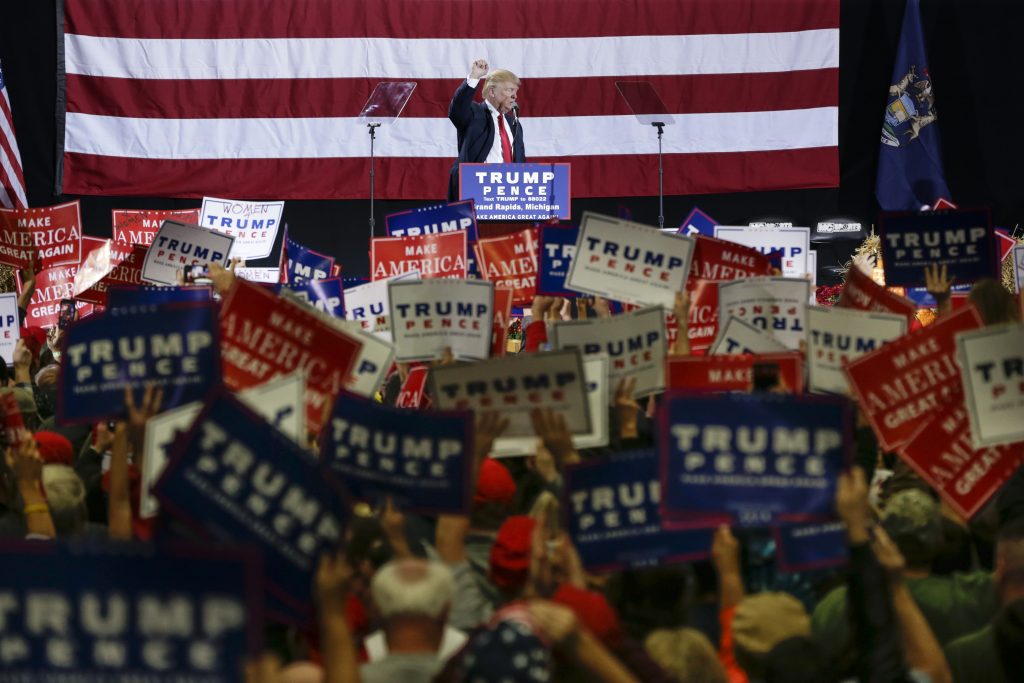 Newly emboldened, Donald Trump is campaigning in traditionally Democratic states after the recent discovery of more emails that may be relevant to the FBI’s investigation of Hillary Clinton’s private system.

Clinton, now on defense, is trying to shift the election back to a referendum on Trump’s credentials and temperament, as she enters the final full week of the presidential race.

Clinton, who was to campaign Monday across Ohio, vowed over the weekend that she would not be “knocked off course” in the election’s final days by the discovery of new emails in an unrelated investigation. It is unclear what is contained in the emails or if any of them were sent or received by Clinton herself.

Aides said she would use a speech at Kent State University to cast Trump as unfit to be commander-in-chief and dangerous to national security. Her team released a nuclear-war ad, titled “Daisy 2.0,” that aims to revisit a 1964 ad against GOP nominee Barry Goldwater.

“I’m not stopping now, we’re just getting warmed up,” Clinton declared during a packed rally in battleground Florida Sunday. “We’re not going to be distracted, no matter what our opponents throw at us.”

Trump, bolstered by FBI Director James Comey’s letter on the emails, believes he has momentum heading to the final full week of the campaign. But the electoral map remains challenging, forcing the Republicans to make some unlikely late forays into blue-leaning states in an effort to counteract the Clinton campaign’s strength in banking early votes and organizing for Tuesday’s turnout.

On Monday, Trump was slated to hold a pair of rallies in Michigan, which last went for a Republican presidential nominee in 1988. The day before, he held an evening rally in New Mexico — his first since becoming his party’s nominee — which is a state that has gone for the GOP only once since 1988. An on Tuesday, he’ll appear with his running mate, Mike Pence, in Wisconsin, which hasn’t voted for a Republican president since Ronald Reagan’s re-election in 1984.

The Trump campaign — which aims to make attacks based on the Clinton emails and “Obamacare” premium hikes the centerpieces of their argument — believes that white working-class voters in the Midwest could tip Michigan or Wisconsin his way, especially if he benefits from reduced enthusiasm for Clinton in African-American strongholds like Detroit and Milwaukee. New Mexico is seen as a longer shot, with Trump’s hard line immigration stance a harder sell in a state with the highest percentage of Latino voters in the nation.

Trump has consistently trailed in the polls in all three of these states, but his last-minute plays there this week reflect his need to flip at least one traditionally Democratic-leaning state. While Trump has not given up on Pennsylvania — he’ll campaign there again on Tuesday — he remains behind, and a loss there narrows his path considerably.

Even if he wins the traditional battlegrounds of Ohio and Florida, he’d almost certainly need to pluck one from the blue-leaning trio he’s visiting early this week — as well as a state like New Hampshire, Nevada or North Carolina — in order to overcome Clinton’s map advantage.

And the ongoing fractures within the Republican Party likely won’t help: House Speaker Paul Ryan is not expected to appear with Trump in his native Wisconsin.

Clinton’s advisers and fellow Democrats, furious over the vague letter sent by FBI Director Comey to Congress Friday, have been pressuring him to release more details about the emails, including whether Comey had even reviewed them himself. Former Attorney General Eric Holder, who’s been featured in an ad for Clinton’s campaign, described Comey’s actions as “deeply troubling” and a violation of “longstanding Justice Department policies and tradition,” in an article published in The Washington Post on Monday.

A law-enforcement official confirmed late Sunday that investigators had obtained a search warrant to begin the review of Abedin’s emails . The official has knowledge of the investigation, but was not authorized to speak publicly and did so on condition of anonymity. The official said investigators would move expeditiously but would not say when the review might be complete.

In a letter to Congress on Friday, Comey said the FBI had recently come upon new emails while pursuing an unrelated case and was reviewing whether they were classified.

The controversy over Clinton’s email practices while she served as secretary of state has dogged her for more than a year.

Meanwhile, the campaigns continued their early voting push, with Democrats claiming an edge in Nevada and Colorado. New reports from the weekend found that more than 20 million voters had already cast ballots.