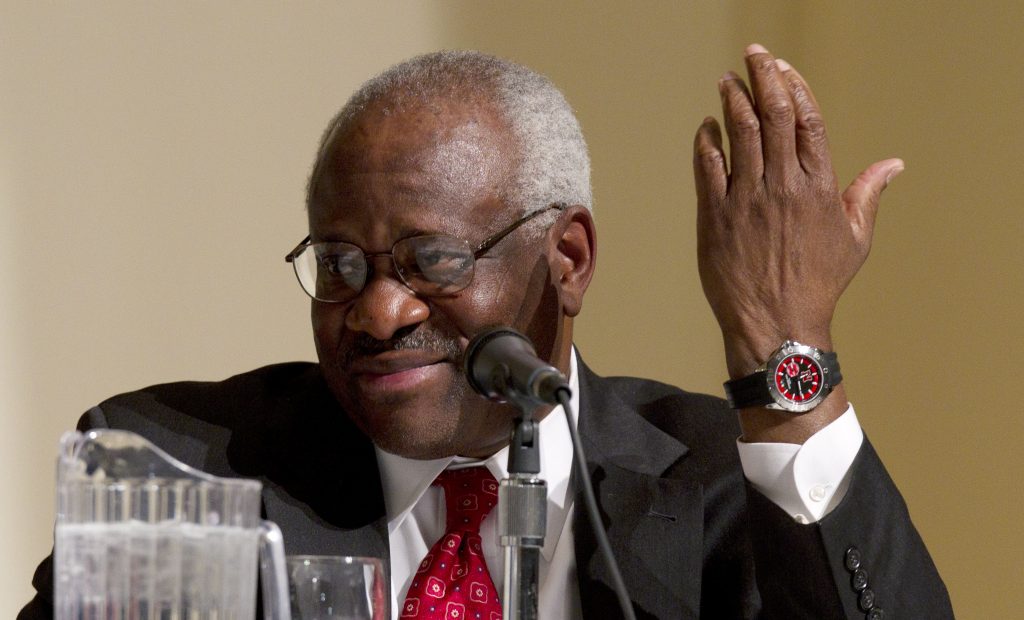 In October 1991, Clarence Thomas was forever sealed in American consciousness when he was confirmed as the second African-American associate justice of the United States Supreme Court.

With 25 years on the bench, the Georgia-born jurist has now served one year longer than the man he replaced — Thurgood Marshall, who was the highest court’s first black justice.

But when the National Museum of African American History and Culture — a grand Smithsonian cathedral celebrating 400 years of black struggle and achievement — opened last month in Washington, Thomas was barely mentioned.

Linda St. Thomas, chief spokesperson for the Smithsonian Institution, said “there are many compelling personal stories about African-Americans who have defied the odds and forged remarkable careers. Justice Thomas is one of them. We recognize that we cannot tell every story in our inaugural exhibitions, and we will continue to evolve and change over time as we interpret the African-American experience.”

St. Thomas said there are 3,000 items, including photos, on display in the museum, a fraction of the thousands of items the museum has collected.

Clarence Thomas’s supporters aren’t having it.

Calling the conservative justice a “uniquely American story, in all its complexity,” the petition, which thus far has about 7,300 signatures, argues that Thomas has been shunned by the liberal black community because he has spoken out against affirmative action.

The petition states: “Curators at the museum singled out Thomas due to his unique views on race and his conservative thought that the federal government is the greatest threat to our individual liberties. The museum highlights people of less noble endeavors, and it is unfathomable to think the curators were not open-minded enough to include all historically significant African-Americans, no matter their political beliefs.”

For all that Thomas has achieved, he remains one of the most polarizing figures in American history.

“I don’t agree with him and I don’t understand where he comes from. But he is clearly the product of the black experience in America,” said former congressman, U.N. ambassador, Atlanta mayor and civil rights leader Andrew Young, who has yet to visit the museum. “I have never given up on him and he belongs there.”

Born in Savannah, Thomas breezed through Yale Law School and by 1982 was appointed chairman of the Equal Employment Opportunity Commission (EEOC). In 1991, President George H.W. Bush nominated him for the Supreme Court to fill the seat once held by Marshall, who had retired. Marshall, a legendary civil-rights figure, died in 1993.

He was ultimately confirmed, but he is unpopular among African-Americans due to his conservative rulings.

Samuel F. Mosteller, the Georgia president of the Southern Christian Leadership Conference, said Thomas being the second black U.S. Supreme Court justice is not reason enough to merit his inclusion in the new Smithsonian museum.

“Clarence Thomas is a mediocre jurist at best,” Mosteller said. “All he has done is pander to the far right and whatever Antonin Scalia told him to do. He has not been fair and is a one-trick pony.”

But William Boone, a political scientist at Clark Atlanta University, argues that while Thomas’ views run counter to those of mainstream African-Americans, it would be dangerous to try to rewrite him out of history. Janice Mathis, executive director of the National Council of Negro Women, agrees.

“He was not a worthy successor to Thurgood Marshall, but he is part of history,” Mathis said. “I don’t believe in revisionist history. History speaks for itself. He stands for the principles that not all blacks think alike.”