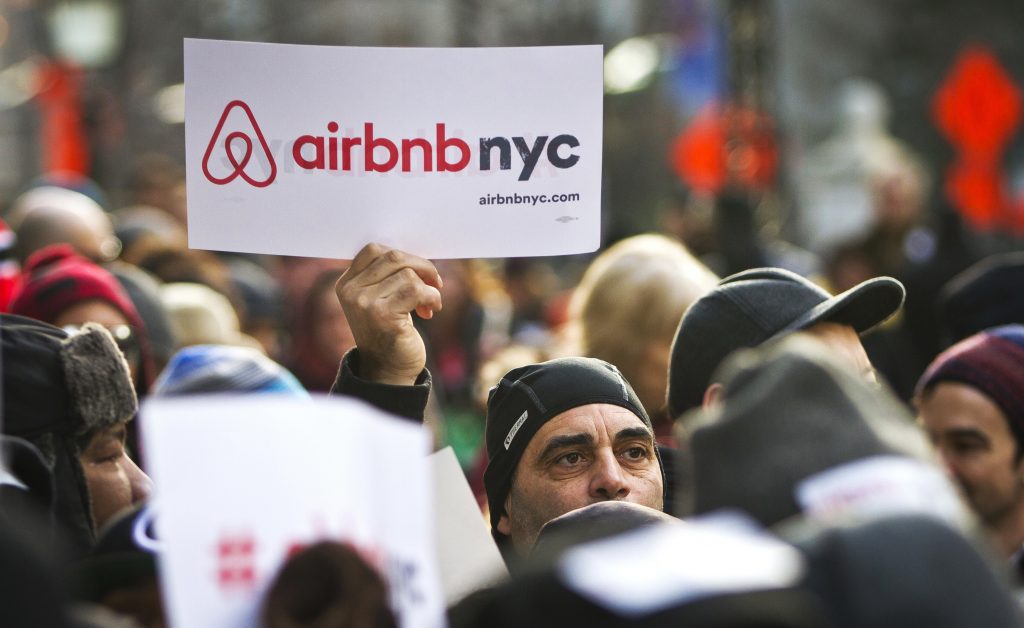 Money is tight for Jordan Reeves. So when he is not home, he rents his Brooklyn apartment through Airbnb for extra cash.

But a new law that carries fines of up to $7,500 for certain kinds of short-term listings is causing headaches for many Airbnb hosts, including Reeves, who say they are getting unfairly swept up in a measure that’s more aimed at commercial operators who turn multiple apartments into, essentially, illegal hotels.

“Nobody wants illegal hotels … It seems as though we’re in the same bucket as the people who are taking advantage of the situation,” Reeves said, as he and a group of other hosts gathered across the street from Gov. Andrew Cuomo’s office last week to protest the law.

Signed by Cuomo, a Democrat, on Oct. 21, the law is one of the toughest in the country against Airbnb and other home-sharing platforms. It levies hefty fines against owners or tenants who offer to let others rent out their entire living space for less than 30 days, something that’s been illegal in New York for several years but didn’t previously carry such penalties. Under the new law, people can still rent out portions of their living spaces, like a single bedroom or a couch, for less than 30 days. It also doesn’t apply to some dwellings, like single-family homes or row houses.

Airbnb protested the law, saying New York was rewarding the hotel industry at the expense of New Yorkers, and has filed a lawsuit against it.

Supporters of the law said it was necessary, that some property owners take apartments that could be homes for city residents out of circulation to make them short-term visitor rentals, hurting both the city’s hotels and its housing market.

State Attorney General Eric Schneiderman’s office conducted an investigation of Airbnb rentals from 2010 to 2014. It found that 72 percent of the units listed in New York City were illegal, and that 36 percent of rentals came from commercial operators who made up only 6 percent of hosts.

Eileen Guo, a Queens resident who has used Airbnb to rent out her studio apartment, said that while the industry needed to be regulated, “there needs to be a distinction, people that live in our homes and also use it for side income and people who are doing it purely for profit.” She said the law would limit her already occasional use of the platform to times when she knew she would be able to offer it for more than 30 days.

Jenny Douglas went the other way — changing the wording on her listing to make it clear to anyone looking that her Brooklyn apartment, on the garden level of her single-family home, wasn’t covered by the law and was available for short stays.

She said she was “a little panicked” before she did some digging and realized the law didn’t apply to her. But she was concerned potential renters, hearing about the law, would be reluctant to look at New York City listings, so she made the change.

“I wouldn’t want them to feel anxious that they might come here and the door might be padlocked,” she said.

While Douglas said she hoped the law Cuomo signed wouldn’t be the last word on the subject, she did think it was an issue that needs to be figured out. “It feels like this probably needed to happen in order for us to look at what we’re dealing with.”

Michaela Hall, who used Airbnb to find a last-minute place to stay when she came to New York City last month, said she was concerned about the impact of the law on prices. She prefers to rent out entire apartments with the residents gone, as opposed to sharing a portion of a home with the tenant there.

If there are going to be fewer entire apartment listings, and less competition, “then people will probably raise their prices a little bit,” the Maryland woman said. “Hopefully they won’t go too high so that I’m not saving anything over reserving a hotel room.”